Why Every American Should Read The 1619 Project 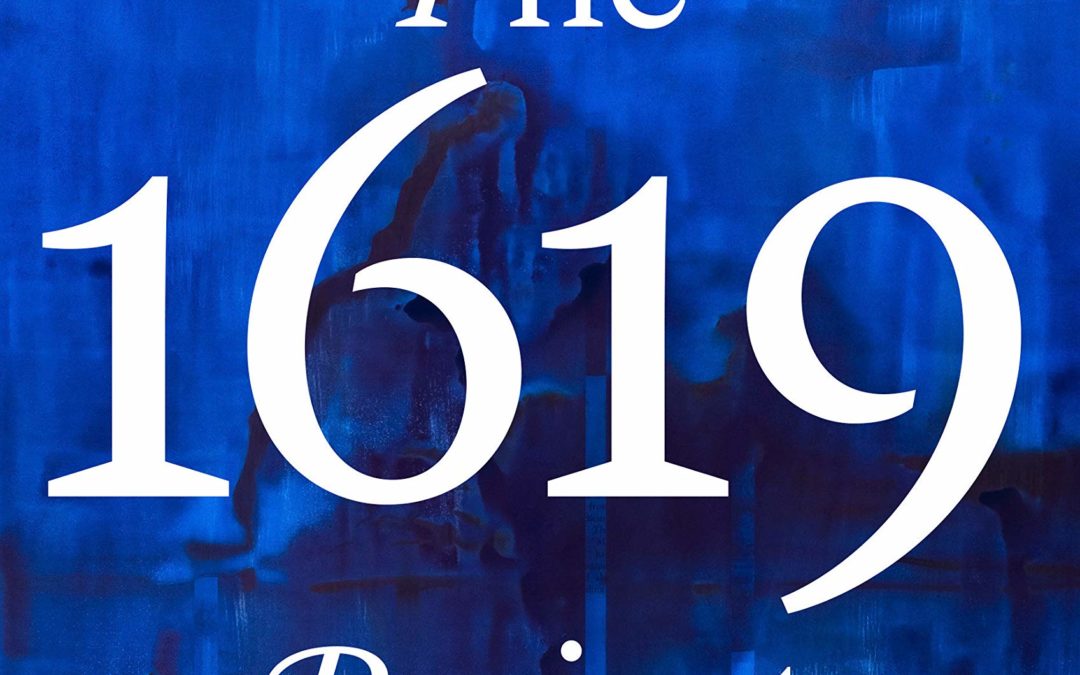 How could a book about history create such an uproar? Most Americans are oblivious to history, and rarely celebrate it except on Memorial Day, July 4 and Veterans Day. Actually, only a small fraction focus on the history while the rest of us enjoy a day off from work or the normal humdrum of life. So why has the book The 1619 Project caused such a stir? Parents are harassing school boards and teachers for supposedly teaching Critical Race theory and they are up in arms about a book about the history of racism in the United States called The 1619 Project.

I recently finished reading this  ”controversial” book and am convinced that every American, given the opportunity, should read this well-researched, superbly written text. While most of the volume consists of essays by renowned scholars, there are also pictures, historical vignettes, and poetry included as well. It is a treasure trove of information and insight. Based on a series of articles that first appeared in the New York Times in 2019, the 400th anniversary of the arrival of Africans to these shores, the book is an expansion of this original project.  Having read many of the articles and listened to an accompanying podcast, I was interested to see what this expanded version could offer. I was so impressed I came away believing, despite the controversy, that every thinking American — Black, White, Latino, AAPI, Native American, Conservative, Liberal and in-between — needs to read this book for at least three reasons.

To Fill Out Our Understanding of American History

First of all, this text fills out our understanding of our history as Americans. For starters, most probably don’t think of Black people being among the first immigrants to the country. And yet it is documented that a Spanish slave ship was intercepted by English privateers and landed near modern-day Hampton, Virginia in 1619. In the Preface, editor Nicole Hannah-Jones says that the primary goal of the book is to show how slavery and anti-Blackness is foundational to the story of America and that the struggle of Black Americans for full rights as citizens is an ongoing theme in our history. Even if one does not agree at the outset with this framing, we owe it to the writers to hear how they make their case.

The essays that comprise The 1619 Project provide this fuller point of view. It is an oft unacknowledged fact that some of our iconic  American historical figures — people like George Washington Thomas Jefferson, Abraham Lincoln, Franklin D.  Roosevelt, just to name a few — supported and  promoted racist policies during their lifetimes. This does not discount the great service they gave to this country, but it does put them in clearer perspective as products of their time.

So, for instance, when the nation’s Capital was in Philadelphia, President George Washington would rotate his slaves in and out of the city, so as not to run afoul of anti-slavery prohibitions. Thomas Jefferson, author of the Declaration of Independence and our third President, was a brilliant scholar in many disciplines, spoke several languages fluently, and even wrote a tract advocating for the abolition of slavery. However, throughout his lifetime 400 slaves worked on his plantation at Monticello and he fathered several children by a young slave named Sally Hemings.

Abraham Lincoln is often credited with “freeing the slaves,” but he was not always in favor of emancipation but had to come to that position by necessity over time. Prior to releasing the Emancipation Proclamation, Abraham Lincoln believed freed slaves should be exported out of the country and so sent envoy to Panama to see if all Black people released by his forthcoming edict could be shipped to relocate there. Fortunately, that foray turned out to be a folly and he announced the Proclamation anyway and came to be known as the Great Emancipator.

Franklin Delano Roosevelt considered one of the nation’s most progressive presidents, backed away on several occasions from instituting policies that provided full rights for Black Americans in the army for their patriotic service.  These iconic American leaders and others like them, whom we rightly revere for helping our country become what it has become, were not free of the racist attitudes and practices of the time. To not tell the full story is to mislead and misinform us of their humanness.

I don’t find these revelations offensive or guilt-producing. Rather, they let us know these great men were products of their time and had flaws like all of us. Not only that, while they may have had one set of views at one point in most cases they grew and developed. They serve as an example to us all not only their great deeds but the capacity to grow and change into fuller and more compassionate people — something we could all use some help with these days.

To Help Us Understand Our Dual Racial History

The second reason we need to read this book is that the story of overcoming racism in this country is not a straight line of upward racial progress. When the question of whether racism still exists in America comes up, most white Americans of my age will point to Martin Luther King’s “I Have a Dream” speech and the victories of the Civil Rights Movement like the passage of the Voting Rights Bill. Younger folks will point to Barack Obama and the election of the first Black president. However, in his essay entitled “Progress,” Boston University Professor Ibram X. Kendi, contends the United States has “a dual racial history of two opposing forces: historical steps toward equity and justice and historical steps toward inequity and injustice” (p. 424).

The examples of this dual racial history are nearly endless. And yet because of our ignorance and disinterest in history as a people, we have been duped into believing feel-good myths about racial progress in our country without also having seen the counter-balance of inequities that still remain, have stayed the same or gotten worse over time. Whites are shocked and offended by African Americans asserting that their lives matter and that police violence against them must be eliminated. Too often white Americans don’t see that the progress that has been made against racism is countered by its persistence in other ways. Certainly, in many ways, things are better for Black Americans, but they are better for all Americans and the benefits have not always been equally and fairly shared.

To Reveal Our Family Secrets

The third reason for reading this book is that it reveals our national family secrets. All families have events that occur in their lives together that are known to only the members of those families, and often only to a handful of those family members. They are the things that no one talks about and yet have a deep and lasting effect on the way people relate, communicate, deal with conflict and interact with the world outside that family. Sometimes these secrets can be benign and harmless but often they are secrets about abuse, addiction, violence, mental illness, unresolved conflicts, or just unsavory actions of venerated ancestors going back generations.  In those cases these secrets have crippling effects on everyone in the family that distort their sense of who they are.  And yet, instead of facing the truth of those secrets, all too often families will work overtime to cover them up and promote the lie of a happy, healthy family. While this cover-up may fool those outside the family, the real damage is to those in the family.

I believe that the controversy and opposition surrounding this book is not just that it makes people feel guilty (which it might, but not necessarily so) or that it promotes Black superiority over white folks (which it doesn’t), or that it paints white people in an unfavorable light (which in some cases it does), but rather that it reveals some of the most destructive family secrets of our history as a nation. For instance, the chapter on Capitalism by Matthew Desmond shows how our economic greatness was built not on American ingenuity but rather on the free labor of millions of slaves. Jamelle Bouie’s chapter on Politics reveals how votes by Black people, poor whites, and non-white immigrants have always been suspect to the wealthy elite.  Anthea Butler’s chapter on the Church shows how religion has always been used to justify violence against others both within this country, as in the case of slavery and lynching, and against those from other countries in the case of war. These are the secrets of our history we choose to deny and yet continually haunt us.

By simply telling these untold aspects of our history. The 1619 Project challenges the myth of American exceptionalism that every political leader seems beholden to promote. It shows that while we are trying to promote democracy around the world, as a nation, we have never fully embraced democracy as something for every American. While we position ourselves as a superpower and an exemplar to the world, we have some of the highest rates of infant mortality, mass incarceration and mass violence against our own citizens than any county in the world. These are not idle tales but documented facts from which most Americans have chosen to hide. And yet unless we face these family secrets, we will continue to stumble around and ultimately destroy ourselves. In fact the denial of the truth about ourselves has gone so far that we have become divided over whether or not a duly-elected candidate was elected president and instead promote lies, threaten violence and seek to undermine the very system we say we support.

There is no doubt that The 1619 Project is some hard medicine for many Americans to swallow. We have been duped by our education system, our political leaders, our criminal justice system, and the corporate world that we are the greatest nation in the world. To suggest otherwise is to be considered unpatriotic. Perhaps we are by some measures.  But by others, we are a broken, deluded, and divided nation in large part because we have not come to grips with the errors of our past which continue to haunt us. I have spent much of my career studying and teaching about the history of racism in our country and there were many things in this book that were new to me, and it was uncomfortable to admit, but so helpful to know. Were I still teaching those courses, The 1619 Project would be required reading.

I love our country, but I also want to know my country. Every patriotic American should want that. That’s why we all should read and learn from The 1619 Project.