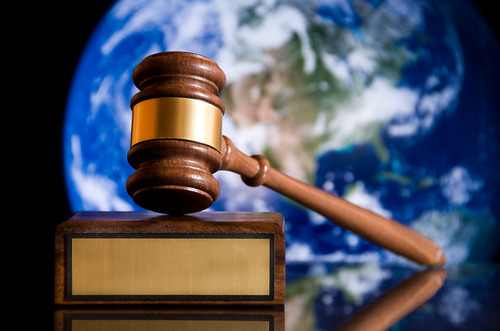 On Monday, August 8, FBI agents entered the resort owned by former President Donald Trump in search of classified materials he had illegally taken from the White House when he departed under protest in February 2021. They left with eleven boxes of documents many of which were deemed “Top Secret.” This raid came on the heels of two months of televised hearings conducted by the House of Representatives Special Committee investigating the January 6, 2021 attempt to overtake the U.S. Capitol building and halt the peaceful transfer of presidential power from Trump to newly elected President Joe Biden. At the same time, Trump is also being investigated by Attorneys General in New York State and Atlanta, GA for other related offenses. Trump and his minions claim all these actions are “political.” Of course, they are – all the major players are politicians, as well as those with Trump crying “foul.” The fact is the January 6 hearings found major offenses that are worthy of jail time. Yet many people I know, including myself on some days, don’t believe Trump will stand trial for any of his many offenses.

Which brings to mind my topic – the different types of justice that are practiced in the United States: one justice for the super-wealthy and powerful, another justice for the average American citizen, and finally, a third justice for the poor and racially marginalized. Let me offer a couple of examples of what I am referring to.

Both the January 6 Committee, the DAs in New York and Atlanta, and more recently the U.S. Department of Justice, have issued subpoenas to several of Trump’s advisors, only to be met with overt defiance and resistance. Steve Bannon, a Trump loyalist, and former advisor was convicted and sentenced to anywhere from 30 days to a year for two counts of Contempt of Congress. However, he is the only one to have been held accountable. Sen. Lindsay Graham is appealing a court order to meet before the Atlanta grand jury for attempting to change the outcome of the Georgia vote count in the 2020 presidential election. Almost all of Trump’s closest advisors on January 6 have refused to speak to the House committee. And it goes on. Lower officials have testified, but the main players continue to defy subpoenas.

Now if I were to be subpoenaed by a legal entity for any offense, I – like most Americans – would have no choice but to respond, or the police would be at my door and force me to be present. I don’t have access to a cadre of high-priced lawyers to argue on my behalf, nor the money to pay them. So, I would have to go whether I want to or not.

Now if I was poor, or Black or Latinx or an undocumented immigrant, police would not bother with a subpoena, and, if they hadn’t shot and killed me, they would drag me into the station and lock me up for months before my initial hearing. I would perhaps have access to an overworked, underpaid public defender assigned to my case, but without money for bail, I would sit behind bars for months if not years, while I lost my job and my house, while my dependents struggled to make ends meet, and while I am branded a “criminal,” before I even went to trial. The court and perhaps my lawyer would try to convince me to settle, whether I was guilty or not, to make things go faster and easier. If I was a low-income and/or marginalized person, the so-called justice system does not work for me, it just treats me as a nobody, not worth their time or energy.

Can one imagine this to be the experience of Donald Trump, Lindsay Graham, Steve Bannon, and the other minions around the former President? In fact, it is no surprise that Steve Bannon is not in jail but appealing his sentence and not serving the time allotted to him. When it comes to subpoenas there are different kinds of justice – one for the wealthy and well-connected, one for the average citizen, and no justice and perhaps loss of life and wellbeing for the poor and racially marginalized. Even the folks raiding the Capitol on behalf of Trump haven’t gotten off their sentences. Did Trump send his lawyers to help those convicted supporters? Doesn’t look like it.

Another example comes from one of the early January 6 televised hearings back in June. Through extensive interviews and research, the committee reported that after Trump lost the 2020 election and started crowing that the election had been stolen, he announced he was establishing a special fund to raise support for his legal defense. However, as the committee reported, there was no such fund ever established. In fact, the $250 million raised was sent to several PACs under the Save America political action committee, which then sent it to several pro-Trump organizations, and his Washington hotel, and used it toward other personal costs to Trump and his family. This kind of deceitful misuse of money is at the heart of the case against Trump in New York, for similar actions taken when Trump headed up his business empire. In fact, Allen Weisselberg, former Trump Organization Chief Financial officer (CFO), has pled guilty to tax fraud during his many years working for Trump and will go to jail.

Despite his healthy connections to power, Weisselberg was not spared from a conviction for his misuse and deceitful reporting of income in the Trump organization. Nor would I be. If I announced a Go-Fund-Me page for a personal concern, and then used the generous gifts of my friends for something un-related, I not only would lose many friends, but the IRS or someone who handles financial fraud would eventually catch up with me because I have neither the connections nor the funds to hire lawyers to cover up my crime.

Back in the under-resourced communities of my city and in cities and rural communities across the country, there is a totally other reality; there is what is called the “underground economy.” Most often this underground economy is linked to the buying and selling of illegal drugs, but it also involves the straw purchasing of firearms, the catering of food for parties and gatherings, doing menial work and getting paid in cash “under the table,” fixing up cars for cash, putting misleading information on welfare applications to get a bit more benefit and the like. The wealthy politicians often scapegoat such folks as “cheaters,” thugs” and a drag on the economy. While I certainly do not condone the sale of illegal drugs or straw purchasing of firearms, I understand why they do it. These folks are trying to survive in a nation that does not regard them as people of worth and value. Decades ago, when I was a youth worker in a low-income neighborhood of Boston, I was on a first-name basis with several drug dealers. They were using the same business methods as those working in the corporations downtown, they were trying to put food on the table, pay rent and generally “make a living.” For reasons only money can buy, the folks in the underground economy are seen as “criminals,’ while their counterparts on the other end of the economic spectrum are called “good businesspeople,’ crafty dealers, and somehow a cut above the rest of us – and free of legal consequences.

What we call “justice” is not the same for everyone. Some of the legal arguments made by Trump and his supporters make is that some of his unethical actions are technically “legal,” which only serves to 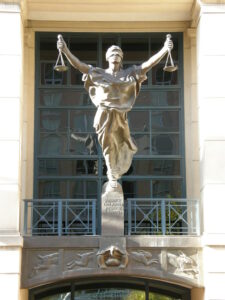 make my point — the law treats people differently based on their position in society. Some also might object to my comparing a drug dealer to a corporate executive, or an undocumented immigrant paid “under the table” to a former President, but the fact is, “justice” – if we can even call it that – is not the same for all. A lot of the discrepancy lies in the access people at all levels have to attorneys. And these attorneys knowingly defend and obfuscate cases that are illegal. But these lawyers are good at playing the game and so delay the due process that should involve all persons accused of a crime.

On Friday, August 26, The New York Times came out on the Editorial page with an Op-Ed entitled, “Donald Trump Is Not Above the Law. “ We’ll see. What we can see is that justice as practiced in this country is not blind, but has its hand out to the wealthy and powerful while it evaluates the worth and value of the rest of us based on the category of justice we fit into.

NOTE – I am Professor Emeritus from Eastern University where I taught courses on social justice, racism, and social change. I also have been active in organized efforts to address issues of biased and disparate education funding, gentrification, racial discrimination, and the illegal sale of guns through straw purchasing. These thoughts come out of my years of studying, teaching, and seeking to work for true justice in our society.