The God That Fails 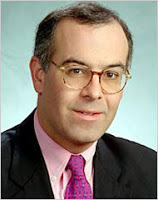 I was thinking about all the wasted energy being spent by the media and others trying to find a scapegoat for the fact that a would-be terrorist got through the checkpoints and protocols and nearly blew up a plane on Christmas Day. As awful as such a tragedy might have been, finding a scapegoat rather than learning from the experience seems a real waste of time. Then I came across a column by David Brooks that said it much better than I ever could. So I reproduce it below or you can go to the following link.

The God That Fails
By DAVID BROOKS

During the middle third of the 20th century, Americans had impressive faith in their own institutions. It was not because these institutions always worked well. The Congress and the Federal Reserve exacerbated the Great Depression. The military made horrific mistakes during World War II, which led to American planes bombing American troops and American torpedoes sinking ships with American prisoners of war.

But there was a realistic sense that human institutions are necessarily flawed. History is not knowable or controllable. People should be grateful for whatever assistance that government can provide and had better do what they can to be responsible for their own fates.

That mature attitude seems to have largely vanished. Now we seem to expect perfection from government and then throw temper tantrums when it is not achieved. We seem to be in the position of young adolescents — who believe mommy and daddy can take care of everything, and then grow angry and cynical when it becomes clear they can’t.

After Sept. 11, we Americans indulged our faith in the god of technocracy. We expanded the country’s information-gathering capacities so that the National Security Agency alone now gathers four times more data each day than is contained in the Library of Congress.

We set up protocols to convert that information into a form that can be processed by computers and bureaucracies. We linked agencies and created new offices. We set up a centralized focal point, the National Counterterrorism Center.

All this money and technology seems to have reduced the risk of future attack. But, of course, the system is bound to fail sometimes. Reality is unpredictable, and no amount of computer technology is going to change that. Bureaucracies are always blind because they convert the rich flow of personalities and events into crude notations that can be filed and collated. Human institutions are always going to miss crucial clues because the information in the universe is infinite and events do not conform to algorithmic regularity.

Resilient societies have a level-headed understanding of the risks inherent in this kind of warfare.

But, of course, this is not how the country has reacted over the past week. There have been outraged calls for Secretary Janet Napolitano of the Department of Homeland Security to resign, as if changing the leader of the bureaucracy would fix the flaws inherent in the bureaucracy. There have been demands for systemic reform — for more protocols, more layers and more review systems.

Much of the criticism has been contemptuous and hysterical. Various experts have gathered bits of Umar Farouk Abdulmutallab’s biography. Since they can string the facts together to accurately predict the past, they thunder, the intelligence services should have been able to connect the dots to predict the future.

Dick Cheney argues that the error was caused by some ideological choice. Arlen Specter screams for more technology — full-body examining devices. “We thought that had been remedied,” said Senator Kit Bond, as if omniscience could be accomplished with legislation.

Many people seem to be in the middle of a religious crisis of faith. All the gods they believe in — technology, technocracy, centralized government control — have failed them in this instance.

In a mature nation, President Obama could go on TV and say, “Listen, we’re doing the best we can, but some terrorists are bound to get through.” But this is apparently a country that must be spoken to in childish ways. The original line out of the White House was that the system worked. Don’t worry, little Johnny.

When that didn’t work the official line went to the other extreme. “I consider that totally unacceptable,” Obama said. I’m really mad, Johnny. But don’t worry, I’ll make it all better.

Meanwhile, the Transportation Security Administration has to be seen doing something, so it added another layer to its stage play, “Security Theater” — more baggage regulations, more in-flight restrictions.

At some point, it’s worth pointing out that it wasn’t the centralized system that stopped terrorism in this instance. As with the shoe bomber, as with the plane that went down in Shanksville, Pa., it was decentralized citizen action. The plot was foiled by nonexpert civilians who had the advantage of the concrete information right in front of them — and the spirit to take the initiative.

For better or worse, over the past 50 years we have concentrated authority in centralized agencies and reduced the role of decentralized citizen action. We’ve done this in many spheres of life. Maybe that’s wise, maybe it’s not. But we shouldn’t imagine that these centralized institutions are going to work perfectly or even well most of the time. It would be nice if we reacted to their inevitable failures not with rabid denunciation and cynicism, but with a little resiliency, an awareness that human systems fail and bad things will happen and we don’t have to lose our heads every time they do.