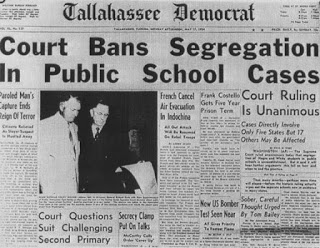 In 1954 the Supreme Court issued their decision on the case of Brown vs. the Board of Education of Topeka, KS, which outlawed school desegregation, effectively nullifying the 1896 Plessy vs. Ferguson decision that allowed for “separate but equal” treatment of whites and African-Americans in all aspects of life. In the years that followed the Civil Rights Movement in its many expressions from Martin Luther King, Jr.’s Southern Christian Leadership Conference to the Student Nonviolent Coordinating Committee (SNCC) to the Nation of Islam and Malcolm X in different ways sought to make that decision operative in the American South and North.  However, not until the 1964 Civil Rights Act were there any teeth in that decision.  Even then it took many years for school districts to begin to take seriously the need to provide equal education for all its students.
Despite all the sacrifices of those who gave their lives for the cause of racial justice, it appears we in Philadelphia find ourselves in a situation not unlike those pioneers of the 1950’s. Over the last three years the Philadelphia School District has lost $500 million in revenue from the Pennsylvania State Government. While $90 million has been restored this year, it is only a fraction of what is needed to provide basic service.*  On May 31 the Philadelphia School Reform Commission (SRC) passed a $2.4 billion dollar budget, which seems like a lot of money; but was $320 million short of what was needed. However, in passing the budget the superintendent acknowledged that the budget was inadequate to meet the districts needs and appealed to the city and state to contribute needed revenues while asking teachers to also take a cut in pay. Without extra help, all but principals and classroom teachers could lose their jobs in most public schools; that means schools will not have nurses, counselors, teachers aides, art & music teachers and administrative support services.(See link for details of Philadelphia School district decision.)
While these numbers seem staggering, another way to look at the issue is to look at what districts spend per student. In 2007 (the most recent figures I could find) Lower Merion, a wealthy suburb just outside the city limits, spent $21, 399 per student. Marple-Newtown, a middle class area spent $14,889 per student. Philadelphia spent $11,078 per student. (numbers from Inquirer School Report Card) This was before the massive cuts mentioned above. Now the reasons for the disparities are many, but the main reason is that public schools are largely funded by property taxes. Districts serving a higher percentage of low income residents, like Philadelphia, are dependent on the state government to fill in the gap. Add to that the proliferation of charter schools in Philadelphia which get money from district thereby draining off even more necessary resources. This is why the governor and state legislators’ callous disregard for the needs of low income students is so heinous.
The bottom line there is a “separate and not equal” policy regarding Pennsylvania public schools in which students are who disproportionately low income and persons of color receive basically half the resources expended on their education as their wealthy counterparts. Philadelphia is not alone, students with a high percentage of low income students both rural and urban face the same challenge across the state. Furthermore, Pennsylvania is not alone; school spending disparities exist in most major metropolitan areas.  Is this any different than the inequities which the Supreme Court outlawed nearly 60 years ago?
I think not.
Those of us who reside in the suburban areas ironically may have the opportunity to make a difference. I believe and hope that there are many people living outside the city (yet who routinely use the city services and enjoy the city’s benefits) who would be horrified to learn that we have returned to the days of the Jim Crow South; only the injustice is no longer relegated to the South but exists in the Philadelphia metro area. We can urge our representatives that we don’t want to live in a state or a country that treats its most economically impoverished citizens as cast-offs. Public education is a social contract that should guarantee that every student regardless of race, class, gender or geographic location is entitled to a safe, well run, academically credible school. Many students in low income communities like Philadelphia have not been able to depend on that contract. The current disparity is systemic racism and class-ism at its worst, and is no better than the Jim Crow South at its worst. 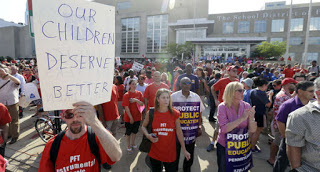 The other day a Philadelphia middle school teacher stood up in the church I attend and expressed his anger at the injustice befalling the students in his school. When I spoke with him afterwards, he said: Half the time I feel like I am in an insane asylum and the other half I feel like I am in a prison. That is what we are preparing these kids for, if we don’t provide a decent education.  People often wonder what it was like to live during the Civil Rights era. We are living in a new Civil Rights era. The challenge we face is whether we will respond with the same kind of determination that was exhibited by those who have gone before us.
* figures regarding school funding were provided by Senator Vincent Hughes of the Pennsylvania State Senate and can be found at http://senatorhughes.com/legislative-services/issues/education
* Pictures from Associated Press