Reflections from the U.S. Social Forum 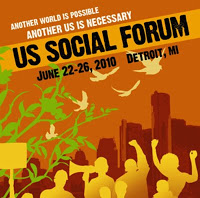 This past week (June 22-26) I was in Detroit, Michigan for the Second Unites States Social Forum (USSF). The first US Social Forum was held three years ago in Atlanta, as an outgrowth of the World Social Forum that began in Brazil in 2001. While estimates varied widely, there were somewhere between 15,000 and 20,000 people who converged on the Cobo Center in downtown Detroit for workshops, strategy meetings, dialogues and occasional protests.

According to the program booklet (p. 2) a social forum is “an open meeting place for reflective thinking, democratic debate of ideas, formulation of proposals, free exchange of experiences and interlinking for effective action, by groups and movements of civil society that are opposed to neoliberalism and the domination of the world by capital and any form of imperialism, and are committed to building a planetary society directed toward fruitful relationships among Humankind and between it and the Earth.”

That’s a mouthful, but basically it is a gathering of politically and socially progressive grass roots groups and organizers who have not generally benefited by the current social and economic order, and therefore are seeking to create a society that is more equitable, more humane, and more environmentally responsible. As such there were people and organizations representing causes such a public education, racial justice, mountaintop removal, gay & lesbian rights, trade unions, economic justice, climate change, and a whole lot more. As I kiddingly said to friends when they asked about USSF, we came together to plot the overthrow of the Empire.

This was my first time attending a social forum and as such I was taking it all in. What follows are a few impressions and reflections I took away from this amazing gathering of community organizers and social activists.

First, the USSF demonstrates that there is a massive movement of people who want a more equitable society and who operate from a variety of political and economic visions – Socialism, Communism, Anarchism, Solidary economics, modified capitalism, Buddhist economics and so on. While there was a significant minority of religiously oriented folks, by and large this vision is not informed by any sort of spiritual or faith perspective. Moreover, while the Tea Party folks, who represent the extreme conservative right, get a lot of media attention, this group represents the poor, the excluded, the forgotten and generally invisible in our society. While not widely publicized, this is a massive group of people to be reckoned with.

Second, I would estimate that 2/3 to ¾ of those gathered were under the age of 35 at least 50% were people of color: African Americans, Native Americans, Asians, various Hispanic groups and so on. There were also a predominance of poor and working class people and a great number of students. By and large the “leaders” ( I put this in quotes because by and large they were largely an anti-authoritarian group) were in their mid 30’s to early 40’s and brought with them a clarity of vision, a depth of experience and a deep respect for activists 50 and up who had gone before them. As opposed to my generation when they were in their 20’s (remember the phrase ”don’t trust anyone over 30”), these folks openly spoke of their debt to the activists of the 1950’s, 60’s and 70’s who went before them. The USSF is an intergenerational movement that sees that the struggle has been and will be over the long haul.

Third, while there was great deal of criticism of the current, social, political and economic order in the developed world, this is not just an “anti” movement (anti-war, anti-racism, anti-imperialism, anti-capitalism). The purpose of the USSF is to seek and provide solutions, to build alliances and coalitions, and to work together in a more coordinated way. I expect that there will be several efforts that come out of this gathering addressing a wide range of issues.

Fourth, at the USSF I heard a perspective on the current state of affairs that is rarely reflected in the mainstream media. In light of the economic recession, the current instability in the Middle East, the debate over immigration in the U.S., the current wars in Iraq and Afghanistan, and even the current disaster in the Gulf, it appears that global capitalism and the dominance of Western nations has peaked in terms of its dominance and is beginning to fall apart.

One striking example of the change taken was illustrated by a newly released Oliver Stone documentary, “South of the Border, ”which shows how over the last 10-15 years there has been a dramatic shift toward socialist leaning governments in Latin America (Venezuela, Argentina, Bolivia, and Brazil just to name four). These countries have rejected the past dominance of their political process and economies by Western governments and large corporations, and instead have sought to make reforms that are designed bring uplift to the poorest of the poor in those societies. This trend has caused U.S. officials to vilify leaders such as Hugo Chavez of Venezuela, when in fact he has been democratically elected and is widely popular in his own country because of the people oriented reforms he has made.

From the USSF perspective, one gets the sense that that tectonic plates of history are shifting and that we live in a window of opportunity for significant social and political change. It is more than a little symbolic, maybe even prophetic, that just days before the G-8 and G-20 nations were meeting in Toronto this weekend, there was a mild earthquake (5.0 on the Richter scale) in that city. Is God or the Creation trying to show us something?

Finally, while there was a small presence of religiously oriented groups a the USSF, I was struck by the overall absence of the Christian radical movement. Groups such as Sojourners, the new monasticism, and the emerging church were not evident ( the one group I did see represented was the progressive Jewish group Tikkun), despite the fact that many of the concerns discussed by such groups were very similar to things discussed at the USSF. As a Christian, I often felt like I was on the outside looking in. The language we socially oriented Christians use and the language dominant at the USSF don’t mesh easily. For example I attended a session on spirituality and economics, and it was clear that even though we freely talked about things we thought were wrong in the world, folks got very uncomfortable when the word “sin” was attached to such wrongs. So much what I saw being imagined and discussed would fit with my understanding of the Reign of God on earth, yet to use that language was difficult; apparently there is a lot of hurt and animosity from past religious baggage. I would hope there would be a stronger Christian presence in the future so as to connect our vision of God’s Shalom with the USSF vision of a more just world.

Overall, the USSF was an amazing experience; my cup was filled to overflowing, and I have been given a summer’s worth of ideas to ponder and digest. At times I felt overwhelmed by the magnitude of the event and often wondered why I was there, but it wasn’t because people excluded me in any way. I was just so humbled and awed by the amazing work that so many dedicated people are doing under oppressive and difficult conditions, and yet still remain hopeful for a future of peace, equity and justice.