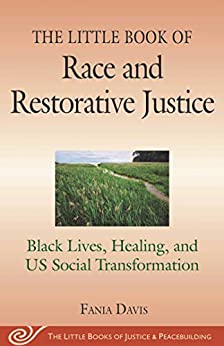 This past spring (2020) I had the opportunity to teach a course on Restorative Justice to undergraduate students. In preparation for the course, I read The Little Book of Race and Restorative Justice by Fania Davis. In the book Davis reports on her work in Oakland, California to use the principles and methods of restorative justice with issues of racial injustice in schools, the prison system, and with the police. She concludes by calling for Truth and Reconciliation Commissions in cities where police violence against people of color has occurred, contending that restorative justice is a way that reparations for racial harms done in the present and the past can be accomplished. She insists that we must be both warriors for racial justice and healers through restorative justice work. Warriors are those who use power with compassion to bring hope and strength to their justice work. Healers are those who bring health and comfort to those physically and psychically injured by the forces of oppression. I have been aware of the principles of restorative justice and participated in many classes and workshops, but Davis was the first author I encountered who applied them to issues of injustice in local communities and neighborhoods.

In the midst of my teaching the course, the COVID-19 pandemic came to the United States, and we had to finish our course online. At the same time the pandemic brought to the surface the inequities in healthcare, housing, and economic security that had always existed in our society but had been ignored; as people of color and poor people got sick in disproportionate numbers, while at the same time many of the “essential workers” in low paying service and retail jobs were forced to work. Economic and racial injustice was writ large across our society and could not be denied.

Then on May 25, George Floyd was killed and people flooded the streets in protest chanting “Black Lives Matter,” calling for the police forces to be defunded and their services transformed. In addition there were calls for fairness and equity in areas such as housing, access to healthcare, education, and job security. Institutions from the NBA to Nike began advocating for substantive change in our social and corporate institutions. More recently, these calls for change have reignited and intensified in the tragic shooting of Jacob Black by police in Kenosha, Wisconsin.

Meanwhile, in Philadelphia and cities across the nation have experienced a significant increase in gun violence in under-resourced neighborhoods. In Philadelphia already over 300 people have died and over 100 children have been shot, many simply being caught in the crossfire. Calls for “law and order” from the President may be mainly a campaign ploy but it also betrays a deep misunderstanding what lies behind the violence, which is poverty, the ready availability of illegally purchased guns,  and a feeling that many young people feel like they have nothing to live for. As the saying goes “hurt people hurt people;” the hurt is compounded as too many innocent and young people kill each other.

As I have watched this travesty of injustice and violence unfold, and as I have participated in demonstrations and calls for justice,  I have felt a growing conviction within me to deepen my understanding and facility with the tools of restorative justice. Police violence has not abated, anger fills the streets and turned to violence, families mourn the loss of loved ones taken too soon, and there needs to be healing and change in the way we treat the least of these. Under the leadership of Rev. Dr. Donna Jones, head of the Metropolitan Christian Council of Philadelphia (MCCP), there is a movement of people seeking to transform Philadelphia into a “restorative city” where restorative practices are used at all levels of our community life. It is a form of Fania Davis’s vision for Oakland brought to Philadelphia. I want to be part of that effort.

And so, I have decided to return to school to earn a Certificate of Restorative Justice from the Center for Justice and Peacebuilding in Harrisonburg, VA. Fortunately, I can take classes online and in concentrated summer sessions. So I can continue to contribute my efforts in the Kingsessing neighborhood and with POWER. At this point I don’t know where all of this will take me, but I have been following the Spirit’s leading all through the process.

As I return to the classroom, this time as a student, I want to share my journey on this blog. So from time to time when I am not speaking about issues near and far, I will share my learnings on this blog. As I begin I want to bring all my learning and experience to bear in this process. I hope to sharpen my skills and bring together the insights of community development, trauma-informed approaches, racial justice, anti-violence and restorative justice to bear in my work with people in urban communities and the city as a whole. I expect to learn from many people and hopefully along the way be a help to others.