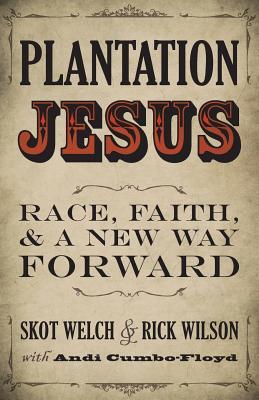 I was asked by Englewood Books, a Christian bookseller, to review the following book for them. Below is the substance of that review.

Skot Welch and Rick Wilson met in the late 1990’s when they were both members of a large Christian church in Grand Rapids, MI. They later joined another large church desiring to be “multi-ethnic” but was over 99% white. Under the leadership of a visionary pastor the church started on a path to become more authentically multi-ethnic. Skot and Rick were part of a group called “Mosaic” whose job it was to facilitate the church’s transition to this new multi-ethnic status. However, their efforts were quickly undermined by the overwhelming congregational resistance to the pastor’s multi-ethnic vision.  Despite this frustrating experience, Skot, who is black, and Rick, who was white (Rick died in 2014), created a radio show called Radio in Black and White, which addressed issues of racism, diversity and inclusion in society at large and the church in particular. This book is a result of that program and all that the authors learned in their dialogues and conversations with their guests, listeners and each other.

The first chapter begins by identifying the meaning of “Plantation Jesus,” the overriding concept throughout the book. Plantation Jesus is “a god who is comfortable with pain and suffering, an idol who can only exist in oppression and codified bigotry” (pp. 9-10). Plantation Jesus reflects a church that arises of out of the history of slavery, and racial oppression, and refuses to face the effects and implications of that history on its current life. Instead these churches insist that racism and bigotry are a thing of the past and not a concern of the present. Explicitly, “Plantation Jesus is the god of white supremacy: the system that undergirds the belief that white people are more valuable than others,” (p. 17) and is still implicitly and explicitly at large in many Christian churches today.

In chapter 2, the authors identify ten roadblocks to real conversation in U.S. society today. These roadblocks often lead to hostility toward those who would raise issues of race and often are met with an uncomfortable silence. This observation reminds one of Dr. Martin Luther King’s condemnation of the “white moderate” in his “Letter from a Birmingham Jail,” those who say they care about justice but fail to speak or act.  The roadblocks listed are common responses one gets when they seek to start a conversation about race, such as “Race has nothing to do with me,” “I never owned a slave” and “I don’t see color, only people.” For each of these and the other seven roadblocks, the authors offer brief but pointed rejoinders that reveal the fallacy of any attempt to avoid responsibility for the continuing racism in U.S. society.

Chapters 3 and 4 address the Eurocentric readings of the Bible that present many Christians with highly racialized, white interpretations of the Scripture. The third chapter takes up the racial/ethnic nature of Jesus himself, “a typical Galilean Semite” (p. 63), a dark-skinned Afro- Arabic Jew who looks nothing like the blond white figure depicted in most pictures and movies about Jesus. How we “see” Jesus is important because a “white Jesus” implicitly legitimates the notion of white superiority in relation to persons of color. The fourth chapter continues this theme by addressing the misreading of key Scriptural passages that have historically been used justify and neutralize any meaningful discussion of race in many Christian circles. They take up passages, such as Ephesians 6.5 and I Peter 2.18 that seem support slavery. They address the misuse of passages like Genesis 9.20-27 (“the curse of Ham”) and Genesis 4.11-16 (“the mark of Cain”), which were used to support slavery and racial segregation well into the 20th century. As an alternative the authors challenge the reader to “read the Bible through the lens of Jesus’ life, teachings, death, and resurrection” (p. 80), and to ask if such racist interpretations align with way Jesus dealt with people of different ethnicities and backgrounds.

Chapters 5, 6, and 7 deal with the institutional manifestations of white supremacy in terms of social power, civil religion and economics.  After defining their understanding of white privilege – “the advantages enjoyed by white people that are unavailable to nonwhite people” – the authors go on to discuss white supremacy – “the system behind the privilege” (pp. 87, 88). They highlight social policies such as redlining, mass incarceration, and residential segregation. They deconstruct the popular image of Thomas Jefferson as a benevolent master and describe him as a “very broken, very racist man” (p. 92).  They debunk the myth of American meritocracy and call for Christians to address the racism in their own lives and social circles. They further debunk the notion that the U.S. is a “Christian nation” and illustrate how in some of the most religiously committed areas of the country racial discrimination and hatred have not only been allowed but encouraged. They challenge the family values orientation and fervent patriotism of many conservative evangelical congregations, suggesting that often these values are a form of racial exclusion. In terms of economics, the authors show how in the past through slavery and peonage people of color were regarded not as human beings but as property and how even today “plantation economics” is a means by which college athletes and prison inmates are exploited for material gain.

In chapter 8, referring to Dr. King’s 1967 speech “Where Do We go From Here?”, the authors implore their readers with these words: “Sisters and brothers, we as churches have to accept the challenge of confronting and overturning racial injustice” (p. 147). They then offer several examples of churches across the country that are seeking to become racially inclusive and deliberately anti-racist in their programming, worship, staffing, and community outreach. This chapter is then followed by an appendix filled with various resources and exercises designed to help a group begin a meaningful conversation about racism and the disparities it continues to create.

The target audience for Plantation Jesus seems to be the concerned white layperson in the local church. While it draws on recent research on topics such as mass incarceration and Critical Race Theory, it is not primarily designed for an academic audience. Likewise, while it draws on theological resources, most pastors would not find the Biblical and theological depth somewhat lacking. While the book deals with race in its many forms, most of the examples seem to be directed at white folks, rather than people of color. However, for the average white person, this would be an excellent book for a small group discussion, Sunday School, youth groups and special retreats. Many of the assertions made about U.S. history, the manner in which whites tend to avoid the topic of race, and the subtle and overt ways racism is expressed, will be challenging enough for the average white person. The authors are to be commended for providing a valuable resource for white Christians willing to move out of their comfortable ignorance, face painful facts, reject the racist expressions in the evangelical church, and commit themselves to work for a more equitable and racially just society.