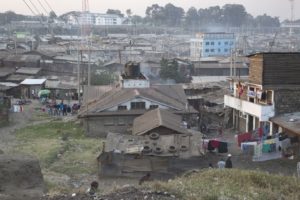 NOTE: From July 31 to August 15,  I traveled with seven other folks to Kenya as part of a project sponsored by Eastern University Urban Studies Program and  BuildaBridge International in cooperation with the Center for Transforming Mission based in Nairobi, Kenya. While on this trip I kept a journal of observations and reflections. Over the next several days I will be posting those reflections of this trip. All pictures are taken by Nathan Corbitt, Gene Ann Behrens and/or Drick Boyd

On Sunday, August 7 as a group we attended worship at Inspiration Centre, a church located in the Mathare slum northeast of downtown Nairobi. Mathare is the oldest slum in Nairobi and home to an estimated 5-600,000 people who live in huts of mud, wood and tin; approximately 70,000 of those living in Mathare are children. According to one source one out of every three adults have HIV/AIDs in Mathare; this eventually leads to older children becoming the caretakers for the younger ones when their parents get sick or die. In Kenya as a whole, over 60% of the population is under 24 years of age; in Mathare, I suspect the percentage is even higher. The Mathare River runs through the community, and is the receptacle of all sorts of human waste and pollution.  In recent years public officials have taken states to improve the quality of life in Mathare, but there is still much to do to make the area healthy and permanently habitable. 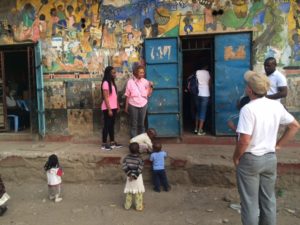 Given this description, one might not expect to experience a spirit of joy and celebration in such a place, but when we walked into the Inspiration Centre that Sunday morning, we experienced an emotional and spiritual uplift to rival the most prestigious mega-church. Inspiration Centre is where Jaime and Moses, our hosts, lead a congregation. Their ministry includes the usual Bible study, youth program and worship, but they also have a barber shop and other businesses that generate income. They have a savings club where people learn to save money, if only one or two shillings a week. They run the Flatted Fifth, which serves not only as a guest house for visitors like us, but also is home to about 6-7 young girls seeking a way out of prostitution and some families as well. The focus of their ministry is to build sustainability as they work for transformation in people’s lives and the community as a whole.

The church “building” is rather modest structure with a few small rooms for meetings, Bible Studies and a small office. Because the congregation is over a hundred people, a huge tent is set up with chairs, and the service is held outdoors under the tent. Up front a sound system was set up, complete with microphones and an electric piano. There was also a drum set. 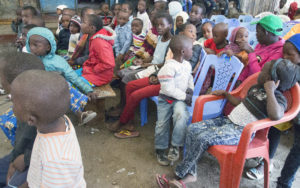 When we arrived, I was first struck by 4-5 rows up front filled with children. While they had the normal exuberance of children 5-10 years old, they were remarkably orderly and when the service started they were focused and participative. One could tell easily that these children knew that this was THEIR church as much as anyone else. Behind the children were several rows for adults and teenagers, not to mention folks standing on the sides of the tent peering in.

Anna, one of the young women providing us meals and washing our clothes at the Flatted Fifth, rode with us in the car to the service. She was very shy and quiet when around us. However, when the service started, she was in the front with the worship team leading the singing, and this absolutely beautiful voice opened up and led us in song after song for over 30 minutes. The children in front of us sang along and directly in front of me was a boy of about 10 who was intently worshipping. The singing was partly in English and partly in Swahili, but the spirit of the songs was obvious whatever the language. Here were people most of whom living in the Mathare Valley, yet praising God and thanking God, as if they had all they needed in the world. Gustavo Gutierrez, the liberation theologian from Peru, says we meet Christ in the lives of the poor. I felt the presence of God in that service like I have not felt in a long time. I don’t often find myself moved to tears in worship, but I came close to it that day.

Following the singing a young man of about 19 led the congregation in a time of sharing and announcements. Sanovia, one of the students in our group, led the group in a song, and along with two o 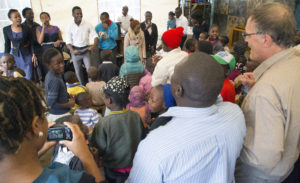 thers led the congregation in “I Love You, Lord.” Our group were invited forward to introduce ourselves, and we all said a word or two.

Then Moses delivered a simple sermon based on Mark 8. 22-26 on not allowing failure, disappointments, or mistakes to discourage one from trying; he stressed that Gods’ grace allows us to start again. Implicitly he critiqued the “Prosperity Gospel” which says that failure, poverty and any kind of imperfection is a sign one is not following God’s law. Instead he stressed that God is focused on grace. Later I talked with Moses and he confirmed my suspicion that like Gutierrez he sees God at work in his people and his community, and wants to affirm that. He sees the “prosperity gospel” as harming and discouraging people, while making a few preachers very rich by getting guilt money from their congregations hoping to earn God’s blessing thru their “good works.” 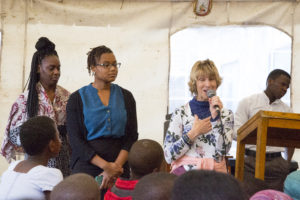 I was then invited forward to close the service with a prayer and to pray a blessing on the food that was going to be provided following the service. All the children washed their hands and then got a simple meal of beans and rice. Everyone was invited to share the meal. I and the others of our group stood around talking with people who came up to us such as: a man who had just resigned from the Kenyan Armed Forces and wants to study conflict resolution in the US, so to work for peace in Kenya; an architect who happened to be the husband of one of our drivers, Sarah; a young woman who had just earned a degree in Finance from Nairobi University and was so excited to talk to a university professor. This young woman and I had a lively conversation and she was obviously a bright and motivated young woman who wanted ultimately do something in economic development. 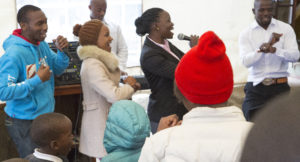 Later, I had a chance to talk with Moses on his theology and philosophy of leadership. He had just returned from being a way for eight weeks, visiting supporting churches and also having some time with family in the US and Honduras (on his wife’s side). However, while he was gone all the ministries kept moving along because he has trained and equipped all the young leaders in the church. While there were a few leaders who might be in their 40’s, most were under 30. What I felt and saw was the result of a servant leader approach wherein Moses was serving people in such a way that they too would become servant leaders. While Moses had never heard of Robert Greenleaf, he was embodying in so many ways the principles of servant leadership that made Greenleaf famous. (Just another example where the West gets credit for something that preceded them but was not known).

As we moved to our van to return to the Flatted Fifth, I felt like I had been invited into a special view of a ministry making a marked difference in a community. From the outside, the building seems to be falling down, the neighborhood desperate, and the people beyond hope. However, Inspiration Centre is aptly named, not only for those who attend week after week, but also for those of us who were able to visit. 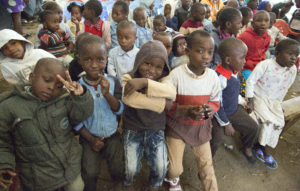