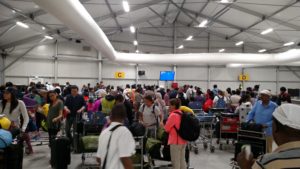 Going thru customs at the airport

One of the things I noticed a lot while Kenya was the way white privilege was manifested in that independent African country. When we arrived in Jomo Kenyatta airport in Nairobi, I noticed that Africans, Asians and others had to open their bags to get through the airport security, whereas we white folks were whisked through. When we went through security whether at a shopping mall or a store, it seemed fairly consistent that those of us who are white in our group were given only a cursory glance and told “Welcome to Kenya;” one guard even said “Welcome back” to me though we had never met (I guess all us white guys look alike J!). When Vivian, an African-American on our team, went to exchange dollars for shillings, she had to show her passport and identification, whereas I handed my American money over and got the corresponding Kenyan shillings in less than 30 seconds. It went so fast, I had to ask “Is that it?” When Vivian and I compared notes, it was clear again I was given a pass where she was not.

Yet beyond the concrete, there was just a sense that throughout our time in Nairobi, working and meeting with teachers, children, pastors and community workers, we were catered to at every point. To a point one might just chalk it up to good hospitality and customer service, because our group was equally black and white. Nathan, our trip leader, reminded us that as far as Kenyans are concerned we were children and the Kenyans were leading us around, protecting us, providing for us like we were children. So perhaps that was some of it. But as I looked at the bill boards and look at images on the news, I was struck by the Western influence. On the way to the school we were working, we would pass a huge sign with a picture of Steven Covey (author of Seven Habits for Highly Effective People) proclaiming him as “the most trustworthy man in the world.” Really? In Kenya? 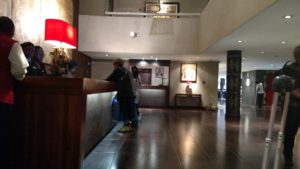 For the last three days of time in Kenya we moved from the Flatted Fifth to a five-star hotel on the edge of the Nairobi Game Park. The very fact we were able to move was an expression of our privilege, but then when we arrived at the hotel we saw an entirely different side of Nairobi. While in Huruma we were the only foreigners in the community, but at the hotel most were foreigners and at least half were white. There again our whiteness, our perceived wealth and our American-ness, led us to be catered to hand and foot; it actually got embarrassing! Later, we were taken to see the animals in the game park and there too we saw the “tourist class” who had come to Nairobi for the sights. As I said to one of our party, had we come to Nairobi and stayed only at the hotel, we would be leaving Kenya with an entirely different perspective.

Now had these sort of things occurred once or twice, I might not have noticed, but it seemed like everyday something came across my path that reminded me that I was regarded, respected and treated differently because of my whiteness, and my American-ness. At one point, Nathan asked me if I felt guilty about that, and I replied “I always feel guilty.” However, guilt is not the issue, nor even the effort to try to counteract the privilege that is granted me. Rather, on this trip it was to simply notice the deference I received because I am perceived, and wonder “why?” 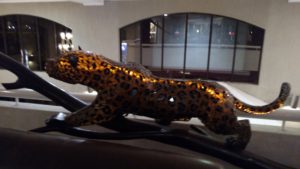 The reality of privilege hit me in an unmistakable way a couple days after arriving back in the U.S. I heard a news report of an outbreak of yellow fever in Uganda and the Democratic Republic of Congo. The outbreak is so vast and the available vaccine so limited that officials estimate they will only be able to give people one-fifth of the required vaccination, which at best will keep them immune for a year. By contrast in preparation for the trip I paid $160 for a full yellow fever vaccine and I wasn’t even going to a yellow fever infected area. Here I got the full vaccine which should last me for life, and have the choice of whether or not to go into an area where there is an epidemic. By contrast the people of Uganda and Congo, have no choice and are left extremely vulnerable to the disease and possible death.

There are many remaining vestiges of the British colonial legacy in Kenya, including the style of government, education system (which is currently under great criticism), cash crops chewing up forest land, and of course the English language. Yet there is also a seeming apparent pride in Kenya as well. Swahili is spoken freely between Kenyans, and it seemed that English was only spoken for our benefit. Leaders like Nobel Prize winner Wangari Matthai led a land reform movement that continues to this day. I heard much talk on the news and in conversation about recovering the African-ness of Kenya. So things are moving to a more authentic and Kenyan style of life. 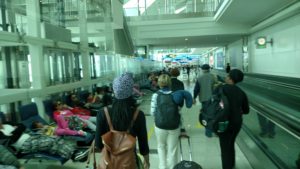 Passing thru the airport

At the same time, I talked with another pastor here, who really wants his work to be self-sustaining and self-supporting, even though he appreciates the support from American sources he receives. So it is a dilemma; by providing financial support, various services, even trainings like our own, we unintentionally perpetuate a myth of White Western superiority. Yet my experience over our two weeks in Kenya has been much the opposite; when it comes to resilience, perseverance, making do with less than adequate resources, and doing all of this with a positive attitude, we who are white and/or American have much to learn from the Kenyans. For this reason, the evidence of white privilege is not just disturbing, it distorts the reality of what we need to learn from the Global South