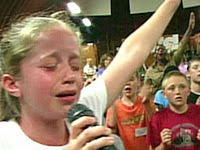 Recently, at the urging of my daughter I watched the movie Jesus Camp, a 2006 documentary film which follows the lives of several children in fundamentalist, Pentecostal families, and a charismatic children’s pastor named Becky Fisher. The film takes its name from a summer camp for children and their parents that pastor Fisher runs, at which she evangelizes and challenges children from ages about 6-12 to be the generation that brings the United States back to God. The film follows these folks from the summer of 2005 to the January 2006 against the backdrop of President George W. Bush’s appointment of Samuel Alito to the Supreme Court seat vacated by Sandra Day O’Connor. While the directors claim that they are not evangelical Christians, they seem to portray the main characters of the film (mostly children and Pastor Fisher) in a fair and favorable light. If the film had an agenda other than to inform, that agenda was not obvious.

As I viewed the film I found many aspects of it very familiar from my involvement and contact with evangelical and fundamentalist Christianity. For instance, the program and dynamics of the summer camp was similar to most Bible camps I have seen, and even the Young Life camps that I helped run in my 20’s. The peer pressure, the intense love for the kids, lots of fun activities, and a clear and simple gospel message portrayed in the film is a powerful formula used by many successful children and youth ministries. While on one hand the leaders of the camp claimed not to have a political agenda (meaning partisan political agenda), there was a clear and open purpose to instill Judeo-Christian values back into government particularly on issues such as homosexuality, abortion and the adoption of creation science curriculums in schools. At one point in the film, the children even prayed over a life size cutout of Pres. Bush, who was seen as the political savior and champion bringing America back to God. I must admit I can’t imagine the camp prayed over an Obama cut out last summer.

In part what was troubling about the film was the co-opting of the word “evangelical” by both the participants and the film makers. The word “evangelical” means “bringer of good news” but in the film the emphasis on bringing government back to God and human sin in all aspects of life seemed heavy and guilt-ridden. In many people’s minds today, the words “fundamentalist” and “evangelical” are synonymous, and yet the modern evangelical movement actually split off from fundamentalism in the 1940’s because of fundamentalism’s unwillingness to meaningfully engage the culture. Early evangelical leaders such as Carl H. Henry and Harold Ockenga sought to bring a balance between clear Christian principles with a meaningful interaction with current social and political issues. However in the 1980’s the rise of the so-called “Christian Right” made “evangelical” a political term often linked with extremely conservative Republican political views especially on homosexuality, abortion, the military, and a reduced welfare state. Today too many so-called evangelicals seem to want to create their own world complete with their own schools, own businesses and now their own form of government. Even the National Association of Evangelicals seems to have embraced this agenda, so that fundamentalist and evangelical for many are inter-changeable. For that reason many years I gave up calling myself evangelical.

The views expressed regarding the Christianizing of government reminded me of the writings of Rousas John Rushdoony, a Calvinist philosopher who is considered the author of the Christian Reconstruction movement. While Rushdoony died in 2001, his message has been most forcefully carried on by TV evangelist Pat Robertson and radio host James Dobson. Rushdoony believed in theonomy, which basically states that Christians should take over the government and institute a governmental system based on the principles of Old Testament and New Testament law. Christian Reconstructionists do not believe in the separation of church and state, but rather work to establish God’s Kingdom on earth in anticipation of Christ’s Second Coming. In their world, homosexuality and abortion would be criminalized, and the welfare system would be dismantled.

The Tea Party movement seems to have largely tapped into this movement, although it would be unclear if all so called Tea Party-ers would fit with their views. A libertarian like Kentucky Senate candidate Rand Paul would not seem to fit with an idea of a Christian “takeover” of government, but Sarah Palin might. Though Christian Reconstructionists believe in “less government” they would overhaul government as much as they accuse Obama of doing, only in a way that fits their view of the world.

The Christian Right movement portrayed in this film is powerful because it touches on some of the basic values of family and community, but it does so in a polarizing, exclusive and uncompromising way. Its simple “us vs. them” view of the world is both the source of its power and its destructiveness. At the same time while claiming to “counter-cultural” there is an unquestioned allegiance to American style individualism, militarism and capitalism. Like their Puritan forbears these folks seem American as “God’s nation, and they are bound and determined to “bring it back” to that perspective.

The film was produced in 2006 and one wonders what has happened to those kids in the last four years, who today would be in their early to mid teens, and what will happen in the next few years. Will they go the way of Robert Wright, author of the Evolution of God, who grew up in such a home and now considers himself an agnostic? Will they go the way of Shane Claiborne, who also grew up in that environment, but now is a radical Christian anarchist? Will they become like an Andy Stanley, a son of Southern Baptist preacher, who himself is now a Southern Baptist preacher? Or will they be like my former Duke professor who totally renounced his faith after hearing hellfire sermons in his youth but who could not bear the thought of being in heaven while watching his non-believing friends burn in hell? Will they adopt the faith of their elders as Pastor Fisher hopes, or will they be like so many fundamentalist children turned adults who spend years seeking to undo the rigidity, shame and guilt of their fundamentalist background?

One thing the movie makes clear is that the Christian Right has a clear and well crafted message that has been adopted and is being promoted by millions of people in this country. While I don’t subscribe to their brand of Christian faith, I have encountered it enough to realize that the “simple gospel message” has a powerful appeal to many because it helps people make sense of a complex and frightening world. My Christian faith is far more focused on social justice, dialogue, meaningful engagement with the world and inclusiveness, and combating the evils of racism, militarism and economic elitism in our culture. Like the Christian Right, I see our culture in dramatic need of renewal. However, the changes we respectively seek are dramatically and diametrically different. The fact that we both claim to follow the same Jesus makes me wonder if just like the word “evangelical” the word “Christian” has begun to take on an implication I can no longer abide.