In Memory of bell hooks 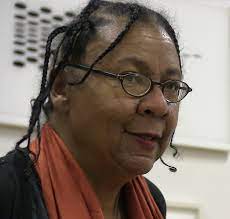 Gloria Watkins, better known as bell hooks, died today (December 15, 2021). She was 69 years old and had been suffering from a chronic illness. She was an author, social critic, teacher, and prophetic voice. Whenever I read her writings, of which there are many, I always felt I was listening to the voice of an “old soul,” a woman whose wisdom plumbed the depth of life as we know it. Thus, imagine my surprise when recently I realized she was only one year older than me. We grew up in the same time in history yet in dramatically different circumstances: she in the segregated South, I in the frigid north of Minnesota; she in poverty and abuse, I in a large family with more resources than we knew what to do with, she in a patriarchal setting that did not affirm her gifts, I as a privilege white male.

And yet somehow, I found her in our mutual love and admiration for the Brazilian educator Paulo Freire. She met Freire when she was a student at Stanford, one of only a few women of color in that prestigious institution, and was immediately inspired by him. In her book Teaching to Transgress, she writes, “Paulo was one of those thinkers whose work gave me language. He made me think deeply point of identity and resistance as I did through his language of hope and vision for the future. And yet bell hooks helped me see the relevance of Freire’s work for addressing injustice in the here and now.

A few years ago, I was invited to teach a graduate course on pedagogy and included her book Teaching Critical Thinking: Practical Wisdom in the readings for the course. Without a clear objective, I simply wanted to introduce my students to this brilliant thinker and teacher of teachers. In the first chapter of the book she writes, “Thinking is action…The heartbeat of critical thinking is the longing to know —to understand how life works” (p. 7). Like for Freire, for hooks thinking and action were not opposites but integral parts of each other. We learn as we experience and analyze life experiences and then reflect more deeply on the insight and knowledge we have. For hooks that thinking included the lenses of feminism, anti-racism, and a deep concern for the marginalized. It included not only the expanding of one’s mind but also the development of one’s emotional intelligence, social consciousness, political awareness, and an active engagement with the injustices and suffering of the world. Like Freire, she did not see knowledge as neutral but politically charged, either serving the powerful elite or the liberation of the oppressed. She believed every learner has inherent wisdom and untapped potential, and the role of the teacher is to liberate those hidden gems of wisdom. She believed that engaged teaching was an essential work of justice. These are only some of the lessons I gleaned from her numerous writings, which informed the way I approach my task as a college professor.

It is odd that this upper-middle-class white kid from Minnesota would find such a mentor in the short Black woman from the rural South, but I did and I am better for it. I always wished I could have met her personally, and once even proposed we bring her to speak in Philadelphia, but that did not happen. My guess is that had she come, she would have given me only passing notice because her passion was to encourage and lift up students of color, particularly women of color…. And that would be okay. Little did she know she was able to touch this white guy with her words, passions, and example and will continue to do so for years to come.