Immigration Reform and the Border Surge – A Waste and an Embarrassment 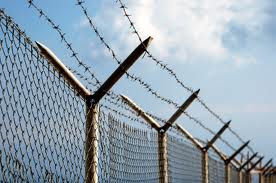 Robert Frost begins his famous poem “Mending Wall” with the words “Something there is that doesn’t love a wall.” As members of Congress seem to be heading toward an agreement on immigration reform, one of the provisions that will likely be included in the bill will be what AP journalist David Espo and Erica Werner call a “Military style border surge” to “secure the Mexican border.” More specifically the bill would double the number of border agents from its current 20,000 to 40,000, add 18 more surveillance drones and 350 more miles of fence. One would think with such an increase in the Border Patrol, already the nation’s largest police force, we were being overrun by the barbarians of Roman times. In essence, the idea is that the estimated 11 million people in the U.S. without documentation would be given a “path to citizenship” but no more would be let in. However even the non-partisan Congressional Budget Office predicted such an effort would fail to achieve this objective.(For the Espo/Werner article, click here). 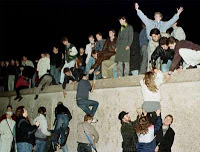 I find the whole discussion about building a better wall to be an embarrassment as an American citizen. For the first 36 years of my life, I lived in a world dominated by the Cold War in which the entire globe was divided between those favorable to the United States versus those nations favorable to the Soviet Union. We lived in a constant awareness that at any moment we could be vaporized by a nuclear missile ignited when the “cold” war went hot. The premier symbol of this divide was the Berlin Wall, and the accompanying fence that ran between East and West Germany.  However in 1989 President Reagan proclaimed “ Mr. Gorbachev, tear down this wall!” and through intense negotiations relationships between the two countries improved and the Berlin Wall came down in dramatic fashion, allowing East and West Germans to pass freely from one side to the other and eventually reuniting that country which had been divided for over 40 years.
After that I thought we might be done with walls; but then Israel built its wall to separate the Jews from the Palestinians, and now we have been building our wall with Mexico supposedly to protect us from terrorists and unwanted immigrants. But as Reese Jones from NACLA (North American Congress on Latin America) points out, the wall is only partially about security; it’s really about protecting our wealth and preserving our culture from unwanted (read non-white) influences. *

What is so tragic about this rationale is not only its short sightedness, but also that it completely ignores the huge disparities between those who live north of the border  and those who live south, and the role of the United States has had in promoting and preserving that disparity. To understand the U.S. role one must go all the way back to the 1850’s when U.S. leaders began talking about “Manifest Destiny” which essentially stated that the U.S. would choose to shape the world to its own image. This helped to strengthen the 1823 Monroe Doctrine established during the presidency of James Monroe that European countries could not engage in trade or aggression in North, Central or South America without facing military aggression. In essence the U.S. said Latin America is ours to mess with and no one else.
And mess we did: from propping up military dictatorships, to grabbing and defending huge tracts of land to enabling U.S. companies to exploit resources from fruit, to oil to precious metals. In the 1980’s the CIA worked with dictators in countries like Guatemala, Honduras and Nicaragua to suppress populist movements seeking to reform and regain control of their countries. In the 1990’s the U.S. passed NAFTA (North American Free Trade Act) which allowed U.S. companies to relocate to countries like Mexico with lower labor costs and less stringent safety and environmental standards. However, while companies could move freely laborers could not. What these 11 million undocumented folks represent are mostly people seeking to find work to support their families living in countries devastated by over a century of U.S. exploitation.
So not only is the wall an embarrassment, it represents a complete denial of U.S. responsibility and accountability for the situation we currently find ourselves in.  Several studies have found that if given the chance to travel freely between their home country and the United States, most Latin American immigrants would do so. They come here looking for work so they can provide for their families and then return home.  The sheer persistence of those who seek to come to the United States for these purposes make the so-called border surge a joke and a waste of money.
What if instead of spending billions of dollars on border patrols and a border fence ($4.7 billion was spent between 2007 and 2011*), we invested in teachers, new schools, health care workers, and quality housing for all? What if instead of billions of dollars on running undocumented immigrants through the criminal justice system ($5.5 billion in 2007 alone*), we invested in youth programs, college loan programs, and disease prevention? Not only would we be able to serve the needs of U.S. citizens but all those who are here temporarily as well.
A couple weeks ago I traveled through the Southern United States visiting sites that were prominent during the Civil Rights movement of the 1950’s and 1960’s. In the beginning the Civil Rights movement focused on breaking down the walls of segregation that sought to completely separate blacks and whites in all areas of life. I was amazed and appalled at the lengths to which white Southerners would go to maintain segregation often leading them to engage in violent acts that made them look barbaric and inhumane in the eyes of the world. 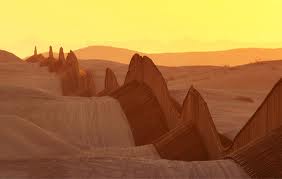 That’s what this border fence and the accompanying security force looks like. We even have our own version of the KKK; they are called “The Minuteman.” We look to be big bullies with our rifles, guns, drones and barbwire fence saying “No way can you play in our sandbox!” In the eyes of the world, we look to be arrogant, cold-hearted, violent and inhumane; and we are. Moreover, with time, like the walls of segregation, like the Berlin Wall, this wall will too come down, and we will be left to recover from being the sorry fools who allowed it to be built in the first place.
**these insights and figures are excerpted from Reece Jones’ book Border Walls (link here)
–