How The Poor Have Been Dropped from our Political Vocabulary 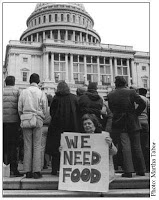 There was a time when politicians of both major parties talked about the poor. While they had different philosophies as to the causes of and solutions to poverty, they fell all over themselves and each other to convince the public that they cared about the needs of the most vulnerable and least resourced in our society. However, not long ago politicians changed their vernacular, and now nary a peep is heard about poverty or the needs of the poor in the political public square.

Through nearly two-thirds of his State of the Union address, Pres. Obama talked about economic issues, and never once did he mention poverty or the poor. He talked about banks, small businesses, homeowners, the unemployed, the middle class, and those making over $250,000 a year. Never once did he acknowledge that in the midst of this economic recession the gap between the haves and have-nots continues to grow, and that the so-called “middle class” is a shrinking phenomenon. If I was a single parent living on welfare, a homeless person, an unemployed young adult with no high school education, or a parent piecing together two or three jobs, and I was listening to that speech, I would not have found myself there at all. One oblique reference might have been the 30 million people without health insurance, but their needs are not the focus of the debate, but rather whether or not the President can get his coveted political victory or if the Republicans can stymie that attempt. If I was a poor person I would feel that I do not exist, at least as far as Congress, the President, and the media are concerned.

Now this is nothing new, candidate Obama rarely, if ever mentioned the poor, nor did candidates Clinton, McCain or the other presidential hopefuls. And certainly Pres George W. Bush did not mention the poor, or concern himself with the needs of the poor. Oh, we have banks that are too big to fail, large companies that need to be bailed out, and all sorts of homeowners facing foreclosure. But we rarely hear the “p” word; even when the “p” word is what is growing. To talk of poverty might spark “class warfare” and we in the US we don’t have a socioeconomic class system…..Ri-i-i-ght!

Add to that the recent decision of the Supreme Court to allow lobbying and special interest groups free rein to spend as much as they want to influence political campaigns. So these special interest groups can hold candidates hostage with promises of campaign money or the lack thereof, depending on how they vote. For all the talk about the Republicans being the stand ins for the health insurance industry, many of the key Democrats are also beholden to the health insurance, pharmaceutical and medical professional lobbying groups according campaign contribution watchdog Open Secrets.Org . So if I am a person without means, I have no voice. As former NY Times reporter Chris Hedges wrote recently “Democracy in America is a Useful Fiction.” Our government is not set up to respond to the needs of the people, but in all too many cases it is aligned to give itself to the highest bidder.

So sorry poor folks. You don’t count. Now if you have a crisis like Haiti, we might send you some supplies and people to help, but as the poor people of New Orleans found out, after the immediate crisis has passed, it is much more profitable and media-savvy to rebuild places like the Superdome and the downtown business area than it is to rebuild your homes in your neighborhoods that still lie devastated.

Jesus said, that that poor you will always have with you, not as an excuse to do nothing, but rather a reminder that the poor are part of society too, and their needs and aspirations count as much (or more) as the likes of Wall Street, Citibank and Goldman Sachs. In economic terms that means the recession is over when all are lifted from a life of survival and struggle. When CEOs are ashamed to be given huge bonuses while others suffer, and those who are most vulnerable and least resourced have their basic needs met, then the recession will be over. That is, when the poor are no longer ignored, then the recession can be announced as over.