Of all the holidays in the year – religious, patriotic and otherwise – Good Friday is the most meaningful for me. For the last several years, I have spent part of Good Friday in a vigil visiting sites where death by gun violence occurred, reading and reflecting on both the violent and tragic deaths due to gun violence and the suffering of Jesus.  However, at the last moment this year’s vigil was cancelled, and so I am choosing to spend that time with this reflection.

My special relationship with Good Friday began when I was a first year student at Duke University in the spring of 1972.  Having grown up in a community in which Good Friday meant a day off from school, I was at first surprised and disoriented that I had my regular Friday class schedule that day; there was nothing special about it.  Moreover, at the time I was taking a course on the New Testament in which the agnostic professor denied the historicity of the resurrection and proclaimed in his Scottish brogue that “the bones of Jesus are lying somewhere in the garbage heap of Jerusalem!”  So there I was in a place where not only was Good Friday not noted, but also its significance was denied.

After my New Testament class, I went to the Duke Chapel (which wrongly named, was really a cathedral) where I sat in a pew for quite a while thinking about the death of Jesus and the meaning of the day.  Having its significance blatantly denied caused me to reflect on its meaning for me. While there I began to write the words to a bluesy-rock-type song with these words

On this day, they tried to kill my Lord

On this day they tried to kill my Lord

They put him on a wooden cross,

But he came back to show who’s boss.

Now they know they can’t kill my Lord.

Now while the words were not all that profound (Jesus as “boss?”) and it was the beginning of a short song writing career, those words captured for me the significance of the death of Jesus. For me that significance was largely caught up in the traditional Christian understanding of the death of Jesus as a sacrifice for the sins of people, and that in believing on his death, one could be “saved from their sins.” Another verse said that specifically:

Jesus died to set us free

He took away my sins from me

My Lord has already saved the world.

Again the lyrics are tacky and the theology simplistic, but it very much reflected where I was as an 18 year old college student.

These days, I don’t find much inner traction with the idea of Jesus dying for my or anyone else’s sins.  The concept of sacrifice, very real in the Judaism of Jesus’ day, had profound meaning for his Jewish followers. Here Jesus was taking the place of the sacrificial Passover lamb, becoming the scapegoat on whom all sin and eternal suffering were placed.  However, the meaning of sacrifice, blood and all that just goes by me.  It reminds of a story I heard (perhaps apocryphal) of a man unschooled in the language of Christians, walking into a church and being horrified hearing people being “washed in the blood of Jesus.”  No, blood and sacrifice and some sort of magical but invisible transformation from sinner to saved, just doesn’t get it for me.  It works for many, but not me.

As it turns out over the centuries Christians have grappled mightily from their own cultural and intellectual contexts to come to terms with this event we call the death of Jesus. Over the centuries the death of Jesus has been proposed as a ransom, a debt payment, a judicial reprieve and a cosmic victory over Satan and the forces of darkness. None of those views have actually made sense to me either.  I need something more concrete.

Some years ago I came across a book entitled The Many-Sided Cross in which the author, Alan Walker writes: “No one can read the story of Jesus without being forced to conclude that he believed that by dying on the cross he was doing something which could not have been achieved by longer living.”… What was this ‘something’ that Jesus accomplished? To ask this question is to move to the central mystery of the many-sided cross of Jesus” (pp. 43,44).  Walker then goes on to explore the many different metaphors and symbols that have been and could be used to explain just what the cross of Jesus was about.

Near the end of the book, he discusses the understanding that these days makes the most sense to me: the cross of identification.  Walker explains that there are two crosses that “stand upon the pages of the New Testament and in Christian history” (p. 89). The first cross is the place where Jesus died; the second cross is the cross of identification in which we seek to follow the example of Jesus.  First, we are to see in the sacrificial life and death of Jesus, an example for how our lives are to be led. However, this sacrifice is not an arbitrary embrace of suffering for the sake of suffering, but suffering and sacrifice on behalf of others.  Moreover, it is a call to recognize the plight of millions of people around the world who suffer daily just to survive: for the Syrian refugees, the victims of Boko Haram, the poor on the streets of Calcutta and Philadelphia, those imprisoned and much more. Finally, we are to live in solidarity, to become allies and fellow sufferers, to (in the words of the apostle Paul) “empty ourselves” for others, to enter other’s suffering and struggle with them for liberation, ours and theirs, from the forces of oppression that divide and destroy us.

Walker critiques the royal images of Jesus as Lord and Prince, and even more so those religious traditions where church leaders adorn themselves in royal robes. He challenges those alliances of the Church with state and political power and the identification of “Christian” values with nationalistic hubris. It is because of these distortions of the meaning of Jesus’ sacrifice that I don’t attend a Good Friday service, but have chosen to walk city streets remembering victims of gun violence.  Good Friday is not about religious pomposity, but solidarity.

The final verse of my Duke Chapel song  goes like this:

They try to tell me that my Lord is dead

They try tell me that my Lord is dead

But I know that just can’t be

Because, you see, well, my Lord, he lives in me

My Lord’s quite alive and he ain’t dead.

May Good Friday carry for each of us a deep meaning, the likes of which, we will take a lifetime to pursue. And may we know we seek that life in community with each other and deep power of Christ within and among us. 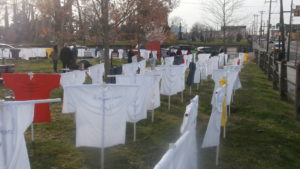