Diet for a Small Planet (Books That Shaped My Life #5) 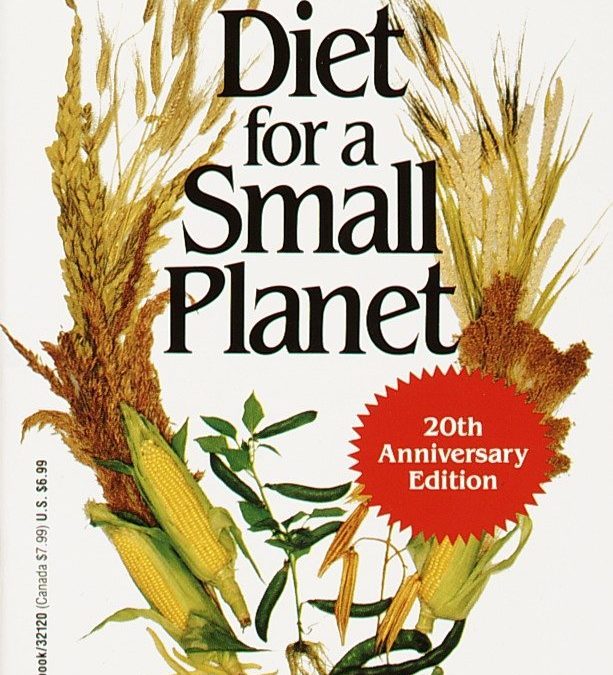 During the summer before my senior in college, I fell into a deep depression. A woman who I had been dating off and on for over seven years informed me she was engaged to someone else. I was so surprised and saddened by the news I stopped eating.  Though I was still working and active, I had no appetite. The only thing I would eat were salads.  In my family the center of every supper was some kind of meat – hamburgers, meat loaf, chicken, pork chops – but I would have none of it; I would only eat salads.

As it drew near the time for me to return for my last year of college, my mother was worried about me. My mother was a wise woman, and she knew that cajoling or pleading with me would not change my decision to not eat meat. So, instead of trying to force me back to eating meat, she gave me a book. She said, “If you decide you don’t want to eat meat, that’s fine. But you still need to get your protein, and this book will show you how to do that.” The book was Diet for a Small Planet by Frances Moore Lappe.  Today that book has sold tens of millions of copies and is vegetarian and simple living classic. But in 1974 it was relatively unknown. And while my mom’s reasons were simply a mother’s love and concern for her son’s health, she ended up giving me so much more

On the long drive from Minnesota back to North Carolina, I read the book and learned how by eating certain combinations of foods like legumes and rice, I could get adequate protein without need for meat.  I learned about dishes from countries like India, the Middle East, Mexico and Italy that were not only meat-free but absolutely delicious. I learned there were cultures all over the world, whose diet was largely meat-free. And I learned that there was all sort of delicious vegetables I never considered as excellent sources of energy and nutrients.

However, what most struck me was Lappe’s primary rationale for eating vegetables: the fact that by eating lower on the food chain we can significantly increase the food supply for the rest of the world. One of the more compelling statistics she cited was that it takes 16 pounds of grain and soybeans to produce one pound of beef.  The number is something like 10:1 for pork and 6:1 for chicken. In other words grains, land and water used to produce crops to feed animals who become our sources of meat can be used instead to grow healthy food for people by all of us eating lower on the food chain. The thought was so simple, and yet I and much of the Western world were blind to this simple idea. Since the book was first published, huge swaths of the Amazon forest have been cut down for cattle grazing land to meet the world’s hunger for beef, and has inadvertently contributed to global warming. Likewise, it has come to light that the animals raised to supply our meat fetish are subject to horribly cruel conditions and injected with hormones to fatten them up. These realities make Lappe’s message all the more urgent.

While I started on the vegetarian path by default, by the time I arrived at school I had become a convinced vegetarian. Moreover, I set myself to spread Lappe’s message about addressing world hunger by eating lower on the food chain and more generally calling attention to the effect our over-consumptive Western lifestyles have on the rest of the world. I had a friend who was chair of the University Religious Council and with the Council’s help we initiated a hunger awareness campaign encouraging students to give up one meal a week and to donate the funds to a world hunger fund. Near the end of the fall semester, we sponsored an all day fast in which several hundred people participated, and were able to send several hundred dollars to Oxfam America, a development and hunger relief organization. During the second semester we continued the one-meal-a-week campaign, and I became known as the anti-hunger guy on campus.

This was the first time in my life I had ever organized any kind of poverty awareness or social justice campaign, and it transformed my perspective. I realized that a group of people organized around a common cause could make an impact on others and make a change for good in the world. Now the amount of money we raised was nothing substantial and we certainly didn’t make a dent in world hunger. Also we were rightly criticized by skeptics who said we made ourselves feel good, without making a significant difference. However, for me it was the first step in a life of seeking to relieve the suffering and oppression of others in the world.  It started me on a process in of deepening commitment to work for peace and social justice that continues to this day.

For several years when I was a faculty member at Eastern University, I taught a course called “Justice in a Pluralistic Society.” The course was a basic introduction to the concepts of social justice where we looked at issues of poverty, immigration, racism and sexism in the U.S.  Because it was a required course, it was not a subject matter that most students had a great awareness or interest in. At the beginning of the semester, after introducing myself I told the students that my purpose was to mess up their lives, challenge their assumptions, and motivate them to become social justice activists.  While I said those things in a tongue-and cheek-way to get their attention, I was also serious. And every time I taught the course there were two or three students who got all fired up about social justice, and several of them have gone on to work in low income communities in the U.S. around the world. And for the others, my hope was to plant some seeds that at some point might start them on the same path I started on when my mother gave me Diet for a Small Planet.

I maintained a fairly strict vegetarian diet for about seven years, and even though I sometimes eat meat it is not an essential part of my diet. Moreover, I became committed to a simple lifestyle recognizing that how I live impacts the world around me. After college when I began cooking for myself, I first learned about cooking by making vegetarians meals. To this day I feel more confident making an eggplant parmesan or a spinach lasagna or a rice and bean dish, than I do a hamburger or a London broil.  And to think that it all started with a broken a heart and a little book called Diet for a Small Planet.

*** Frances Moore Lappe continues to be anti-hunger activist, a proponent of living democracy, and an environmentalist. She has written 19 books and currently heads The Small Planet Institute.