Could "Occupy Wall Street" Be a Sign of Things to Come? 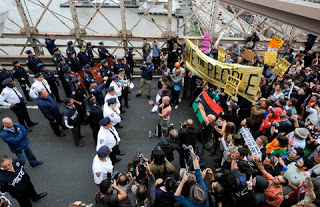 Early on Sunday morning, the New York Times reported that 700 protesters of the group “Occupy Wall Street” had been arrested attempting to cross the Brooklyn Bridge to Lower Manhattan where there have been a week of demonstrations in New York’s financial sector. While they characterize themselves as a “leaderless resistance movement with people of many colors, genders, and political persuasions;” they indicate “we are the 99%” referring to the 99% of Americans who have lost economic ground at the expense of the 1% of Americans (roughly those who earn $650,000 or more) who have gained significantly during the “great crash” of 2008. While the movement has been centered in New York, it has spread to to other cities like Chicago, Boston and Philadelphia.

Back in early March I went to Madison, WI and took part in the protests around the state capitol in response to Gov. Scott Walker’s desire to suspend all bargaining rights for unions employed by the state. 50,000 people from all walks of life peacefully stormed the capitol, even occupying the rotunda for several days. It was inspiring as I heard filmmaker Michael Moore(producer of the 2009 doumentary “Capitalism: A Love Story”). Moore had shown up unexpectedly and shared that from his perspective the budget problem in Madison, Washington and elsewhere was not a shortage probelm but a distribution problem. That’s the same issue in New York.

As I have added my voice (on this blog and elsewhere) to the rising chorus of protest of the suffering of the many at the neglect of the few, I have wondered when will people hit the streets in frustration and anger. The protests thus far have been nonviolent, but as I watched to video of the confrontation between police and protesters on the Brooklyn Bridge, I could see the possibility of violence erupting.

Celebrities like  actress Susan Sarandon and philosopher/social critic Cornel West have joined the protests, which has enabled it to get some press. The movement is still young and at least in Philadelphia still trying to get organized. I must say I don’t know how a “leaderless movement” sustains itself, but I share their convictions and concerns.

Scholars who study social movements, sense that like the Arab Spring in Tunisia, Egypt, Libya, Syria and Yemen, this is not a movement that will go away. Hopefully, it will not result in repressive violence we have seen in some places, but it has the feel of the Civil Rights and Vietnam War movements. The injustice has become increasingly clear, and the arrogance of those who would defend current financial policies has been palpable while unemployment continues to soar and even those who are employed continue to lose ground.

Last Sunday, I joined over 2000 people in Tindley Temple United Methodist Church, calling on city leaders to work decisively int eh creation of jobs for the thousands of unemployed and underemployed Philadelphians. We call ourselves POWER (Philadelphians Organized for Witness Empowerment and Rebuilding). Our gathering did not confront the police like Occupy Wall Street, but our sentiments are the same. We’ve had enough of the sell-outs, givebacks and lame excuses for cutting essential services while not raising taxes on the wealthy. We are tried of the political rhetoric from our elected officials and want some concerted actions. We will no longer let corporate leaders hid behind their lobbyists and PAC money; they too must be held accountable.

I only hope and pray that this movement will grow and be a sign of things to come whereby the powerbrokers and dealmakers in state capitols like  Madison and Harrisburg, inWashington, on Wall Street and in corporate boardrooms around the country will begin to recognize that while we 99% allowed this charade go on for too long, now their time of reckoning has come.