I write this on my last night of two weeks (Aug 1-14) in Colombia with BuildaBridge and Eastern University Urban Studies students. While here in Bogota we have worked in collaboration with local community artists to run an arts camp for kids. Two of our members conducted a 3-day training for artists on the BuildaBridge Arts in Transformation model for over 50 local artists. A mural was painted on a site that had been the local trash heap. We also have visited community arts organizations in Bogota, and have been inspired and humbled by the dedication and creativity of those seeking to bring arts to kids in deprived communities. Throughout we have been partnering with a local Christian community development foundation, Communidad Vita. While we came to give our time and expertise, in many ways we have received as much or more than we have given.
For me this has been an eye-opening experience as to the power of the arts to teach life lessons and inspire hope in people. I spent the week assisting the drama instructor, Stevie Neale. Stevie is a gifted theater improv artist. Along with her Colombian counterpart, Johany Mora, I was able to see kids with no drama training begin to grasp the essentials of the acting craft. We literally performed street theater, using a busy street as our drama space, since none other space was available to us. Several times every afternoon, we would have to move our props out of the way of an oncoming vehicle. While it was frustrating and disruptive for those of us teaching, the kids took it in stride. This was their life, their reality. This street was their playground, and despite disruptions and distractions, they were able to learn and put on a simple play about helping one another in their neighborhood. At the end, the kids and adults thanked us for our work, and yet they had been the teachers in many ways. 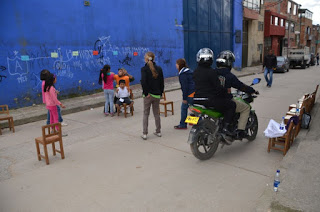 The most frustrating and therefore humbling, thing for me was being an English speaker in a Spanish speaking country. My elementary school Spanish was hardly sufficient to effectively communicate with the kids I worked with, shop owners we visited, or friends we encountered. Throughout our time here, I have learned a number of Spanish expressions, but in the midst of trying, I experienced the mental and emotional fatigue that anyone must feel when being in a place where their first language is not spoken. While I was able to get by often with broken Spanish, hand gestures, and a friendly English-speaking passerby who would help translate, in the end that part of the trip was exhausting. Not being able to communicate on simple matters, not to mention complex thoughts, after a while wore me down. While I have always tried to be sensitive to people in the U.S. for whom English is not a first language, I come away from this trip with a much deeper appreciation for the challenges non-English speakers face in the U.S.. Furthermore, to those who want to press for “English only”, I suggest they go to another country for a few weeks, and see how easy it is to learn a language when you are just trying to get by.

I feel like I have gotten to know my colleagues and students much better over this time. When you spend two weeks with folks in such an intense period, you see each other much more clearly. This probably has been the most gratifying part of the trip. Moreover, I feel like I have made some friendships here in Bogota, which I hope can be nurtured and continued. I came to this country with an open mind, and I leave with a full heart. I am thankful for those who made the trip possible, and for the many people I encountered and the things I have learned.