We Are Doomed to Repeat History, If We Don’t Know Our History Today, we visited Selma, AL, the site of a major voting rights campaign in 1964-65. Selma is best known for “Bloody Sunday” when marchers crossed the Edmund Pettis Bridge heading out of Selma and were met by a wall of state troopers and local police who beat them back with billy clubs and tear gas. A few short weeks later, after Martin Luther King had been invited to join the Selma movement, did they receive an armed guard by those same State Police (who had been deputized as national guardsman) as they marched from Selma to Montgomery confronting the powers of the Alabama State Government under Gov. George Wallace, who had tacitly approved of the police’s earlier violent action.

However, before and after the cameras and the national media attention left Selma, there were hundreds of brave people, many of them children who bravely confronted the powers that disenfranchised nearly all the black people in western Alabama from voting. We had the honor of meeting two of those people, Frederick Douglass Reese and Joanne Bland. Rev. Reese was president of the Voting Rights League, president of the teachers’ association and the pastor of a local church, who bravely marched with others to the courthouse demanding to be allowed to register to vote. Again and again they were pushed away. Ms. Bland, who gave us an “alternative” history tour of Selma was only 12 years old when she marched over the Edmund Pettis Bridge, but by the time she was 11 had been arrested 13 times for going with countless other young folks to the courthouse demanding that her parents be given the right to register to vote.
In their presentations to us, both Rev. Reese and Ms. Bland stressed that this history of civil rights is being suppressed today. In Alabama children only learn a cursory history of Civil Rights as part of state history in 4th grade. Only in the last 10-15 years  have the key sites been restored and a visitor center built commemorating the events of 1965. Talking with some current high school students on our trip, I learned that they learn very little if any history of the Civil Rights Movement except some key events like the Montgomery bus boycott and the “I Have A Dream” speech. Meanwhile in neighboring Mississippi there are few, if any commemorative sites to the events of the 1950’s and 1960’s that occurred there. Apparently the power structure would rather we forget our history.
While I feel like I am visiting place of near holy significance, I realize that for most white Americans, the Civil Rights is past history that is over and done with and that it need not be remembered any more. However, the message we repeatedly heard today is tell this story, don’t let it die; the struggle continues, even though some victories have been won.  When we look at the recent efforts leading up to the last election to restrict certain people’s right to vote, we see that the desire for the powers-that-be to limit or take away certain people’s rights – especially those who are people of color and who are poor — still exists and must be resisted. Too many people like Joanne Bland and Rev. F.D. Reese shed their blood and gave themselves to the struggle so that those rights might be available to all citizens. 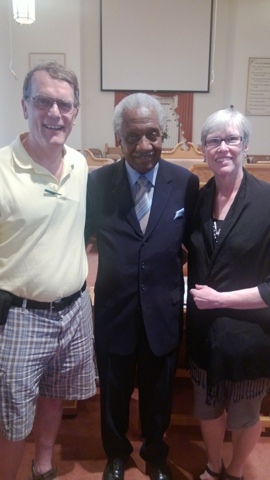 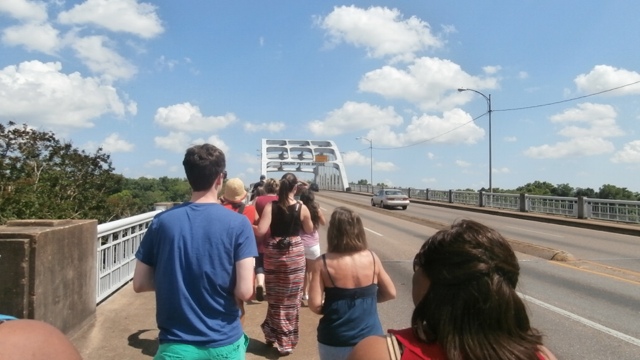