Win One, Lose One …. and a Disturbing Trend 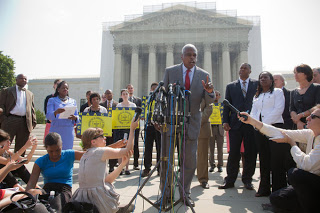 This past week the U.S. Supreme Court rendered two momentous decisions that seem to move in opposite directions when it comes to human rights. On Tuesday, the Court essentially gutted the Voting Rights Act of 1965 effectively freeing nine Southern states from having to submit changes in their election laws to the federal government. This law had been a source of hope for many people of color, especially African Americans, when so many states with Republican majorities in their state legislatures passed Voter ID laws which covertly, and in a couple cases overtly, were designed to make it more difficult for poor people and people of color to vote, thereby making it easier for Republicans to win elections. Also many of those same states have so gerrymandered elections districts that these communities have been further politically marginalized. ( To see full article on this decision go to this link)

Then on the Thursday, these same judges declared the Defense of Marriage Act (DOMA) to be unconstitutional, thereby allowing gay/lesbian couples the right to have the same legal protections and benefits as heterosexual couples. Until this ruling gay couples were defenseless when it came to inheritance law, tax benefits, spousal insurance protection and so on. (For full article on this decision see this link)

On the surface these two decisions seem to contradict one another. The first stripped a group of marginalized people of protections and rights, while the second gave a group of marginalized people rights that had been previously denied. I wondered: what is the underlying logic that ties these two decisions together? While I can’t be certain, it seems that a common thread is a focus on state’s rights. In both cases the decision went against the primacy of federal law in favor of allowing states to legislate on matters in ways they see fit. So in the Voting Rights decision, the Court removed federal restrictions on state actions, whereas in the second it returned state sovereignty from something that had been regulated at a federal level. Even though I am glad for the DOMA decision, I am troubled by this underlying logic.

When we look back at the Civil Rights Movement, significant changes in the social and political status of African-Americans in the South would not have occurred had not the federal government stepped in. African-Americans were beaten, lynched and killed with impunity while the perpetrators got away scott-free. Jim Crow laws institutionalized huge disparities between the races and despite the rhetoric of “separate but equal” provided far lesser quality for African-American when it came to education, health care, parks and the like. African Americans could be (& were) arrested for minor infractions; it was the process of getting arrested in large numbers that finally got the federal government’s attention, along with the violence that came with it. On the issue of voting rights itself, thousands of people were threatened and beaten, and some killed simply trying to exercise (or help people exercise) their constitutional right to vote. Even though the federal government was timid and slow to intervene in most cases, there would have been no Voting Rights Act of 1965 if Presidents Kennedy and Johnson had not forced the Southern states to amend their laws and practices so as to treat all people of all races as equal under the law.

Underlying the Court’s decision is a shift in understanding of the role of government. Political theorist John Rawls saw a primary role of the government as providing for and protecting society’s most vulnerable; no one was to fall below what was minimally required for meeting their basic human needs. By contrast Robert Nozick focused primarily on individual liberty; an individual’s rights took precedence over the regulatory action of government, those regulations that assured that the basic needs of all people in society were being provided for and protected. Nozick went so far as to say taxes (the main means by which wealth is redistributed) were “forced labor.” The eras of Kennedy and Johnson tilted (inadequately in my view) toward a Rawlsian view, whereas today we are moving significantly toward Nozick’s view.

Increasingly our state governments don’t care about the most vulnerable, be it around civil rights, health care, education or essential services. Not only can this focus on rights be seen in these recent Court decisions but also in the Court’s ruling on the Second Amendment making the right to own a gun on a par with the right to free speech and religious liberty. It can also be seen in the ruling that allows corporations to be seen as individuals when it comes to political contributions. The rights of the powerful against the vulnerable, the dominant class against the marginalized, the rich against the poor are allowed to run amok, free of any constraint that might be put upon them by the federal government.

Altogether I see the Court’s decision as signifying a troubling trend that moves us further and further away from any concept of the “common good,” and more and more toward everyone fighting for themselves and their rights.  U.S. society is degenerating and devolving so that the poor and the marginalized can not look to their government for assistance; government is  now the protector of the rights of the few over against the needs and suffering of the many. I am pleased for those gay and lesbian couples who now can enjoy the benefits denied them by DOMA; however I worry about the rationale that may underlie that decision and what it says about where we are going as a society.