Who is Paulo Freire and Why Should You Care?

Recently, James Kirylo (Professor of Education, University of South Carolina) and I published Paulo Freire: His Faith, Spirituality and Theology. This book was for me a longtime dream and a labor love that began ten years ago when I wrote a paper on “Paulo Freire’s Concept of Hope”, as part of my tenure review process. That dream began to take shape when James and I met over three years ago at a conference and began discussing the idea for the book. For those familiar with Freire’s work, this book explores a previously under-researched part of his life and writing: his Roman Catholicism and deep Christian spirituality.

However, after I announced the book, I realized that many people had never heard of Paulo Freire, and so I want to say a bit about who he was and why his work his so significant for us even today. 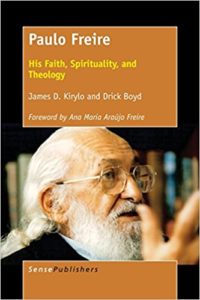 Paulo Freire was born in 1921 to middle class parents in the northeastern Brazilian city of Recife. However, when Paulo was still a boy his father developed arterial sclerosis and a few years later died when Paulo was 13 years old. That tragic death, coupled with a worldwide economic depression, thrust the Freire family into state of poverty that was to alter the course of his life and change his perspective on who he was in the world.  Through a series of fortunate events, Freire was able to finish school, and went on to study law. However, Freire’s passion had always been literacy and teaching, and even as he attended law school he taught Portuguese in a secondary school. He never actually practiced law and continued studies in philosophy and linguistics, and eventually was appointed the Director of Education and Culture of the Social Service for the Brazilian state of Pernambuco.

In that role Freire worked with others to develop a teaching approach that enabled illiterate adults to read in approximately 40 days.  The significance of this was at  that time in Brazil, one had to pass a literacy test in order to be eligible to vote; thus, most poor, illiterate Brazilians did not vote. This allowed the Brazilian government to be largely controlled by a small wealthy, elite group of businessmen, landowners and politicians. It was a system much like  U.S South in the early 20th century that prevented most black people from voting. Freire had been charged for this task by President Joao Goulart, a Socialist, whose constituency were comprised primarily of the poor and disenfranchised of the country. Goulart’s motivation was not so much altruistic as it was calculated; he needed poor people to be able to vote if he was to stay in office.  What was so revolutionary about Freire’s teaching strategy is that he not only taught people how to read well enough to pass the literacy test, but also in the process he would pose questions that would prompt people to examine the political, social and economic forces that were keeping them in their impoverished state. This approach which Freire eventually called “reading the word, and reading the world,” made him a threat to those in the power elite; he was teaching the poor how to think and act in ways that undermined their control of the country.

In 1964 Goulart was overthrown by that elite through a CIA-supported military coup, and Freire was thrown in jail and eventually exiled. Freire ended up in Chile, where he continued his literacy work. While there he 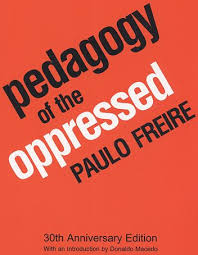 wrote two books: Education for Critical Consciousness, a reflection on his literacy work in Brazil and Pedagogy of the Oppressed, a work outlining his pedagogical and political philosophy. Pedagogy of the Oppressed was translated into English in 1968, and became a seminal work for all educators and activists in the U.S. seeking to create a more critically aware and politically active citizenry.

In Pedagogy of the Oppressed, Freire introduces many of the key concepts that was to characterize his later writings. Some of those concepts were as follows: 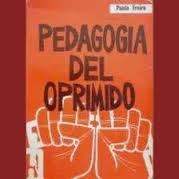 Freire went on to write numerous books and articles, some of which are still being discovered and translated into English. I first encountered Freire in 1981 when I read Pedagogy of the Oppressed as a seminary student. I was touched by what seemed to be profound insights into the nature of humanity, the world, and how to bring about positive change. However, while I tried to implement some of his ideas, I had no one with whom I could discuss and bounce off ideas, and so my interest in Freire lay dormant  for years. Then I encountered him again in 2000 during my doctoral program. This time I was able to engage more fully with his ideas, and he became the guiding light for my thinking about teaching and learning, community change, and engagement and solidarity with people who are disenfranchised and oppressed.  Students can rarely get through one of my classes without reading something by or about Freire, as his philosophy of learning and social change is central to my thinking and life.

I am not alone in this “epistemological curiosity” (a favorite term for Freire) about his life and work. Even though he died 20 years ago (1997), every year there are dozens of academic articles and books about Freire or drawing on his work. In schools, universities, neighborhoods, villages and barrios all over the world people grapple with and apply Freire’s fundamental ideas to their contexts. While during his 16-year exile Freire worked with the World Council of Churches and took his literacy pedagogy to countries all over the globe, and so he is known and revered literally around the world.

However, more than all that, Paulo Freire was a person who loved people, enjoyed being out in nature, appreciated good food, and was a devoted “friend of Christ” (his term). He was a man who wanted to take all that he had experienced and learned, and give it back to others to bring about positive social change. Near the end of his life Freire wrote these words:

I could not have come to the world in order to preserve the world as it is. I do not believe in the immobility of history. I want to make some contribution to change, to transformation because it is by transforming it we make it better.” (Paulo Freire at the Institute, In The Progressive Teacher, 1995, p. 19)

This was the kind of man he was, a man who wanted to make the world a better place not just for some, not just for the privileged, but for all; a man of love, faith and hope.; a man worth knowing, and in my view, a man worth learning from.