“Insanity is doing the same thing over and over, expecting different results.” (Source Unknown)
When I heard of the tragic shooting at Umpqua Community College in Roseburg last week, my first response was sadness, followed quickly be a sense of resignation That tragic scene is one we have seen played over and over again.
In response the media talking heads, as well news outlets across the country, began discussing what we can do about these shootings. Pro-gun advocates were quick to respond with their mantra that “guns don’t kill people, people kill people,” so don’t blame the guns and don’t step on the 2nd Amendment. Republican candidate Ben Carson even said we should train and arm kindergarten teachers. Democratic politicians, including Pres. Obama and Hilary Clinton, expressed their sadness and outrage, and called for changes in this or that legislation, while the pro-gun advocates politicians insisted we have enough laws that just need to be enforced. It all sounded so much the same as after every other highly publicized shooting.
And as I expected, over the past week I received a flurry of emails from all the gun violence

prevention groups I am part of, encouraging me to share their outrage and write my representative, sign a petition, or send a donation to help their efforts to stop this insanity. My Facebook page and Twitter feed were filled with links to articles, charts, and videos expressing how ludicrous the gun lobby’s argument is, yet how much they control the politicians with their campaign contributions. All of us this is true and sincere, and yet, this predictable response of the prevention community also seems a bit insane: doing the same thing over and over again expecting a different result.

While the incident in Oregon got national play for a few days, every night in cities and communities across the country the same violent scenario plays out on a smaller, less noticeable scale. Young people, particularly young men, are killing each other at an alarming rate with guns acquired illegally through straw purchasing. Christopher Harper-Mercer, the Oregon shooter, acquired his guns legally, which raises serious concerns about the background check system in this country. The unnamed young man who killed another unnamed young man last night on some city street acquired his illegally through the straw purchasing process. Yet both are joined by the reality of living in a gun-worshiping culture that ultimately benefits the firearms manufacturers and dealers who reap the profits from both the legal and illegal gun market.
Then just yesterday there were shootings at colleges in Flagstaff, AZ and Houston, TX . As I have taken in all of these events and the predictable reactions on both sides, I have realized that the insanity is not just with the gun lobby, the insanity is with the gun violence prevention community too. We keep responding the same way, hoping for a legislative response that isn’t going to come. So we have to come up with another approach, another strategy, because the one we’re using ain’t working.
Last weekend in Philadelphia, the Komen Foundation (formerly The Susan G. Komen Breast Cancer Foundation) held its annual Three Day Breast Cancer Walk raising over $2.7 million in one weekend. This is just one of hundreds of such walks held in communities all over the country. In the spring there will be the Race for the Cure and several more millions of dollars will be raised. If you have ever been to a Komen Foundation event, you know they are more than just a walk or race. Komen events are a production, a rock concert, where you the participant are the rock star. Every participant is robed with pink shirts, hats, scarves – you name it. There are jumbotrons with media folks talking up the event to the whole metro area. There is loud music and dozens of sponsors handing out free goodies. There is a high energy MC pumping up the crowd, and when you finish your walk or run, you are publicly congratulated for your effort. It is a masterfully orchestrated event designed for maximum impact.

While the Komen Foundation has raised all sorts of money for breast cancer research and care, they also have made breast cancer an issue of public concern. Professional sports teams wear pink shoes and arm bands, celebrities tell their stories, and political leaders show up pledging their active support. Why?—because Komen has spent huge amounts of money on social marketing, convincing you, me and the powers-that-be that we need to care about those suffering from breast cancer. They didn’t pass a bill, they didn’t just send an email blast; they changed culture and the way we think about breast cancer.
Public health advocates have declared gun violence to be an issue of public health, a social disease devastating lives in our society. However, we don’t talk about gun violence as a terminal, social disease; rather it is debated as an issue of personal rights. Organizations like Komen have raised personal and public awareness about their public health issue, and at the same time changed the way we think about it. The Multiple Sclerosis Foundation has done something similar for MS. Last weekend I was supposed to go on the MS City to Shore Ride, but it got cancelled due to storms. I knew little about MS before joining the race and raising money for the ride, but because I wanted to go on a long bike ride, I became a promoter of their cause; why couldn’t the gun violence prevention do the same thing?

Instead of raising money to change the mind of entrenched politicians, we need a popular movement for one of the most deadly public health issues of our time: gun violence.  We need to have thousands of people marching, biking or running for the cause of gun violence prevention. Since the NRA has got the politicians to defund research in the CDC, we should raise millions of dollars for research into how to reduce gun violence, to train local police how to look for would-be shooters, and support for the victims and families traumatized by gun violence. We should sponsor huge ad campaigns like Truth.com did against the tobacco companies. I am imagining something much bigger, much splashier, with much more impact. Something on the order of the Million Man March for gun violence prevention where the focus is not on whether one does or does not own a gun, but how we can work to reduce the violence.
The group we would be primarily trying to influence would  be neither hardline pro-gun folks like those who showed up to protest Pres. Obama’s trip to Oregon to speak with grieving families, nor would it be folks like me who never owned a gun and never wanted to. Rather, the focus of this campaign needs to be those gun owners who like to hunt, and target shoot, or who have a handgun in their house safely locked away, but who also recognize the unfettered distribution of guns is not the way to go. We want to focus on those folks who are caught in the middle of the polarized debate, those who are deeply concerned about safety for their families, but don’t know if the answer is more or less guns. We need to big splash events like the Race for the Cure with t-shirts, celebrities and music, where the talking heads and the politicians feel compelled to show up, where sports teams can wear apparel that symbolizes the need to keep our communities safe and corporations put our logo on their public relations literature.
Where are the social entrepreneurs out there who have the grit and the experience to make the cause of fighting gun violence as popular as fighting breast cancer or MS? No one needs to decide whether they are for or against gun rights, but could work together to help victims and fund research on how best to reduce gun violence. My point is basically this: gun violence is public health disease rooted in a sick, violent culture. We need to address this problem at the root, we need to change culture.
Breast cancer has the Susan B. Komen Foundation and the Race for the Cure; AIDS has the AIDS Walk; Multiple Sclerosis has the MS “City to Shore” bike ride; Alzheimer’s disease has the Alzheimer’s Walk. What organization will be created to make the reduction of gun violence an event and a production, you can’t ignore and can’t stay away from? 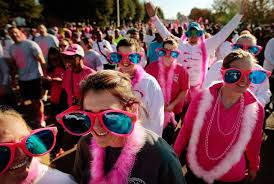