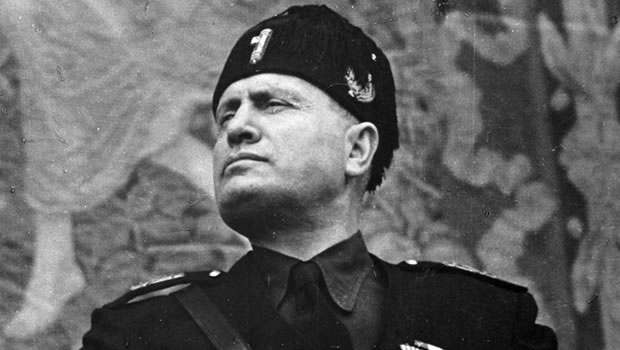 A lot of folks on the political left have been throwing around the F-word when referring to our 45th president.  Except for knowing that Italian dictator Benito Mussolini (pictured above) identified proudly as a Fascist, led his country in World War II to inglorious defeat along with Adolph Hitler, and ended up being executed, that is all I have ever known of it.  So, I decided to do a little digging. Here is what I found:

Fascism is a form of extreme right-wing ideology that celebrates the nation or the race as an organic community transcending all other loyalties. It emphasizes the myth of national or racial rebirth after a period of decline or destruction.  … Fascism tends to celebrate masculinity, youth, mystical unity and the regenerative power of violence.  Often, but not always, it promotes racial superiority doctrines, ethnic persecution imperialist expansion and genocide.  At the same time fascists, may embrace a form of internationalism based on either racial or ideological solidarity across national boundaries.

Lyons goes on to describe fascism as a paradoxical mix of populism – appealing to the basic needs of the common person – and authoritarian forms of governance. They often create a kind of unity around a common threat or perceived enemy.  Fascism tends to use violence and the threat of violence as a means of control and as a way to suppress opposition. Distinct from both liberalism and conservatism with their commitments to certain political ideals and seeks to return to tradition-based values, institutions and hierarchies. 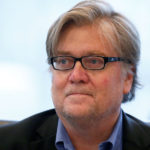 While back in March 2016, then-candidate Trump was caught unknowingly quoting Benito Mussolini  and became the subject of a Daily Show’s Trevor Noah’s comedic routine. However, Steve Bannon, Trump’s chief advisor is not so glib or easily ridiculed.  Bannon has come to be recognized as “the main ideological mover of the administration” and one who is instrumental in shaping many of Trump’s foreign and domestic policies. While many on the left have criticized Bannon for his leadership of the ultra-right Breitbart News, he is no shrinking violet.  He is a voracious reader, a Harvard MBA, a former Navy officer and former investment banker who left Goldman Sachs to head Breitbart. He refers to himself as an “economic nationalist” and during the primary season referred to Trump “as a good vehicle to get into power so that he [Bannon] can accomplish his objectives.” Now he is there, right beside the seat of power. 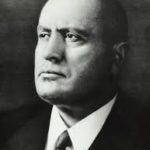 Bannon has often cited a little known Italian philosopher named Julius Evola, who was best known as a leading proponent of Traditionalism, “a worldview popular in far-right and alternative religious circles that believes progress and equality are poisonous illusions.” It was Evola’s writings that sparked the rise of the Italian Fascists with its vision of “bourgeoisie-smashing new order.” Today far right groups in Greece and Hungary draw their inspiration from Evola. Bannon himself has suggested Julius Evola as reading for the intellectually driven nationalist Alt-Right.

While quoting a fascist inspiration no more makes Bannon a Fascist than quoting Jesus makes one a Christian, it does raise some harrowing concerns. If in fact Bannon sees Trump as his vessel, and Trump gladly embraces an authoritarian, no holds-barred, crush and berate the opposition, macho leadership style, then all the better for Bannon. If the anti-intellectual Trump can unknowingly quote the Italian dictator and not blink, then who is to say what is going on.

As the presidency of George W. Bush unfolded, it became quite clear to many observers that the ideological driving force behind the presidency was Vice President Dick Cheney. I don’t think it is too far a stretch to say that Steve Bannon has the potential to be “Trump’s Dick Cheney.” If so, then there are many strains of the Bannon-Trump governing style and ideology that mesh nicely with the ideology of the defunct and disgraced former Italian dictator. The question remains: Will the president’s supposed Republican party have the guts and the wisdom to see who and what is going on before polarizing rhetoric and harsh policies drag us down? The decisions of the courts to halt the ban on immigrating Muslims, and the few courageous Republicans who have had the courage to break party ranks on cabinet appointees are a start.  Yet more Republican leaders need to wake up and step up, if the Bannon train is going to be slowed.

However, the rest of us also need to keep our eyes and ears open, and perhaps go back to school to see what may lay out of view but is very much in play in the way #45 acts and speaks in the months ahead. What I have shared here is only scratching the surface and admittedly could be biased against Bannon and Trump,but it is enough to keep me learning, listening and watching to see if fascism in some form continues to show its face. 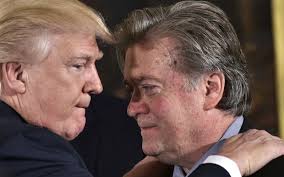