What About the Thieves?

This past week and next (Aug 1-14) I am in Bogota, Colombia with a group of Urban Studies students from Eastern University working with the arts organization BuildaBridge conducting training for community artists and running an arts camp for children alongside of some of those local artists. We are working with a local Christian church and foundation that is seeking to do community development in a neighborhood called La Montana (the mountain), which literally sits on the side of a steep hill that lies between a middle class neighborhood below and an upper middle class neighborhood above. Unlike the neighborhoods on either side of it, La Montana has no pavement on its streets, no garbage pickup or other basic services. The houses mostly are poorly constructed and many tap into power lines illegally for any electricity they might have. In fact many of the people came to live in this neighborhood simply by taking up residence without any legal permission to do so, and so could be removed at any time.

One of the things we have heard repeatedly during our time here from people in the community and community workers is the problem of violence directed at children. One teacher told us that in neighborhoods like La Montana that are desperately poor, children are required by their parents to bring home some food or money to help support the family; when they fail to do so they are beaten. Young girls are raped by their fathers and step fathers, and drugs are a constant problem. As a result many of these children grow up to pursue a life of drugs and violence and the cycle continues.

Running thru La Montana is a very steep path from top to bottom. While it is not particularly long, one can imagine at certain times of day or night, it might not be particularly safe for outsiders to the neighborhood without an escort. All of this has led me to reconsider the Biblical story of the Good Samaritan, told by Jesus in Luke 10. The point of the story is to illustrate the qualities and actions of a “good neighbor” and focuses on the selfless action of a Samaritan who goes out his way to help a man robbed and beaten by thieves. The actions of the Samaritan are contrasted with the callous disregard of a priest and a Levite who pass by without helping even though they see the man on the side of the road. However, I have never heard or read any comment on the thieves in this story, even by Jesus.

One of the contributions liberation theology makes to our understanding of how to read and interpret the Bible is the importance of reading the Scriptures in context not only of its time, but also in the time and place of the reader. Working in La Montana, a community of “thieves” and other illegal persons, causes me to ask “what about the thieves?” Like the path in La Montana, the road from Jericho to Jerusalem on which the story of the Good Samaritan occurred, was a steep and windy road with many places for thieves to lie in wait for their victims. For all we know it could have been a place where people not allowed into either Jerusalem or Jericho eked out an existence in the caves and rocks of that area. Perhaps that road was “home” to a number of people who survived by way of any means possible.
So what about the thieves? Why were they on the side of the road and what led them there? What were their lives like before this incident that they would be driven to a life of violence and anti-social behavior? What beatings, rapes and suffering had they endured at the hands of others? How had their worldview been shaped by desperate circumstances? 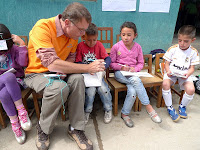 All commentators on this story, including Jesus, treat the thieves as an afterthought, yet this week I find myself moving among thieves and potential thieves who are 5-10 years old who are simply trying to survive in a world that has treated them as an afterthought. Through the arts camp we are attempting to teach basic art skills (music, dance, sculpture, theater, and painting), and essential life skills, and to plant seeds of hope that can be further watered and nurtured by local artists and community workers with whom we are working in an effort to direct the lives of these little “thieves” in other directions.
However, the issue is not just Colombian. In the U.S. we have criminalized nearly 12 million undocumented migrants to the U.S. who like the kids of La Montana are just trying to survive. The rhetoric around illegal immigration would make one think the so called “illegals” are just parasites and scabs on our economy. However anyone who has taken the time to learn the story of what it takes for people simply to get into the United States would know that scabs and parasites don’t risk their lives multiple times in multiple ways just to become a hanger-on. They don’t work for less than minimum wage and live in tight and crowded quarters just to “steal” someone else’s opportunity. 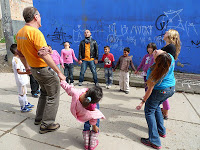 Catholic priest and writer Henri Nouwen introduced me to the theological insight that all persons are both sinners and sinned against. Traditional Christianity has tended to focus on the former and call people to confession, repentance and a change of lifestyle. However, what is often overlooked is that the “sins” that we and others often commit are a response to sins committed against us. For instance, we know that most people, who abuse children, were abused as children themselves. Their “sins”  reflect the fact they were sinned against when they were younger. I wonder about the thieves in the story of the Good Samaritan, could it be their actions on that day were a response and result to the abuse and degradation they themselves had and were suffering?
Of course we cannot know, but it’s a thought that causes me to look at this familiar story in an entirely different light, and to consider again that the categories we often put people in dehumanize and objectify them in ways that make them an afterthought. Were I in the crowd the day Jesus told this story, I would want to say “Jesus, I get your point about the Good Samaritan and all, but what about the thieves? How should we regard them? Why were they there and how has sin been inflicted such pain and suffering on them that they could do such a heinous thing to innocent traveler? Of course, we can’t really know, but after this week, I will not be able to read that story without considering the thieves as real people with real stories too. 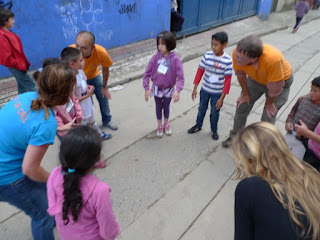