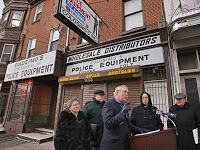 Yesterday (Sept 22), a group of us who have been leaders in Heeding God’s Call met to plan and strategize as to our next actions in the local gun violence prevention movement. A significant part of our conversation centered around what are next moves should be in relation to Colismo’s Gun Shop, the store that has been the focus of so many of our actions over the past 8 months. Little did we know that while we were meeting the U.S. Attorney’s office was charging Mr. Colism with falsifying statements and failing to keep accurate records. On a practical level, it appears that our activities may have called attention to this particularly notorious gun dealer, and moved the process along in bringing him to justice. On another level, today feels like a vindication of our efforts, and an affirmation that God is indeed working in and through our efforts.

You may read the whole article at http://www.philly.com/philly/news/20090922_ap_fedschargephiladelphiagundealer.html

PHILADELPHIA – A Philadelphia gun dealer that has been the target of religious activists is now charged in federal court with making false statements and failing to keep records required by law.

The U.S. Attorney’s Office announced charges against Colosimo’s Inc. after business hours Tuesday. A man who answered the phone at the business said “What can I say?” to a reporter seeking comment and eventually hung up. Owner James Colosimo has previously said he follows all laws in his business.

Activists have targeted Colosimo’s because of the number of guns sold there that end up being used in crimes. The owner has said that’s to be expected from a high-volume dealership like his. He has said he believes he has saved lives by selling guns to police departments.