Uncovering the Lie of Democracy While Acting in Hope

As a federal government shutdown looms due to the Republican threats to not pass a budget bill and attempts to de-fund the Affordable Healthcare Act (so-called Obamacare), I am moved to reflect on the role of government in relationship to the poor and marginalized in our society. It is clear that leadership of the Republican Party no longer makes even a pretense of caring about those who cannot afford health insurance, attend underfunded public school systems, live in fear in neighborhoods wracked by gun violence, rely on food stamps for their meals and work for a grossly inadequate minimum wage. Their allegiance are to the business owners and wealthy donors who fund their political coffers. And while I point the finger at the Republicans, many Democrats have been bought off to be silent and inactive in the face of the suffering of the poor. Furthermore, as the new documentary “Inequality for All” featuring former Treasury Secretary Robert Reich, describes, the gap between the haves and have-nots is the greatest since the days before the Great Depression. Increasingly I find myself writing messages to my state and Congressional representatives, most of whom are Republicans that in essence say “you ought to be ashamed of yourselves.” The sad and amazing thing is they have no shame.

Despite the sanitized version of history we learn in school, I increasingly have come to realize that in the

United States it has always been that way. It took a runaway slave named Frederick Douglass, along with thousands of other nameless runaway slaves and a few brave white abolitionists to force the government to face its responsibility to treat the enslaved Africans in their midst with human decency. In the late 1800’s and early 1900’s it took a populist movement made up of farmers and laborers to challenge the government to pay workers living wages and to provide working conditions that were safe and clean. In the 1950’s and 1960’s it took a courageous group of African-Americans, starting with women like Joanne Robinson and Rosa Parks in Montgomery, AL, Septima Clark in Charleston, SC and Fannie Lou Hamer in Mississippi, followed by clergy like Martin Luther King Jr., Fred Shuttlesworth and Ralph Abernathy, and then thousands of young people to force the Federal Government to enforce its own laws against segregation and racial violence. In the 1960’s it took a group of radical students marching in the streets to call attention to atrocities of the Vietnam War and eventually drive Lyndon Baines Johnson to resign the presidency. While we call our politicians “leaders” in point of fact they are often keepers of the status quo on behalf of the few until they are forced to
act in ways that actually serve the needs of the common folk.

The other sad reality is that the vast majority of Americans, rich and poor, of all races and ethnicities, have bought the lie that our political leaders actually serve their best interests. Two years ago the Occupy Movement sought to reveal that lie by showing that the challenge facing the nation was not the debt limit the politicians were talking about, but the vast disparity between the 1% and the 99%. While Occupy itself has faded from view, it helped reframe the conversation. Michelle Alexander in her analysis of the criminal justice system has demonstrated that we now have a “New Jim Crow” that has disenfranchised millions of young men of color through the process of disproportionate incarceration. What is needed is a new populist movement, a new abolitionist movement, a new Civil Rights Movement that again calls our government leaders to account. 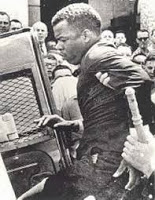 As an Anabaptist Christian (of the Mennonite persuasion) I do not expect much from government or look for government to act on behalf of justice and righteousness. I never have regarded the United States as any kind of Promised Land nor accepted the notion that God has given America some unique role in the world. Nor do I find comfort when our politicians, including President Obama, end their remarks with “may God bless the United States of America.” Government and its leaders are as depraved and twisted as the rest of us. However, I do have faith that people coming together on behalf and in solidarity with the poor and oppressed can sometimes force government to actually live up to its creed to provide “liberty and justice for all.”

For the past three years, I have been involved with an interfaith group, POWER, which has pushed the Philadelphia City Council to approve a referendum that if passed would require corporations doing business with the city and their subcontractors to pay all their workers a living wage. This same group is organizing across the state to make establish a fair funding formula for public education in the state of Pennsylvania; this will help assure that underfunded districts like Philadelphia and other cities are not short changed by the state when it comes to support for public education. POWER is also working with several other groups across the country for the passage of an Immigration bill that will help undocumented persons get legal status in the United States. All three of these efforts were not initiated by political leaders, but rather by groups of citizens in essence seeking to force the government to address the needs of all its people and not just a few. Now when these initiatives are passed, our job won’t be done because as we are seeing with Obamacare right now, we will have to continue to pressure our leaders to actually do what they say they are going to do.

At the same time, we cannot wait for leaders to act. In small ways we need to create pockets of equity and justice in our own communities. Faith communities need to partners with local underfunded schools and continue to provide assistance for the poor. Community groups need to find ways to promote economic development and to bring people together rather than allow them to be divided. Organic and public intellectuals need to continue to speak out to continue to uncover the lie that is American democracy. For myself I will continue to write, to organize and to join with others such as POWER. Therein lies my hope.