The Woman Who Shaped Me 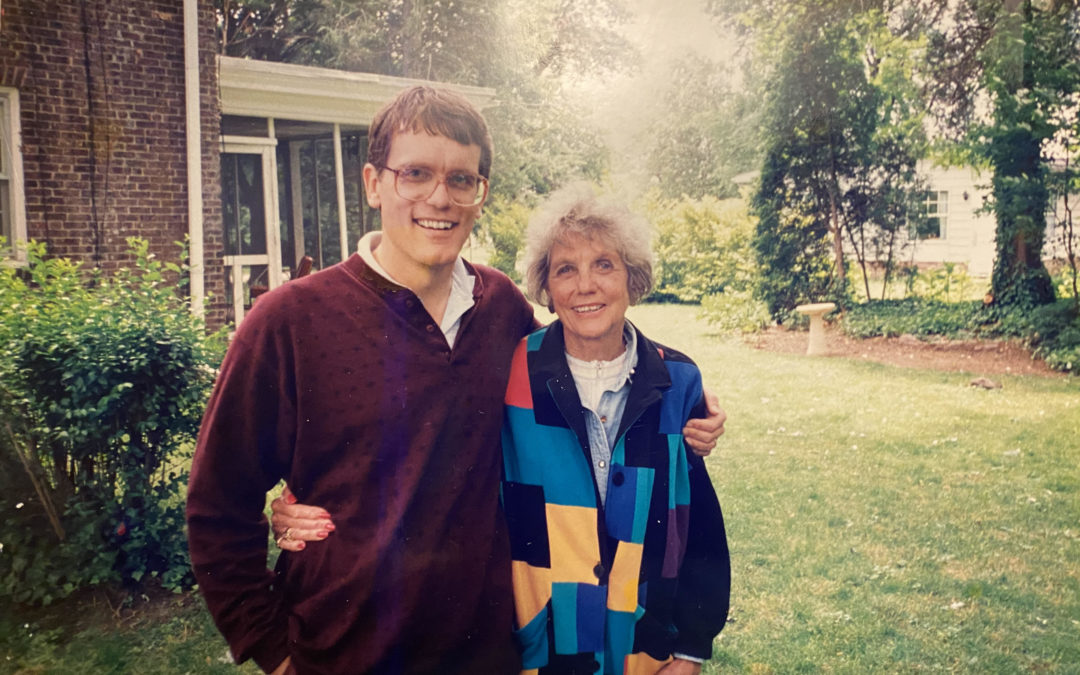 Most men I know first learn about the strength and endurance of women from their mothers. During this Women’s History Month I want to take this opportunity to talk about the woman who shaped me, Mary “Sis” Mullins Boyd, my mother.  On the 19th of this month, she would have been 94 had she not died 15 ½ years ago from Alzheimer’s Disease. The picture above was taken in the mid-1990s when the disease had begun to leave her disoriented a bit. Even so, she found joy playing on the floor with my children, who then were still quite young. Well into my adulthood she was my greatest supporter.

She viewed herself to be a traditional housewife to my father who was a businessman. However, she was anything but traditional in her day. I remember coming home from school one day around 1970, after hearing a presentation about what was then called the Women’s Liberation Movement. I told her about the presentation and then said:” Mom, I think you’re a liberated woman.” She was aghast and insulted I would say such a thing. And yet for years she had run a successful swimming lesson business, as well as provide leadership in groups and committees dominated by men. She served as a campaign manager for a college student who left school to run against a long-standing Republican state representative and only lost by a hair. She later introduced a program into our community called A Better Chance, which brought low-income, mostly African-American students into our lily-white upper-middle-class community, and faced down the opposition of many community nay-sayers. To her, this was just what she did, but to me, she made the idea of women being equal to men in all aspects of community life a no-brainer. She clung to the self-image of being only a mother and a caring wife, and yet to me she was more. I attribute my early embrace of feminism to her, even though she did not see herself in that way.

My uncle, her older brother, told me a story about Mom when she was a little girl growing up in the small town of Salem, Ohio. Salem had a small African American Community, the legacy of being a station on the Underground Railroad out of Kentucky on the way to Canada before the Civil War.  Apparently, there was a Black man who occasionally worked as a gardener in the yard surrounding her house. One time he asked my grandmother if he could come in and use the bathroom in the house. My grandmother in a nasty tone of voice flatly refused to let him in, and instead sent him to use the toilet in the unfinished basement. My mother, only a girl at the time, confronted her mother with her blatant disregard and disrespect for the kind man she had come to know working around the house. Hearing that story, I realized that in part my passion for racial justice had its roots in the way my mother treated everyone she met — with respect and dignity regardless of their race, class, or social position in life.  Now it’s not that she was an anti-racist activist like Anne Braden or the Grimke sisters (see my book White Allies in the Struggle for Racial Justice), but Mom planted a seed in me that has grown and developed.

While she was my greatest supporter, she could also be a tough critic. I remember one time when I was in 5th or 6th grade, she came to watch me play at a school basketball game. I was much bigger, and taller than my teammates, having shot up early in my life. Throughout the game, I berated my teammates for their poor play. Following the game, Mom took me aside and scolded me saying: Don’t your EVER put your teammates down like that again! I am so disappointed in you and the way you acted today.” Hearing those words, I was devastated and ashamed, and I never forgot that scolding.  I can’t say I never did it again (I am sure I did), but her message of treating people with respect and dignity has always stayed with me.

My mother once said that she felt that God reached out to her through her children. While her faith was simple, her love for my siblings and me was profound. When she was a teenager, a doctor told her she was too small and slight to have children; he got that one wrong — in the end she gave birth to 8 of us. In that sense each of us was a “miracle” she cherished and she poured herself into all of us. She was our cheerleader, our provider, our friend.

Mom was diagnosed with Alzheimer’s disease in 1992 at a time when doctors ruled out every other possible cause, and if nothing else could explain the memory loss, they called it AD. She had been showing signs of memory decline for several years and so the diagnosis was not a surprise to anyone who knew her at that time. After that diagnosis, she lived another 13 years. In the end she had shrunk down so much she was unrecognizable to me. Yet in my mind, she has always been a leader, promoter, and lover of people. As I think about the women who have guided and shaped my life, I can think of teachers and mentors, friends, and historical figures. But at the top of that list is my Mom, known to all simply as “Sis.”

Today I have the honor of being the father of three adult daughters. My wife has obviously had a tremendous influence on the wonderful and talented women they have become. At the same time I would like to believe that I have been able to pass something of my mother on to them as well. For in them I see the courage, love, and determination my mother passed on to me.

And so during this Women’s History Month when we remember and honor the great women in our history, I want to give tribute to my mother, not because she was famous, but because she helped me see and appreciate the way in which women have shaped the world, and can be our hope for the future.