The Search for Common Ground in the Prophets Dream 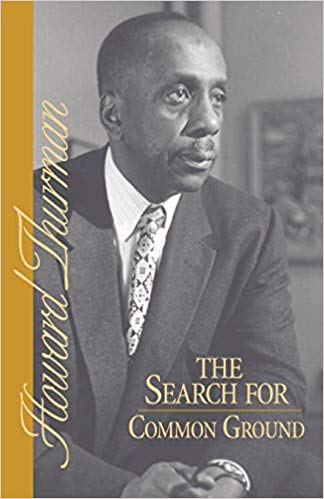 `On Monday, March 2, 2020, Dr. Mary Wade and I made a presentation at Pendle Hill, a  Quaker retreat and study center in Wallingford,  Pennsylvania in the western suburbs of Philadelphia. Our topic was “The Search for Common Ground” taken from the title of Howard Thurman’s 1971 book by the same name. In the fourth chapter entitled “The Prophets Dream” Thurman talks about the concept of utopia. What follows is my presentation on that topic.

Separation and Division in 1971

The book The Search for Common Ground was written four years after Martin Luther King, Jr. was assassinated. The movement which he led had begun to splinter. Many who had marched with him were divided over the breadth of issues to be covered, the role of violence vs nonviolence, and how or if  African Americans should relate to white people. There was the rise of the Black Panthers, and the Black Power movement. President Nixon had declared a “War on Drugs” which we now know was really a cover for a major crackdown on black people and the beginning of what today we call the New Jim Crow, mass incarceration.  – all these forces blew the Civil Rights Movement apart and no single leader had emerged to carry forth Kings’ unifying mantle.

Looking out on his society Thurman saw a growing divide. He wrote:

At this moment there is a vast urgency for separateness, for isolating the black experience from the American experience in general, and establishing on that basis a grand windbreak behind which the black community can define and articulate its unique identity as a self-conscious participant in American and indeed world society. (p. xiv)

He acknowledged that the separation was a choice black folks were making as means of survival. They were separating themselves as opposed to being forced to segregate. King had worked to end segregation and now Black folks were choosing separation on their own. As he wrote, young black people were engaging in “rejection of the white community rather than being rejected by the white community.”  Thurman recognized and respected the Black Power and Black is Beautiful movements, and saw them as a means to establish black autonomy in a racist society.  At the same time. Thurman noted that like him many black elders were troubled and confused by their children’s apparent rejection of all that Dr. King had lived and died for.  Even so, Thurman believed there was in the human spirit a desire for full and inclusive community, a common ground, a place where people of all races, classes, ethnicities, religions and ideologies could live together. As a result he regarded the move toward black separation and black autonomy only as “a stop-gap” toward  the direction American society needed to go.

Separation and Division Now in 2020

Today nearly 50 years since Thurman wrote this book, we find ourselves in a society as divided as the society in which Thurman lived. We are divided by race, by ethnicity, by citizenship status, by religion, by sexual preference and much more. We have an administration that foments division and seems to revel in chaos. They chant “Make America Great Again” but what they mean is “Make America White, Christian, and Straight Again.” We have an administration that gives its nod to White nationalists and to the wealthy, and foments fear of the immigrant, the Muslim and anyone who challenges their hate-filled agenda

The division in our country is real and deep, and as polarizing as many of us can remember. And while we may point at Trump and his supporters and say it is all their fault, honesty compels us to admit we have done our share of stone-throwing as well. Then as now, Thurman asks us the question: What will it take to help our divided nation seek a common ground on which all of us can stand? For some of us  this dream has faded and died. For others of us there is still a dream, but we are powerless and clueless as to how to make it happen.

The Interconnectedness of all Living Things

In  The Search for Common Ground, Thurman seeks to demonstrate that all living things – plants, animals and human beings – were created for mutual interdependence and community. He goes onto say that the human spirit cannot live in the forced separation from the created world and from other human beings. Our ability to survive and to grow and develop happened only because of the cooperative interdependence that people had with the earth, all living things and each other. Many of our indigenous cultures never forgot that. But our Western worldview that emphasizes individualism, profit and the survival of the fittest has brought us this point.

Utopia and the Beloved Community

In Chapter 4 entitled “The Prophets Dream” Thurman discusses the  concept of utopia.  He notes that human beings possess the capacity look into “a chartless future” and dream of and imagine a society where the pains and divisions of the present are no longer a barrier.  Thurman’s image of utopia is a nationwide community where the divisions of race and class are overcome. It is a place where all people can reach their full potential as individuals. He writes: “Community as the utopian dream is part of the basic aspiration of the human spirit.” (p. 55)

These words remind me of Dr. King’s utopian dream, that vision put forth in his famous “I Have a Dream” speech, that vision he referred to as the “Beloved Community.”  I did a little research and learned that the term “Beloved Community” did not originate with King. It was first penned in the early 1900s by a philosopher named Josiah Royce.  Howard Thurman picked up that the term from Royce and linked to the dream of freedom and justice that had sustained the Black Church through centuries of slavery, Jim Crow, lynching and the struggle for civil rights.  While we can’t know for sure, it very well may be  that it was Thurman who first introduced the term to Dr. King.

Both King and Thurman saw the “beloved community” as the antidote and alternative to the segregation and degradation that Black people in America faced on a daily basis. However, for Thurman desegregation did not go far enough. For him, the beloved community had to go much further than having black kids and white kids sitting in the same classroom, or black men and women being able to drink for the same water fountain as white men and women. The beloved community went much deeper. The Beloved Community was characterized by a depth and quality of relationships that overcame divisions of any sort.

Thurman had the opportunity to experiment with the idea of beloved community when he pastored the first intentionally multiracial church in the U.S., the Church for the Fellowship of all Peoples in San Francisco.  He later wrote of that church that they sought to create a fellowship where individuals could be their distinct and unique selves while at the same time sharing a deep harmony of spirit. King expanded on Thurman’s original vision and talked not only of a national community but also a global community that embraced both friend and foe, and was ultimately a vision that embraced all people regardless race, ideology, or nationality.

It is interesting to note that after King’s death Thurman never again publicly referred to “the beloved community” and he doesn’t in the Search for Common Ground.   Yet, in his discussion of utopia, Thurman envisions something much like the Beloved Community he and King both spoke about. What he adds in this book is that this vision was natural and normal for human beings. His study of religion, of nature, of psychology and much more led him to assert that this yearning for an all-encompassing community arises out of a basic need and aspiration of the human spirit. He says that utopia, this idea of the beloved community, is basic to what it means to be human. Thurman closes The Search for Common Ground  with these words ( which I have updated to be more gender-inclusive):

For this we were born, people, all people belong to each other, and those who shut themselves away diminish themselves and those shut others away destroy themselves. (p. 104)

The utopian dream of people of all races, ideologies and cultures coming together derives from our basic nature as human beings. To do less and seek less is to demean others and destroy ourselves. That is what Thurman teaches us.

What Do Thurman’s Words Mean Today? 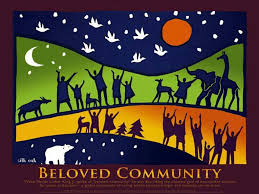 So what if anything does any of this mean for us today?  I can only speak for myself so let me speak personally.   Let me share what the search for common ground means for me.

One of the things that I have tried to do is to move out of my white privileged bubble to develop relationships with those whose race, religion, worldview, and way of life is different than mine. While the move out of the bubble is very uncomfortable and sometimes frightening, I have found overall it is most enriching. I have often shared with folks that one of the most profound spiritual events of my life was the 2010 U.S. Social Forum in Detroit. Fifteen thousand people from across the U.S., of all races and ethnicities, sexual orientations and political views working on issues from climate change to racial justice to the liberation of the Palestinians to the rights of Native Americans. While it was not a religious event, being in that space felt like the beloved community, the utopia Thurman talks about. So first  I suggest we move out our safe bubbles, and see what we find.

For me, Thurman’s call also means I must be in solidarity with those whose “backs are against the wall,” to be a part of groups and movements seeking to bring equity and justice to those most neglected in our society. In particular, that has meant for me becoming involved in calling for changes in our criminal justice system, working with POWER advocating for full and fair funding for Philadelphia’s public schools, and working with a community group in Southwest Philly pushing back on gentrification in their neighborhood.

But also, I am finding myself drawn in a direction I would not have picked for myself. I am being drawn to White Americans, particularly those White Americans who are frightened and overwhelmed by the diversity they see. I have been specifically drawn to talk to white folks about race, to find a way to address all the myths, fears, anxieties and just plain lies that create what Robin DiAngelo has called “White Fragility”- the inability to even talk about racism, much less seek to overcome it. So I have been writing and speaking to White Americans about their fears, their anger, their guilt, their confusion about race, and seeking to invite them to reach beyond their white ghettos.

This is what Thurman’s vision of the beloved community means for me. I can’t say what it means for others But I can say, it is not just thinking about these things, it is also taking action.

Sometimes people use the word “utopia” for an impossible, unrealistic dream. But for Thurman, utopia was a vision that draws one forward beyond what seems impossible, to what can and should be. As someone (I think Nelson Mandela) said: Something only seems impossible, until it’s not. Thurman says we are made for the beloved community, a seemingly impossible dream that can be possible. How we get there is for us to discover and do. 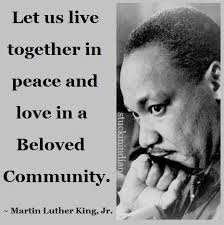