The Questions Raised by the Occupy Movement 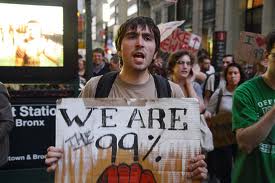 Like many of you I have been watching, reading and listening to the news about the Occupy Wall Street movement that is sweeping the country and indeed the world. Despite the attempts of critics to characterize the “occupiers” as leftist radicals, at least in the Philadelphia area there are grandmothers, housewives and regular folks lending their voice and support to those hardy souls camping out night after night around City Hall. Similar demonstrations have been cropping up in suburban and rural communities across Pennsylvania. Just as I saw when I visited Madison, WI this past spring, this movement is more mainstream than most leaders and commentators want to admit. People of all classes, colors and backgrounds are tired of the growing disparity between the few (the 1%) on the backs of the majority (the 99%).
One criticism of the Occupy Movement put forth by the pundits is that they have no clear agenda. The Tea Party folks have latched onto the notion of less government and lower taxes. However, the Occupy movement has set it sights on something broader and thus less clearly identifiable: the carnivorous corporate culture that allowed corporations, banks, lobbyists, and financial institutions like Goldman Sachs to make bundles of money legally but unethically with little more than a slap on the hand by the government. This corporate elite has spread the myth that more taxes will inhibit job growth, and yet after years of the so-called Bush Tax Cuts (which Obama signed into extension), we have had the worst recession since the Great Depression and jobs have been lost and not gained by this policy. People have finally seen through the fallacy of those myths, and are calling Corporate America and Wall Street to account. The problem is that it’s easier to march on City Hall or the White House than it is the disparate entity known as Corporate America. However, that doesn’t mean they don’t have an agenda.

Recently at a public forum, I asked Christian activist and author Shane Claiborne how he viewed the Occupy Movement, and he made what I felt was an astute observation. He said that for social movements to succeed they must have clear and concrete goals, and that the Occupy movement had not gotten there yet. However, he said he felt that the movement was raising important questions that we as a society need to consider. So I have been thinking about what some of those questions might be. 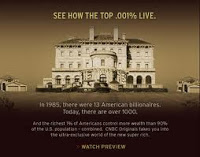 Now for my questions:
What kind of nation routinely incarcerates its citizens of color and poverty with harsh snetences, while letting corporate raiders get off with paying a fine?
What kind of nation bankrupts and undermines its public school systems and then blames teachers and students for not “making the grade?”
How long will we allow our government leaders to be beholden to lobbyists and corporate interests simply because they can give bigger campaign contributions than we can?
How long will we allow our sense of well-being as a nation and as individuals to be defined by our bank accounts rather than a sense of equity, decency, and justice toward one another regardless of race, religious creed, or ethnicity?
Could it be that what is happening in the Occupy Movement is an expression true, grassroots democracy, and that what passes for democracy every 2 or 4 years is just a shadow of the real thing?

These are the kind of questions the Occupy Movement raises for me. These questions call for a radical change not only in our economic policies but our whole way of ordering and thinking about our society. The questions won’t go away just because some pundits think it’s not “realistic.” My sense is that this movement is for real and the questions it raises need to continue to be asked until we as a people start moving in a different direction. The reality is that the movement must come from the streets, because as 19th century civil rights leader and abolitionist Frederick Douglass said the powerful never give up their power willingly, it must be taken from them.
Let’s just hope that power can be transferred without violence, that enough wealthy corporate leaders listen to folks like Warren Buffet, and say the jig is up. Those who are the top tier 1-2% must pay their dues, and  must give up some of their power and privilege if all of us are to have a just and equitable society. 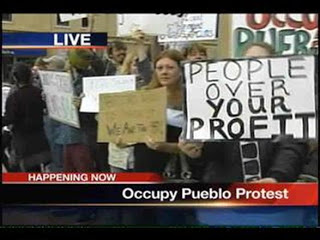