The Politician, The Prophet and the The "Fiscal Cliff" 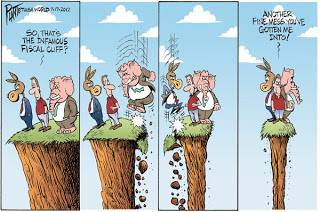 The news these days is filled with all the predictions and warnings about the so-called “fiscal cliff” that will befall the U.S. economy if the Democrats and Republicans in Washington cannot agree on a debt reduction package. Depending on what pundit you listen to, the failure to reach a deal could lead to a catastrophic recession, a slow decline, or a false alarm. Whatever the term “fiscal cliff” actually means, it is designed to shed fear and trepidation rather than true understanding of what is at stake, distract attention from the  the huge disparities that exist in wealth and power in this country, and will impact the poor far more than the banks or the wealthy. In the end the federal budget is not about money but priorities and people. The amount of money that special interests spent on both sides to sway the election could itself put a sizable dent in the federal deficit, so the underlying issue is not one of money but who gets to call the shots and direct those dollars.

The wealthy and powerful of the U.S. plutocracy have always positioned themselves to make out well no matter what. We forget that after Hurricane Katrina and oil prices shot up because the oil companies supposedly could not refine enough oil, Exxon-Mobil recorded the highest profit margins ever in its history. We forget that while banks were being bailed out during the recession, Goldman-Sachs and a small group of wealthy business types made a killing on that same recession. While the debate rages on about the Affordable Care Act (so called Obamacare), the health costs are not being contained and health insurance companies and drug companies will do just fine whatever way the political wind blows. While the Republicans say they want to balance the budget, they are fighting like hell to protect their wealthy backers, the 1-2% of the population with incomes over $250,000 that President Obama wants to tax at rates when Bill Clinton was president. So the issue is not about a balanced budget, but who calls the shots and who benefits, priorities and people.

The art of politics is compromise, so whatever comes out of these negotiations will be disappointing to anyone who has a strong opinion on the right or the left of this debate. No one group will get what they want, and so one must focus on what is most essential and most critical. This is why there need to be prophets to keep those principles before us.

Abraham Joshua Heschel, the Jewish philosopher and teacher of the mid-20th century wrote that “prophecy is the voice that God has lent to the silent agony, a voice of the plundered poor, to the profaned riches of the world.” He goes on, “The prophet hates the approximate; he shuns the middle of the road…The prophet’s word is a scream in the night [and] …the purpose of prophecy is to conquer callousness, to change the inner [person] as well as revolutionize history.” [from his book The Prophets]. While Heschel was describing the prophets of the Old Testament, he was also referring to them as a paradigm for the prophets of today.

Whether or not we see ourselves a prophets in the classic Old Testament sense, people of faith must honor and in some cases seek to speak with a prophetic voice that recognizes the  political necessity of compromise while at the same time “hating the approximate” and “shunning the middle of the road.” Franklin Delano Roosevelt was reported to have told an activist who supported him in the presidential election: “Now hold me to the promises I have made”. The prophets are the people who hold onto and press the promises.

President Obama was elected on the promise of developing a plan that provides health care coverage to all citizens. He said he would allow the Bush tax cuts to expire for the wealthiest Americans. He said the federal government should support public education reform, especially in low income districts. He said we should create the conditions for green jobs, create alternatives to carbon-based energy and oppose the Keystone Pipeline project running down from Canada through the Midwest. With a prophetic voice we need to hold the president to these promises. They represent principles of equity, of a concern for the environment, and a curb on the wealthy powerbrokers. Moreover those principles should move us press President Obama on the places that he has not gone far enough, such as on immigration reform and regulations on Wall Street and financial institutions.

Parenthetically, I acknowledge that there are those on the other side of this debate who are as equally passionate about their issues. I find the America that many on the Right propose is not an America I want to support. And those who espouse a “Christian” position, support a Christianity I cannot endorse. So there are real divides and deep passions which I acknowledge. We as citizens need to have civil dialogue on these differences, not simply on the basis of the issues themselves, but the underlying principles and values that inform our positions.

My  commitments are to the principles of providing equal access to all, holding the powerful and wealthy in check, caring for the environment and providing basic rights for all citizens regardless of color, ethnicity or economic status. How we live out and implement these principles is a matter of practical, political strategy.
The debate over the so-called “fiscal cliff” is at its heart a debate about values and deep principles. While the politicians negotiate, in the prophetic tradition we must press the principles that can make life just and fair for all affected.