The Last Veteran's Day – A Dream 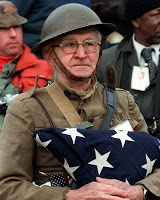 The Year: November 11, some time in the future
The Place: A VFW Hall

The old veteran closed the door on the VFW. It was the last time he would ever do this special act. There was no point. He was the last veteran, and today was the last Veteran’s Day. The VA Administration had closed years ago and the VA hospitals had been turned back to their local communities. It wasn’t that people did not appreciate his service, or recognize his sacrifice (although truth to be told, he had just had a desk job). The people and the government had not turned their backs on their service men and women. The reason was simply that there were no more military veterans.

Decades ago, the people of the United States had simply and consciously decided they were not going to initiate any more wars. After long consultations between former soldiers, academics, politicians and just plain regular folks, the people of the United States came to the conclusion that waging war was just not an effective way to spread peace, encourage democracy, secure human rights and provide so called “national security.” Instead some regular folks had started talking about encouraging peace and democracy by sharing their national resources and expertise, and building bridges of understanding rather than the hostilities and hatreds caused by war.

Blogs, tweets, and text messages had proliferated on the Internet, and a new idea began to emerge that maybe there was another road to peace other than war. Websites, List serves and Social Networking sites were formed where people shared their ideas of how to build a more humane and safer world. Slowly, at first imperceptibly, the tide of public opinion began to change. Eventually entertainers, celebrities and media pundits started chanting the mantra of “wage peace, not war.” The politicians, sensing the winds of change, began claiming they had come up with “a new idea for a new century” and all of a sudden leaders started talking about the benefits of peace.

Now don’t get me wrong, the change did not come without great struggle. First of all, the nation’s history had been written around the theme of wars won and heroes created. All the great presidents in the first two centuries had come to fame in part because of their conduct in time of war, either as soldiers or leaders or both. Words like “freedom” and “country” could not be without a simultaneous mention of war. The language of war and battle infused every area of life from education to business to sports to religion. The imagery and ethos of war was at the heart of American culture, and there were many staunch patriots, both liberal and conservative, who could not conceive of being an American without reference to war. The change had come at a great shift in values and perspectives.

Even more difficult than the cultural transformation was the change in economic thinking. So many of the nation’s service, manufacturing and financial institutions had been built around the military’s demand for war supplies. The makers of planes, cars, guns, food, and all the materials that went into those items had become dependent on the nation being at war with someone somewhere in the world at all times. And of course whenever there was an economic down turn, as happened in 1929 and 2008, the economy could always count on the military to provide impoverished men and women with no viable vocational prospects to join up and fill the ranks of the troops needed overseas. After the tide of public opinion had begun to turn, there were reports that came out that the CEOs of some of the major world corporations had actually held secret meetings trying to manufacture wars just to keep their businesses afloat. The corporations with major military contracts lobbied hard in Congress and spent billions of dollars making their point that war was good for the country. It created jobs and made heroes out of otherwise normal men and women.

However, the ones who had the hardest time were the politicians who had spent so much time trumpeting the power and prominence of the United States in the world. “God Bless America” had become the unofficial national anthem, and was used to pump up the crowds when realistic solutions to the nation’s problems seemed too difficult for these men and some women of leisure to work on. As long as there was war going on, they didn’t need to tackle the need for health care, better schools, responses to global warming and the like. They could cozy up to the lobbyists, get their fat checks, and basically do little to nothing to really improve life. The politicians had it made, and this change of the nation’s mind was hard for them to adjust to. Some didn’t, and were heard long after they had been voted out of office, mumbling “but I love my country” as they shuffled down the halls of the special politician respite care facilities that had been hastily constructed after so many of them basically had emotional breakdowns.

What turned the tide is that the regular folks, who were suffering under the neglect of their elected officials and abuse by their corporate leaders, finally got fed up. Historians debate what actual “tipping point was” but most agreed it came as a result of the confluence of several events that occurred near the end of 2009. President Obama decided to send more troops to the war in Afghanistan, a war that was killing more and more US soldiers each day, and making the Afghan people less secure than when the soldiers arrived. Bankers were touting that the recession of 2008 was over and giving each other huge bonuses, while one in 10 people were out of work, and one in eight lived in dire poverty. The president’s efforts to pass a comprehensive health care bill got mired down in political name-calling. Small businesses struggled to make ends meet. Young people, especially those just out of college found it difficult to start their careers. People everywhere just got tired of the lies, the hypocrisy and frankly, the bullshit coming out of their leaders.

So they hit the streets. They wrote letters. They walked into corporate headquarters and protested at bankers meetings. They marched on Wall Street, on Pennsylvania Ave, and on major streets in cities and towns throughout the country. They started emailing and texting their friends and family, and things began to shift. For a long time life in the US was chaotic. At times the police and the National Guard had to be called out to calm folks down. But then the police and guardsmen began deserting, not wanting to quell a movement that they themselves were in agreement with. There were reports in San Francisco, Philadelphia and Houston that police officers actually put down their guns and joined the marchers. There was even a governor’s wife in Minnesota who led a protest on her husband’s office at the capital. It was crazy, scary and exciting time.

After it was clear that Obama’s decision to send in more troops was wrong-headed, he reversed himself and the war in Afghanistan was terminated. The president ordered out most of the troops and instead sent teams of teachers, doctors, social workers, business consultants, community developers and engineers into the country to help rebuild what the soldiers had destroyed. Halliburton, Boeing and some of the other huge military contract companies began to shift focus and started building supply ships, and cargo planes to take seeds and tools to the impoverished parts to the world. Over a period of several years the World Bank experienced a complete change of leadership, and the new folks in charge started using words like “sustainability”, “eco-friendly” and “localized economies” rather than “growth”, “bottom line” and “globalization.” The change didn’t happen overnight, and for a long it seemed like nothing was happening, but as people looked back they realized the shift started when people got fed up.

And then the Joint Chiefs of Staff, the heads of the nation’s military branches, who had build their careers and professional identities on the need to conduct war, made an admission that shocked the nation. They asked for and received a prime time slot on national television. One by one these military leaders shared in graphic and often painful detail what war was really like. Each one shared his personal horror story of war, and then together they confessed their angst for sending men and women into the face of certain death for causes that rarely were clear and objectives that were never worthy. They talked about the lies and propaganda that were manufactured to justify their actions, and they asked for the nation’s forgiveness. They announced that they, the warrior heroes of the nation, were giving up their stations as military commanders, and were going to live more wholesome, productive lives.

Shortly after that, the recruiting stations closed. Because there were fewer soldiers, as time went on there was less need for veterans services. So little by little VA hospitals and other programs began to close simply because they were not needed. Then, one day in the spring the President announced that the next November 11 would be the last Veteran’s Day, simply because there were no more veterans.

Today was that day. The last veteran closed the door to the VFW hall, and smiled wryly. His granddaughter ran up and grabbed his hand as they walked together toward his car. He said to her “Want some ice cream?”

“Can I have chocolate cherry cheesecake with whip cream?”

He smiled “You can have anything you want. It’s a good day!”