The Great Divorce ( Books That Shaped Me #6) 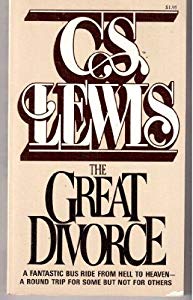 When I became a Christian at the age of 17, in the vernacular of my evangelical youth group, I “committed my life to Jesus Christ.” Almost immediately my youth group leader urged me to read my Bible every day, keep a journal of my thoughts and reflections on what I was reading, and read the book Mere Christianity by C.S. Lewis. For many young people of my era who became Christians Mere Christianity was an early step along the way to becoming a thinking, educated Christian.

Mere Christianity was originally a series of lectures Lewis gave in 1943 on BBC radio to the people of England, which were then published in 1952 into the book we now have. Lewis, a highly acclaimed British academic, came to faith in midlife after long discussions with other academics who happened to be Christian. He had been convinced of the reasonableness of the Christian faith. Thus the lectures that became the book Mere Christianity essentially made a rational case first for a belief in God and then secondly for a belief in the reality and reasonableness of the Christian message. Even today among certain segments of Christianity Lewis’ thoughtful reflections are highly regarded. Frankly, I found them rather boring and dry.

However, I learned that in addition to writing academic articles in his discipline of English Literature, and books on Christian thought, C.S. Lewis wrote fantasies all with a sort of Christian undertones, some more obvious than others. Many fantasy buffs know Lewis for his six-volume Narnia series and his Space Trilogy. I did not discover those until much later 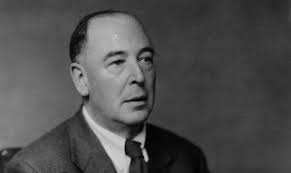 But one of the fantasies with a Christian message I did discover was The Screwtape Letters, a supposed series of letters between the senior devil, Screwtape, and his incompetent nephew, Wormwood. Wormwood has been sent to try and lure Christians from their adherence to Jesus but keeps failing at this task, and so looks to his uncle for advice. In the correspondence Screwtape highlights all the ways Christians can move from an authentic living faith in Christ, to a more cultural Christianity devoid of any sacrifice or commitment on the part of the supposed believer. One does not have to believe in demons or the devil to see how Lewis describes what it means to be an authentic Christian and how easily supposed Christians lose their way to materialism, self-righteousness, and other temptations.

I enjoyed The Screwtape Letters (which has actually been made into a play) and so went looking for another Lewis book like it, and came upon The Great Divorce. Written in the first person, the book opens with a group of people boarding a bus. Some are eager to get on the bus, others are not so sure, others are downright resistant, but eventually, they all get on. The narrator talks with folks with all sorts of folks on the bus and finds a wide range of reasons they have taken this trip. Eventually, the bus arrives at its destination. To left is a gray and formless wasteland inhabited by bodyless ghosts; to the right is a steep mountain. Passengers are granted a choice on which side to go, and most choose the mountain. The mountain, though steep, has some substance to it; by contrast the wasteland is vaporous.

As the people climb the mountain, they find that their bodies are getting more solid, what the narrator describes as “becoming more real.” However, the extra weight makes climbing the mountain even more difficult and many turn back, choosing the wasteland over the difficult climb up the mountain. Others find that “becoming real” involves facing instances and events in their lives where they have done something for which they must repent before moving on. Many turn back on that account. Others find out becoming real means facing parts of themselves they would rather deny; some of these also turn around. But eventually some of the travelers do reach the top, and they are not at all the so-called respectable folks who were used to hiding behind their wealth, prestige and presumption. Many are those that the society had denigrated as nobodies and yet they made the trek. These ones have become fully real.

In the midst of this story, the reader realizes that Lewis in a metaphorical way is describing the journey of the afterlife, to heaven or hell. Hell is not a place of torment, but rather a place of nothingness, whereas heaven does not consist of streets paved with gold but “real” people who have faced up and dealt with the realities of their lives, be they good or bad.

I was not particularly concerned about the afterlife at the age of 20 when I read this book, nor am overly concerned now at nearly 66. Whether we are talking about Lewis’ vision of heaven or that of the book of Revelation or the image of the movie All That Jazz with an adoring crowd cheering as Roy Scheider departs to his death into the loving arms of Jessica Lange, all of these images are attempts to give people a glimpse of something we cannot know, nor possibly fathom. I figure if there is a heaven, I will know when I get there, and if not, I won’t have wasted my energy.

What struck me about The Great Divorce was its picture of the life of faith as a matter of becoming more real with oneself, the people around one, and the world at large. What I took from this book is that the role of spirituality in our lives (regardless of our religious persuasion) is to help us get in touch with a what theologian Paul Tillich called our “Ground of Being” and then to build our lives from there.

These are some of the qualities I have come to see are the elements that help a person become real. By no means have I come close to living up to the full potential of these and the other character traits that make for a fuller life. In fact just like the journey up the mountain to heaven, the process of becoming real takes a lifetime, and if there is an afterlife, perhaps beyond this life into the next.

At the time I read this book I was trying to figure out who I was, where I was headed, and what I was going to be doing with my life. The Great Divorce did not answer those questions, but instead gave me a picture of what it means to be a person of authentic faith – to be real. Sadly, today too many religious people, particularly in our North American culture live out a faith characterized by self-righteousness, materialism, intolerance, judgementalism, elitism, and exclusivity all wrapped up in obvious phoniness. But the vision The Great Divorce gave me was something quite different to strive for. I  still want to become real and so I climb the mountain in hopes of someday achieving that destination.