What do we do with a President who seems bent on destruction – his own and the nation he supposedly leads. Why do I say this?

(Just as I went to publish this blog, as a whistleblower reported the President’s possibly Illicit conversation with the President of Ukraine about Joe Biden, and the Secretary of Education’ has threatened to withdraw funding from a Middle East Studies program at Duke and UNC for being too positive about Islam… it just goes on and on.)

And this in just the last few months; one can’t keep up with all the heinous things he says and does. His desire to cut SNAP benefits and Medicaid from the poor, the reduction of public housing for the homeless, and apparent chummy relationships with dictators like Putin, Kim Jung Un, and Brazilian President Bolsinaro. There is something highly destructive, even sinister, in the White House that calls for a deeper analysis. Democratic presidential hopeful Marianne Williamson, in July referred to the Trump Administration as a “dark psychic force.” That statement rang true to many in the audience.

People of the Lie

In 1983 renowned psychiatrist and author M. Scott Peck published People of the Lie: The Hope for Healing Human Evil. In this book Peck explores the phenomenon of Evil, suggesting that Evil become a diagnostic category much like bipolar disorder, depression or schizophrenia.  He then goes onto describe a person with this diagnosis of Evil. While the American Psychological Association did not take Peck up on his suggestion, his description of what constitutes an “evil” person is compelling.  He distinguishes between the person who does bad things (i.e. sins) from the person who is evil. All people sin and make mistakes, even really harmful things. But an evil person takes those sins to a deeper, more disturbing level. 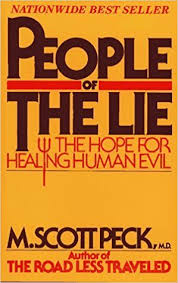 Here is a sampling of quotes from Peck’s 1983 book (long before Donald Trump ever thought about becoming president). Their relevance is compelling and chilling (italics mine).

What Dr. Peck describes is a highly self-centered person with little to no capacity for self-reflection, and little desire to look inward. They show little capacity for empathy. They are outwardly focused, obsessed with preserving a certain public image at almost any cost. They do not admit to mistakes, even trivial ones, because maintaining their image of intellectual and moral perfection is paramount. All the while they create confusion and suffering all around them.

Peck concludes by describing Evil as a personality disorder with the following characteristics:

When I look at the way President Trump has been operating especially in recent months, and when I look at the characteristics Peck attributed to evil nearly 40 years ago, I am struck by the parallels. Except for the tendency for evil people act subtlety (Trump is not subtle at all), #45 exhibits all the signs of what Peck described as a person with an Evil personality disorder.

Now to a significant percentage of the population – 40% if polls are accurate – my suggestion that Trump suffers from the Evil personality disorder is heresy. These people believe #45 is their God appointed messenger. After a Trump rally in Pennsylvania back in July, two sisters, both evangelical Christians told a reporter Trump was their “chosen leader” and linked his presidency to the Second Coming of Christ. The Netflix mini-series “The Family” describes how top religious and political leaders have proclaimed as much about #45. To these folks my words are anathema, but to me the blindness of these supposedly God fearing people to the vicious, violent, hateful words and actions of #45 must be called out.

I don’t expect to convince Trump’s true believers, but those of us less attached to the president, must realize that we are dealing with a spiritual and moral crisis of profound dimensions. While investigations, impeachment inquiries, and candidate debates are fine, they only scratch the surface of what we are dealing with. Trump has shown he has little respect for constitutional, legal or political precedents when they are used to hold him accountable. He has surrounded himself with minions who will do his bidding no matter who has to be walked on. And he is relentless.

Here is a prediction: On November 3, 2020 there will be a presidential election. On November 4 there will be a constitutional crisis. If Trump wins, he will seek to centralize his power to the point of becoming a virtual dictator. If he loses, he will refuse to step down. He will employ numerous lawyers to challenge the election results, and he will use whatever power he has to hamstring the next president. He may be forced to leave; I predict he won’t go easily or quietly no matter how the election goes down.

Responding to the Evil Person

Dr. Peck points out that the natural response to an evil person is to hate them and destroy them. But he bids us to see the evil person in a more compassionate and human light. 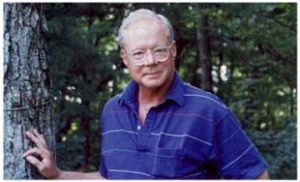 “Think of the psychic energy required for the continued maintenance of the pretense so characteristic of evil! They perhaps direct as much energy into their devious rationalizations and destructive compensations as the healthiest do into loving behavior. Why? What possesses them, drives them? Basically it is fear.”

The evil person’s basic defect: that he deceives himself as he seeks to deceive others. And he is afraid. Peck suggests: “The designation of evil as a disease also obligates us to approach the evil with compassion.” Now I will be the first one to admit compassion for #45 is something difficult for me to conjure up. But Peck’s right, and he got this notion from the great religious traditions.

The Apostle Paul says: Do not be overcome by evil; overcome evil with good.” Those of us who stand up for the undocumented, the poor, the incarcerated, the homeless, the excluded, the deported, the climate and much more must keep doing our good. We must resist the destructive policies coming out of Washington in whatever ways we can with peacefulness and respect for the dignity of those who oppose us. We must seek to overcome Evil with Good. And then we must call upon our Higher Power, be it God, Allah, Yahweh, the Universe, or some other name and seek the strength and wisdom to face the Evil in our time in whatever and whoever it manifests itself.