This is the fifth in a series of postings where I share some thoughts on how to talk with the whites in our families, workplaces, organizations and social networks about the difficult topic of race. I don’t claim to be an “expert” on the topic, but rather am one simply sharing what I have learned over the years. As such I hope that this and other postings can provide some helpful guidance and meaningful dialogue both on and offline.

In this entry I want to address what is one of the toughest challenges in talking with white folks about race: their tendency to turn any discussion or controversy about race into something else – a process I call White Deflection.

Trump and the NFL

Slightly over a week ago, at a political rally in Alabama, President Trump ignited a controversy that had faded in the public eye, when he called out Colin Kaepernick and other National Football League (NFL) players who used the national anthem as an opportunity to call attention to police violence against persons of color.  During the preseason to the 2016 season, Kaepernick began taking a knee during the anthem to protest police violence against people of color, and in so doing he became of lightning rod of controversy over this nonviolent act of resistance. While Kaepernick repeatedly emphasized his taking a knee was to call attention to police brutality, he was repeatedly criticized by fans, other players, owners, and the media for disrespecting the military.  Kaepernick sought to reiterate his reasons for kneeling, largely to no avail.  Since being released by the San Francisco 49ers at the end of last season, Kaepernick has not been able to find a team willing to even give him a tryout. This “blackballing” effort by NFL owners, caused several civil rights organizations and leaders to call for a boycott of the NFL season.  While other players, like The Philadelphia Eagles Malcolm Jenkins, have had their own protest such acts and the boycott had largely gone unnoticed except to those participating. 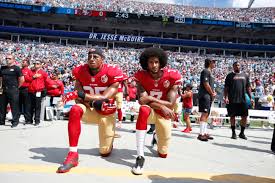 However, the president revived the issue when he suggested that NFL owners should fire any player who protested, only this time the charge was not disrespecting the military but was for disrespecting the flag.  In response, nearly every team took a knee, locked arms or stayed in the locker room in defiance of the President’s baseless and unwarranted attack. And by the way, the candidate on whose behalf he was speaking lost the primary election.

However, my focus in this blog is not the antics of #45, but the manner in which a simple, non-violent, silent protest by mostly African-American athletes became a controversy around the meaning of patriotism.

Much the same sort of reaction occurred in 2014, when a Twitter handle, #BlackLivesMatter, became a flashpoint of criticism by many white folks following the shooting of Ferguson, Missouri teenager Michael Brown by officer Darrin Wilson. In the weeks and months following the shooting of Michael Brown and the subsequent dismissal of any chargers against Officer Wilson, there were Black Lives Matter (BLM) marches all over the country and even across the world. While the marches were deeply emotionally, they were overwhelmingly peaceful, but political leaders and the media focused on the few unfortunate incidents where violence was used and some police officers were shot in Dallas, New York, Philadelphia and elsewhere. 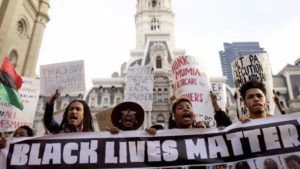 Critics of the emerging movement took issue with the phrase “Black Lives Matter,” insisting instead that “All Lives Matter” and “Blue Lives Matter.” Like in the case of Colin Kaepernick, these critics did not want to hear the explanation given by BLM’s leaders: that they were protesting unjustified police violence against persons of color and were affirming that Black lives mattered, because people of color had long suffered this kind of injustice (for decades before it recently came in the public view), and so wanted to say their lives mattered as much as anyone else. Critics turned it again into an issue of disrespect for government authority rather than a call to notice racial injustice.

Those of us who want to talk with our white friends about groups like BLM and protest actions like that of the NFL players, need to realize that what is going on is more than simple confusion. Rather, we need to recognize when issues of race are raised, there is often a subconscious, automatic response on the part of white people to try and reframe the issue into something other than race.  This white deflection is facilitated by what author and legal scholar Ian Haney Lopez calls “dog whistle politics.” Lopez explains that in its simplest form dog whistle language “simply means speaking in code [about race] to a target audience.” So, instead of acknowledging an athlete’s protest against police brutality against people of color, critics say the player is disrespecting the military, dishonoring the flag, and or being unpatriotic. When BLM activists march to protest a shooting of a black victim by a police officer, instead of holding accountable the officer whose actions are recorded on a smart phone or a dashcam, critics say that BLM is fomenting violence against police and disrespecting law and order.

This tendency to use coded language was perfectly illustrated by the president after African American players began to defy his call on owners to fire the players. He tried to clarify by stating: “This is not about race, it’s is about respecting the flag.” You see, without even thinking it through, “flag” became a deflection from what players saw as a racial protest. Lest we think this is a new phenomenon, Lopez provides numerous examples of how white leaders, politicians and the media have used this coded language for decades.  In fact, it is so prevalent, whites can instantly deflect the conversation away from race, and truly believe they are doing so in good conscience. 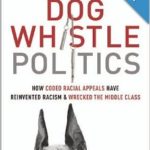 In trying to talk with white folks about issues like the Kaepernick controversy or Black Lives Matter, we must realize that we are contending not only with an individual who is afraid to acknowledge race and racism, but also with a white culture ill-equipped to address issues of inequality, unjust treatment, biased institutional practices, media images and much more that consistently degrade and undermine the ability of people of color to access the rights and privileges supposedly afforded all U.S. citizens.  All the NFL players and the BLM activists are seeking to do is exercise their Constitutional rights to free speech, and they are not asking for permission, because they assume that such rights belong to them as much as they do to every white citizen. Yet, the common reaction of many white folks to these actions reveals that they really don’t believe people of color should have those rights or choose to exercise them in ways that might make white folks examine the issues and/or feel uncomfortable.

Some Suggestions for Challenging White Deflection

So, in talking with these white folks, we need to realize we are up against a huge mountain of culturally reinforced bias, and while we wish we could come in with a rhetorical wrecking ball and destroy the mountain in one blow, in reality what we need to do is chip away at it persistently.

First, we must not allow ourselves to be dragged into arguments about the flag, the military or patriotism because that is not the issue; the issue is the unjust treatment of people of color. We need to not only be informed, but also stand firm, realizing that our white friends and family will often deflect to other issues. 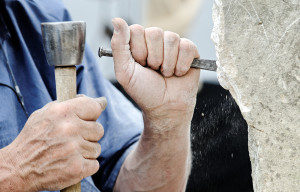 Second, we must realize that for many white folks the kinds of stories routinely shared by people of color in their interactions with law enforcement are totally outside the white experience. We need to know some of those stories, to share with them. For instance, I often share the story of colleague who was stopped by police for a broken taillight and spent three days in jail because he respectfully questioned the officer’s harsh treatment. We must stress that we are not making this stuff up – these events are common for people of color, not the exception.

Third, we need to try and help white folks put themselves in the shoes of people of color. When talking about race with a group of whites, I will sometimes ask: How many of you have had “the talk” when you were kids? A few hands will go up and when I ask what the talk was about, they usually share that it had something to do with sex. Then I explain that “the talk” for people of color is much different. For people of color, the talk is usually strong advice on how to act when stopped or questioned by a police officer, so that the child won’t be imprisoned or shot. I ask, what would it be like for us white folks if (1) we had to assume we were going to be routinely stopped by law enforcement and (2) that such incidents could be life threatening. I challenge them to put themselves in the shoes of the Black parent or the Latino child. I encourage them to ask a co-worker or friend of color about “the talk” and see what they say. I try to get them to put themselves in the shoes of the other.

Finally, we need to realize this is a long struggle because this tendency toward white deflection is so deeply ingrained that it is hard for whites to recognize, admit, and remove without deliberate intent and effort.  Honesty compels those of us who aspire to be white allies that even WE find ourselves deflecting. So, whether it is in our own psyches or in our relationships, we need to commit ourselves to chip away at this mountain of unconscious cultural racism stone by stone.

In the end, we must accept that for many white folks race is a deeply uncomfortable subject, so uncomfortable they have developed culturally acceptable ways to avoid the topic altogether. However, if we want to be allies to our friends and colleagues of color, we must not allow the topic of race to be hijacked and redirected through the process of White Deflection. We must encourage, invite and even cajole our white friends and colleagues to face the reality people of color face every day in our society.

NOTE: To learn more about how to address these issues, check out the MA in Urban Studies program, where a whole course is dedicated to these kinds of issues