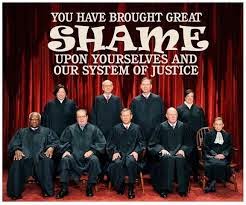 During the Civil Rights Movement, the court system, particularly the Supreme Court was regarded as the one branch of government that could largely be counted on to protect the rights of African-Americans when Congress and the Executive Branch were stymied by political concerns. Because of the Supreme Court schools were desegregated and basic rights were affirmed, even when lower courts at the municipal and state level ignored or shirked their responsibilities.
However, yesterday to its shame the Supreme Court affirmed and expanded the rights of wealthy individuals to unfairly influence the political system by removing all limits on the amount of money people can contribute to political campaigns. (Link to article here)  This follows the ”Citizens United” decision of 2010 , which deemed corporations to be legally considered “persons,” who then could contribute in an unrestricted way to political campaigns.  A political system that already was bought and sold to the highest bidder, now just came even more deeply entrenched in a system where the wealthy and the powerful get access that the rest of us do not.
For the last two weeks the Philadelphia Inquirer has run a special report focusing on an investigation of five local state legislators who were caught on tape receiving money or gifts from a paid informant. The value of the money or gifts was in the thousands of dollars. While I think that such actions should be brought to light, the irony was that the problem was not that they received these money and gifts; it was that they did not report them. That is, it’s okay for legislators to receive money as long as they make it known. In Sunday’s (March 30) paper just below the latest installment on this case, there was an article describing how in 2013 Comcast, one of Philadelphia’s largest employers, spent $18.8 million lobbying for its interests, and employing 107 lobbyists to do their bidding. Comcast was listed as only the seventh largest lobbying spender in the country, the largest being the U.S. Chamber of Commerce which spent $74.5 million on lobbying in 2013. This was all perfectly legal and does not include campaign contributions.( See article here)
What is wrong with this picture? A few small time politicians take some small change and get smeared, but large corporations and wealthy individuals get to make their case in exchange for gifts and money. Now the Supreme Court has essentially blessed this process and said the sky is the limit.
We need to recognize that whatever we want to call our form of government, it is not democracy. Democracy by definition is a system that is rooted in the community and gives all persons, regardless of rank, wealth, or position, an equal voice in government. One way to view our history as a nation is to see it as a struggle to make the dream of democracy a reality for all: people of color, women, various racial/ethnic groups, the poor, and now undocumented immigrants. The slogan “One person, one vote” is the bedrock of democracy; all get a voice and no voice is of greater inherent value than another. If we are to reclaim our democracy, it must start by denouncing the lie that wealth gives one the right to greater influence, and by working to strengthen local communities and if necessary take to the streets to reject such efforts.
In Philadelphia, the interfaith network POWER is working with local unions and the City Council to pass a referendum on May 20 that would ensure that any company doing business with the city would pay its employees and subcontractors 1 ½ times the minimum wage, which at this time would mean the wage would be $10.88/hr. Fast food workers across the country have been advocating for a similar provision in their contracts.  The Immokalee Workers in Florida have been advocated for similar treatment among farmworkers. Already the corporations have pressed hard for such efforts to fail, threatening to cut jobs while fearing that their profits might not be as great. Ironically despite their rhetoric about jobs and profits they seem to have the money to put pressure on politicians. (Hmmm – ironic isn’t it?) What communities have is people. We are engaged in a war, and the issue of a living wage is only one battle in that war.
The Supreme Court’s decision has made clear that the government is up for sale. Those who believe in true democracy, and not the plutocracy we now call our government, must act with equal or even greater force.