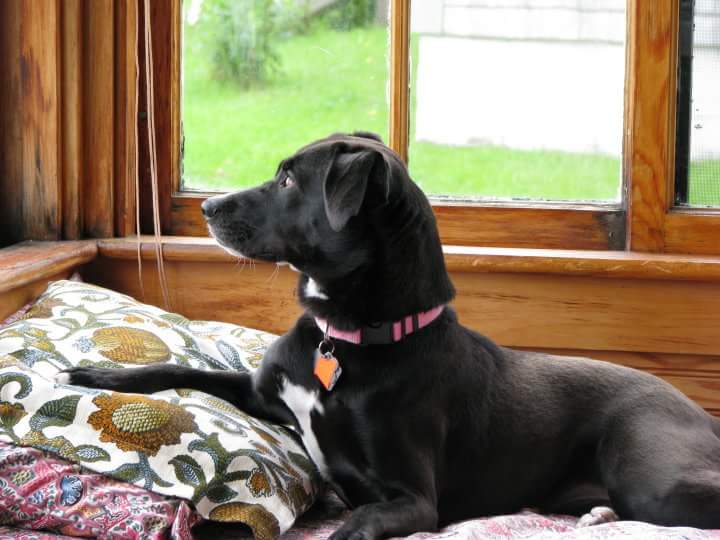 This past Friday, October 21, Sadie, our 8 ½ year old dog was put to rest.  Earlier that week we had learned that she had inoperable cancer in her excretory region and at best she had about six months to live.  From the time we got Sadie from the animal shelter, until about six months ago, her tail was always wagging.  She seemed like a constantly and consistent happy dog, because her tail never stop moving …  until Earlier this year.  We notice that her tail was now down and often between her legs.  We wondered if she was depressed, but it soon became clear that there was pain somewhere in her back side.  So, we took her to the vet; he thought she might have had a fall, and bruised a bone or muscle.  However over time, the pain did not subside; it seemed to get worse.   Then the vet thought she might have early arthritis in her lower spine or in her tail, but the pain seemed just get worse to the point she whimpered in pain when she went to the bathroom.  Eventually, earlier this week we took her to a specialist who ran several scans and tests on her and took a biopsy.  The verdict was cancer, and the prognosis was she had at best six months to live.  Though she seemed to have lots energy, ate well, and otherwise had no signs of sickens, there was sadness or pain in her eyes.  She knew. 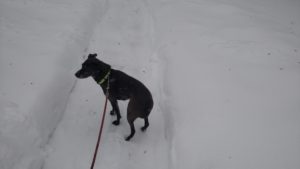 We considered keeping her on pain meds, but the meds made her sick and so painful as it was, we decided to euthanize her. The day I took her to the vet was surreal. Earlier in the day she out in our backyard running around and sniffing the plants like she always did.  When I put her in the car she jumped right in, like we were just going for another ride.  I opened the window enough so she could stick her nose out as she loved to do.  As we sat in the waiting room, she was sniffing all around, jumped in my lap.   A lady with two smaller dogs came by to pet her and she licked her in the face.  Just another day in paradise for her.

Then came our turn to go in.  I talked briefly with the vet (not our normal vet), and she agreed that putting her down was probably the best option; everything else was simply delaying the inevitable.  So, they gave her sedative to relax her.  Then she was given another injection and in a matter of seconds, she was gone. She looked so calm, so peaceful, like the hundreds of times I found her sleeping on our bed or in a chair, but she was gone.

Sadie was a gift to Cynthia from my daughters shortly after Phoebe, our youngest, went off to college.  The girls wanted to give her a companion, someone she could walk with.  Cynthia picked her up at a shelter, when she was about six months old.  Officially she was a Beagadore – a Labrador-Beagle mix. However, her unwillingness to come when called and her constant energy made us wonder if she also had some Jack Russell in her.  When people asked what kind of dog she was, I would just say she was a mutt; we never really knew what she was. 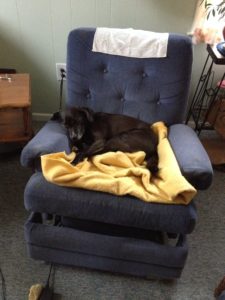 While Sadie and I got along great, she was Cynthia’s dog.  Often I would find Cynthia in her chair reading or watching TV, and there was Sadie in her lap or at her feet.  When Cynthia would lie down for a nap, Sadie was usually there right at her feet.  In the morning, Sadie would often come into the room, jump up on the bed and wait patiently until Cynthia got up.  Every morning Cynthia and Sadie took a walk, and through that got to know many of our neighbors, who also were out walking their dogs. In the evenings after dinner, the three of us usually took a walk around our circle, and it was a time we all looked forward to.  I learned that a great way to meet people wherever you were was to walk your dog; Sadie was our great introducer.

As pets go Sadie was not the most obedient.  She never came when she was called.  When she had the chance, she would bolt out the front door and when you called, she thought it was game and ran the other direction.  Sometimes she would be gone for up to two hours, simply running through the neighborhood or in the woods behind our house, chasing rabbits and squirrels, or sniffing her way through. She loved to run; when she would get out or we would put her out in the backyard, she would just race back and forth.  When I was walking her, I would sometimes go into a jog, and she was a great pacer. 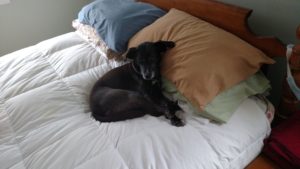 In some basic ways, she was our instructor too.  The other night Cynthia recounted all the things she showed us.

Our house now feels a little empty. She was only with us for 8 ½ years; we had expected many more. Her bright smile will not great us at the door. Her soft body won’t rub up against us. We have decided to still take our evening walks, if only to remember her. Somewhere she is probably chasing squirrels, barking at other dogs and licking faces.  Just not her.  Dear Sadie, we miss you, rest in peace. 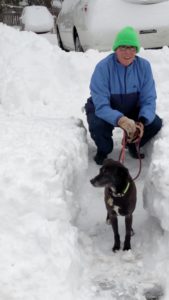