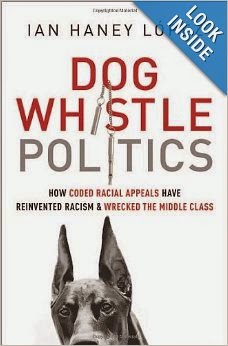 When I heard Bill Moyers’ two part interview with Ian Haney Lopez, I knew intuitively that what he was saying was true. This book by Lopez not only confirmed that intuition but added depth and detail to my understanding of the way racism has become endemic to politics in the U.S. Simply put, Lopez’s thesis is that since the early 1960’s conservative politicians in the Republican party and the Southern wing of the Democratic party (when Democrats had a majority in the South) have used racial code words and images to invoke race-based fear and tension in White voters to garner votes. In response liberals (largely Democrats) have shied away from talking specifically about race for fear of alienating white voters, and instead have adopted the language of post-racialism, which says we seek “universal” solutions to the nation’s problems rather than race-targeted solutions (such as Affirmative Action).

Beginning with the 1964 presidential election campaign of Barry Goldwater going thru the current presidency of Barack Obama, Lopez documents in detail how “dog whistle politics” (talking about race without mentioning the word) has been used by both parties. Harking back to the words of his Harvard Law professor and originator of Critical Race Theory, Derrick Bell, Lopez shows that while racism is a permanent fixture in American life it has evolved and changed, and the ways of addressing racism must also change. The tactics of the 1950’s and 60’s largely do not work today, so that addressing racism today must take into account the commitment to colorblindness and post-racialism at work in the Republican and Democratic parties respectively. Lopez concludes the book with a number of suggestions for politicians, foundations, unions, civil rights organizations, educators and ordinary citizens to talk about race openly and demonstrate how the use of dog whistle politics not only injures people of color, but also a large majority of middle class and low income whites.

My one concern and criticism of the book is that Lopez clearly sees the path to racial justice running through a return to the liberal policies of FDR’s New Deal. His criticism of liberals is not just that they have avoided talking about race, but also that they aren’t liberal enough. However, Lopez has romanticized the FDR/New Deal era and seems to have overlooked that many of FDR’s reforms excluded blacks initially and only when A. Philip Randolph called for a March on Washington in 1941 (an idea that never died and was resurrected in the famous 1963 March at which MLK gave his famous Dream speech), that FDR relented and began opening up opportunities for blacks. Haney assumes that the white liberal is the friend of the person of color, but history does not support that assumption. What is needed is a far more radical solution than a return to liberalism. Many of his suggestions will move the country in the right direction, but unless race-based policies (such as the way public schools are funded) are not completely overhauled, the structural inequities that plague the US will only morph and change some more.

The other thing I wished he had addressed, but perhaps this is the responsibility of others, is the way in which white progressives can be allies in the efforts to uncover and undermine dog whistle racism. Lopez shows how “common sense racism” operates in many all white settings, but leaves unanswered how whites committed to anti-racism, can respond to and counter the self-defeating and racially tinged assumptions that lead many whites to vote for policies that would greatly benefit them, while also helping people of color.

That being said, Lopez has provided us with a new window in which to look at the nature of racism in our society. Like Alexander’s The New Jim Crow, Dog Whistle Politics is a must read for anyone wanting to understand and then dismantle the racist practices and policies at work in our society today.