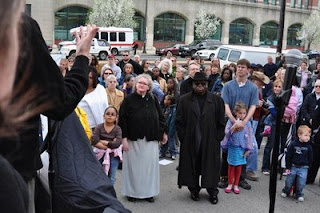 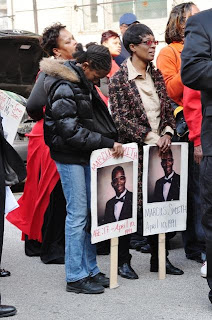 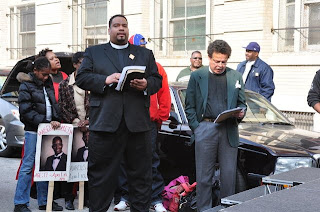 On Good Friday, April 10, about 100 people gathered near Colismo’s Gun shop to commemorate the death of Jesus, and its connection to the countless meaningless deaths due to gun violence. Folks from all walks of life gathered to say that illegal guns and the straw purchasing that lets these guns onto the street needed to end. Several local preachers spoke, as well as two mothers who had lost their sons to gun violence. We were led in songs that spoke of hope. We prayed for the those who had died due to gun violence in the previous year by name. We were called to commitment and action to end this scourge. James Colisimo, the gun shop owner who had refused to sign the code of conduct that wold allow him to more readily identify straw buyers in his shop was called out by name to act. The shroud that hung on the cross was laid on a enlarged gun and coffin, saying death to the means of destruction not to more victims. We ended the service by marching in front of the gun shop, singing “Lord, Listen to your children praying”, an enlarged version of the code of conduct being held in front of us. Four police officers stood in front of the shop, “protecting” Mr. Colismo from this spiritual onslaught.

Altogether it was an inspiring gathering, a sign of hope that the violence can end. This gathering had a feel and a color that was more diverse, and included not just concerned white folks like me (personally distant from the violence) and folks who were and have been on the front lines of this struggle for a long time. However, the presence of the mothers reminded me of (1) the struggle is a long one (these mothers had been speaking out since the early 1990’s); and (2) the pain and suffering of those who have lost loved ones or been maimed by guns is also long. However, my prayer is that they found comfort and felt the hope I felt in that gathering.

On Good Friday, we stand in the face of Death, to anticipate Death’s defeat. As the speaker that day, Bishop NewKirk of Harold O.Davis Memorial Baptist Church, said, just because guns are legal, when young people die needlessly, they are not moral. Like slavery, like the Native American Genocide, like the Japanese-American internment during WW II, selling guns to straw buyers is “legal” but not “moral.” The instruments of death, by some twisted NRA, Second Amendment logic, are legal, but in this age when gun men kill 13 people in a Binghamton Immigration center, and 3 police officers in Pittsburgh, and 318 people in one year in Philadelphia; those guns may be legal, but they are not moral.

I believe the laws in PA will be changed to limit the sale of handguns to straw buyers – its only a matter of alot of effort and time. I believe the NRA can be revealed for the fraudulent front for the gun manufacturers that it is. I believe that gun dealers like Colismo’s, that will not be accountable for their business will be exposed and disgraced. Hope is on the rise. Death will be defeated. This was the feeling and message with which I left the service that day. Indeed, there was hope of resurrection on Spring Garden St on Good Friday!

(Many thanks to Kemah Washington for his pictures of that day!)