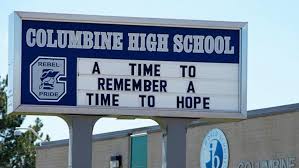 I boarded a plan to Littleton, CO just two days after 17 people were killed and many others wounded at Marjory Stoneham Douglas High School in Parkland, Florida, when former student Nikolas Cruz opened up his semi-automatic assault AR-15.  I was going to Littleton to celebrate the wedding of my niece. On Saturday afternoon I took a drive around Littleton and began to notice buildings and housing developments with the word “Columbine” in them: Columbine Heights, Columbine Rd, Columbine Church of Christ and so on. I began to wonder: is there were Columbine High School is located too? A quick Google search confirmed that this indeed was the home of Columbine High School, where on April 20, 1999, 13 people – 12 students and one teacher – were killed by two students in masks, the same Columbine that raised our national awareness on gun violence and issued us into the era of mass school shootings. According to one source, there have been 208 school shootings since that tragic April day – Parkland being the latest.

Sensing the irony or serendipity of my being in Littleton in the aftermath of Parkland, I drove to Columbine High School to take a look. Littleton, CO* is a city of 41,000 people, mostly white with 12% identifying as Hispanic. It looks like a planned community with numerous housing and townhouse developments connected by a network of bike and walking paths. It lies at the foothills of the Rocky Mountains and on that day the snowy mountain white caps were clearly visible.  In a way, it reminded of the made-for-Hollywood town depicted in the film “The Truman Show” starring Jim Carey. This idyllic town was the site of one of the country’s most tragic events in recent history- an event the shocked the nation 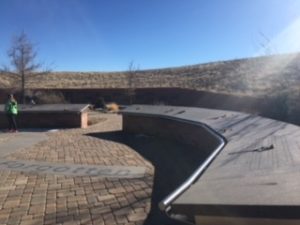 These days Columbine High School looks like a fairly normal suburban high school surrounding by athletic fields and a city park. On the day I visited there was a youth basketball event going on, so the parking lot was full.  I parked my car and started walking around the outside of the school. About a quarter mile behind the school I saw a sign indicating there was a memorial to those who lost their lives. So I took a path up the hill.

The monument consists of two semi-circles. The inner circle contains a memorial to each of the dead with words about the person by surviving loved ones. The outer circle contains words from survivors. Even though this monument had been erected nearly 19 years ago, it was well maintained, and fresh flowers had placed by the names of the deceased. There were about 10 people when I arrived, including two young people who appeared to be brother and sister maybe 14 or 15 years old. Everyone was quiet and the mood was solemn.

I read some of the plaques

“This Wall of Healing is dedicated to those who were injured at Columbine High School and to all who were touched by the tragic events of April 20, 1999.”

There many words speaking of faith in and strength from God thru the trauma of that day, one plaque read:

“Those of us who are people of faith in this community turned to God, found that God was there and found he wasn’t silent.”

But the one that cut me to the heart in light of the shooting in Parkland read:

“It brought the nation to its knees, but now that we’ve gotten back up how have things changed, what have we learned?” 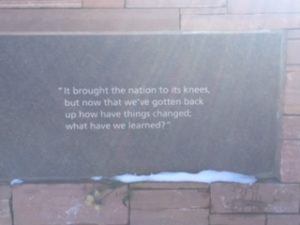 Two hundred and seven shootings later, not to mention other countless deaths in movie theaters, Las Vegas malls, shopping centers and other public spaces, it appears that our national intransigence and addiction to guns must lead us to admit that we have learned very little.

On April 20 this year students of Parkland and around the country are calling for a national school walkout and march on Washington to demand changes on current gun laws. Hopefully, this can be a start for a concerted effort to challenge and change the way guns are sold and registered in this country. However, because gun laws are largely regulated at the state level, true change will require similar actions in states across the country.

When #45 spoke up in response to the tragedy in Parkland, he talked about providing more help for those who struggle with mental illness, but when asked about gun laws, he remained silent. The true mental health issue here is the delusional thinking of gun rights advocates under the leadership fo the NRA, and the continued denial of the need for this country to pass sensible gun legislation that limits the availability of not only high powered weapons such as was used in Parkland and Las Vegas, but of handguns legally purchased thru straw purchasers who then spread illegal guns throughout our communities. The true mental illness is the tired excuses given by legislators (whose coffers are well financed by the NRA) why common sense laws cannot be enacted.

My trip to Columbine High School and its memorial was a sobering and sad moment. I have little faith in legislators pulling their heads out of the sand, but I do have hope that thru consistent action, we can begin to move away from the insanity that afflicted both Columbine and Parkland and all the victims and their loved ones in between. 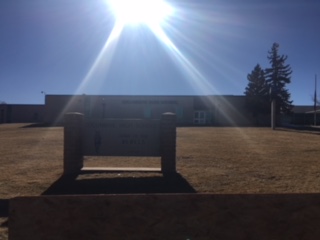