Now Thank We All Our God

Nearly 40 years ago when I was at college spending Thanksgiving away from home; as a result I was feeling alone and lost. To cheer myself up I began writing down the things in my life I had to be thankful for. Before I was done I had filled two whole sheets of 8 ½ by 11 inch paper listing people, events and happenings in the world for which I was thankful. Not only did that list lift my spirits, but it showed me just how easily I had overlooked all the things in my life for which I could be grateful. Ever since then that simple exercise has been my personal Thanksgiving ritual.  Every year around Thanksgiving I sit down and make a list of all the people, events, and happenings in my life and world for which I am thankful, and every year I fill pages with my list. Every year I am reminded how blessed I really am. No matter how many struggles and disappointments I have had to endure, no matter how much I may have struggled with failure, no matter how many mistakes I have made,  and no matter how angry and disappointed I am by events going on in the world, I have never failed to compile a lengthy list of blessings. The list doesn’t erase the disappointments; it just puts them in perspective.

Around the same time I started this personal ritual, I learned the story of Martin Rinckart, the person who gave us the words to the Thanksgiving Hymn, “Now Thank We All Our God”. The hymn begins:

Now thank we all our God, with hearts and hands and voices
Who wondrous things hath made in whom our world rejoices
Who from our mother’s arms hath blessed us on our way
Through countless gifts of love and still is ours today

Given these high and lofty words one might think that Rinckart had a  reasonably cushy life. Most people don’t feel they have been blessed with “countless gifts of love” or see “wondrous things” in their lives. This sort of language doesn’t come easily to most people; it certainly doesn’t come easy to me. So it was a great surprise to learn that in contrast to the picture these words might conjure up for us, Martin Rinckart had anything but an easy life.
Martin Rinckart served as a Lutheran pastor in the little town of Eilenburg, Germany in the 1600’s during the Thirty Years War. Not only did the residents of his little town suffer the privations and ravages of war, they were also beset by an epidemic that killed people by the hundreds. When Rinckart began his pastorate in Eilenburg in 1623, there were three other pastors in the town. As the town was ravaged by invaders, and beset with disease, one of those pastors left for a safer place, while the other two were felled by the fever. Rinckart was left to serve as pastor to the whole town. At the height of the crisis it was estimated that Rinckart performed on average 40-50 funerals a day, nearly 4000 by one person’s count. The burden of sadness and concern he carried was unbearable by human standards.
If anyone had reason to lose faith, he did. Yet he continued to serve, and through the suffering he and  those around him were able to see the grace of God in their lives and give thanks in the midst of their struggle. He was not immune or blind to the suffering around him. Rather he saw his life from the perspective of a God who suffered with him and did not leave or desert him. Thus the hymn asserts:
O may this bounteous God through all our life be near us,
With ever joyful hearts and blessed peace to cheer us;
And keep us in his grace, and guide us when perplexed,
And free us from all ills in this world and the next.
I teach courses on poverty, racism and social justice, and spend alot of time working on issues such as gun violence and educational equity. I find myself having to contend with unjust systems, uncaring legislators, and bruised and defeated individuals. The frustration and suffering I experience is nothing compared to what Martin Rinckart faced. Even so I find strength and inspiration in his overarching attitude of thankfulness in the face of suffering. Thus, this Thanksgiving I sing and pray with him the words of his great hymn that ends with these words
All praise and thanks to God who reigns in highest heaven,
To Father and to Son the Spirit now be given:
The one eternal God, whom earth and heaven adore,
Whoever was, is now, and shall be evermore. 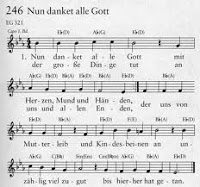 May you too find much for which you can be thankful on this Thanksgiving holiday.