Not So Fast Senator Toomey… 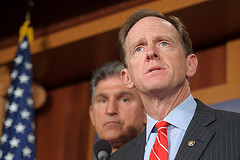 Conservative Republican Senator Pat Toomey (PA) went out on a political limb to co-sponsor a bill with Democratic Senator Joe Manchin (WV) that would have mandated background checks on all sales of firearms in the United States. This was an issue brought to light after the Newtown, CT shootings. Despite overwhelming popular support for the measure, Senator Toomey risked his 100 ranking with the NRA. Not only did the NRA not want the bill on universal background checks to pass, they didn’t even want it to be discussed on the Senate floor, threatening to “punish” those Senators who voted simply to talk about the issue. The NRA’s threats betray the gun lobby’s commitment to gun rights over people’s safety, and Senator Toomey is to be commended for going against his NRA supporters despite their threats. Toomey’s willingness to work with Manchin is the kind of political compromise and partnership that used to get things done in a divided Congress but is all too rare these days.
Unfortunately, while the country was rightly fixated on the horrific and tragic bombings in Boston, the Senate failed to pass an amendment instituting the Toomey-Manchin back ground check system.  While a majority – 56 to 45 – voted in favor of the amendment, a bill of this kind requires a  so-called “super majority” of 60 votes and so failed. This occurred despite nearly 90% public support for a bill and 70% support among gun owners. While many reasons were given for the bill’s failure, the bottom line is that the NRA is one of the wealthiest  lobbies on Capitol Hill, and money, not the the people’s will, rules our dysfunctional plutocratic government. [Don’t’ get me started!}
In his letter to his Pennsylvania  constituents Senator Toomey regretted the failure of the amendment to pass and reiterated his belief that the “amendment would have helped enhance public safety while still protecting the Second Amendment.” In describing the vote Toomey wrote “[The amendment’s failure to pass] was not the outcome I hoped for, but the Senate has spoken on the subject and now it’s time to move on.” [emphasis mine].
Not so fast Senator Toomey! Given the tremendous pressure Toomey received from his conservative base, one can understand his desire to put this firestorm behind him and “move on.” In fact if one’s goes to the Senator’s website there is no indication that he was ever involved with the legislation. However, some of us are not so easily swayed.  In fact despite the NRA’s harangue and pressure, a majority of the Senate actually did vote for the amendment.  More importantly an overwhelming majority of citizens are calling for background checks. The Senators and gun lobby are hoping we will just forget this issue and go away. Though Congress seems only able to act on what their political sugar- daddies  say they can act on, those of us who have been working for these common sense gun laws are not so easily defeated.
However, I do think tactics may have to change. The government seems beholden to corporate war chests and wealthy elites, so perhaps our tactics need to focus on those who are shelling out the dollars while hiding in the shadows. Perhaps several thousand gun violence prevention activists and people affected by the ongoing gun violence crisis need to show up at the next NRA meeting and cause a non-violent disruption. Perhaps we need to show up in large numbers to demonstrate our outrage at the headquarters of Glock, Smith & Wesson, Beretta and other gun manufacturers who are lining their pockets while thousands die each year.  Perhaps we need to let Senator Toomey and other leaders who have a few shreds of dignity left that we appreciate their courage, and we want to see more of it.
No Senator we aren’t “moving on” and you best not either.
[Picture from Senator Toomey’s website]