Not Quite Harper Lee 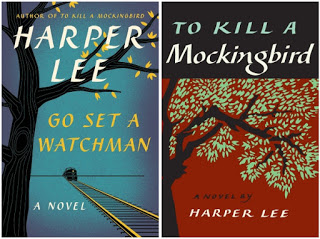 Go Set a Watchmanis Harper Lee’s recently released hidden and forgotten novel. While it is the sequel to her 1960 Pulitzer Prize winning To Kill a Mockingbird, it was actually written before Mockingbird, but was not accepted for publication. Instead Lee was urged to write her more famous and previously only novel. Watchman takes place in the mid 1950’s, 20 years after Mockingbird, as the now-26 year old Jean Louise (“Scout”) Finch returns to her hometown of Maycomb, AL for a visit.
Jean Louise has graduated from college, moved to New York City, and comes home to find a very different town than she remembers as a child growing up. Her older brother, Jim, has died from a congenital heart problem that also took his mother, and her good friend and would be-lover Hank has returned from fighting in World War II and is now practicing law with Jean Louise’s father, Atticus Finch. Atticus has aged into his 70’s, somewhat slowed by arthritis, but still a well-respected lawyer, and former Alabama state legislator. Calpurnia, the black woman who raised Jean Louise and served in her father’s house, has left because of her own arthritis and now lives with her family on the other side (read “black”) of Maycomb. In her place is Jean Louise’s aristocratic Aunt Alexandra, who takes care of Atticus and continually reminds Jean Louise to stick with her kind, meaning not just staying away from “Negroes” but also “poor white trash” like Hank. Jean Louise finds herself taken back at the racist, classist nature of her family and town, but her greatest shock does not occur until she sneaks into a meeting of the Maycomb [White] Citizen’s Council.

While a racist fear-mongering guest speaker spews bigoted hatred to a group of the town’s leading male citizens, sits Atticus and Hank at the leadership table implicitly affirming his racist views by their presence. Jean Louise is devastated to the point of vomiting she realizes her father’s involvement in the group and the views it holds. She is so traumatized she can’t speak of her it for days. When she finally shares her feelings, it is to her Uncle Jack, her father’s brother. Uncle Jack acknowledges Atticus’ involvement in the group and counsels Jean Louise to she see her father and beloved Hank are not and never were the idealistic icons of virtue she remembers as a child. He points out that while Atticus sits on the council, he does not share all their views, and is committed as a lawyer ultimately to upholding the law, whether it affects black or white. He points out that Atticus defended Boo Radley all those years ago in Mockingbird not because he believed Negroes and whites were equal or even should live together, but because he believed that everyone deserved fairness in a court of law whether they were black or white, rich or poor. However we learn that Atticus’s so called respect for the law is tainted by his resentment for the Federal Government’s orders to desegregate, and his objection to the NAACP who he sees as “outside agitators” who stir up trouble that “didn’t exist before” between blacks and whites in Maycomb.
Go Set a Watchmanonly tells this story from the perspective the whites in Maycomb, except for one brief visit Jean Louise makes to her black former maid, Calpurnia. Jean Louise remembers her as a surrogate mother who loved and cared for her. However, when she visits Calpurnia, she finds a woman filled with quiet resentment and distrust of Maycomb’s white folks. Jean Louise realizes that there was another side to Calpurnia’s life in Maycomb she never recognized and never could fully understand, that being a black person in Alabama in the 1950’s was to be a despised and degraded “other” who had to put on a nice face just to survive.
Jean Louise eventually confronts her father in deep anger, and decides to leave Maycomb, never to return. However, before she can catch the next train out of town, her Uncle confronts her and urges her to calm down. At his urging she returns and reconciles with her father, and that is where the story ends. The reader is left wondering what will happen with Jean Louise. Will she stay in Maycomb or go? Will she adjust to her father’s way of seeing the South, or will she stay and work actively to challenge the South’s racist ways? Her “problem” according to her uncle, and presumably to Lee, is that she has grown up and now sees her father as the fallible human being he is. The issue of racism, seemingly so prominent through much of the story, fades into the background by the end of the book. Instead of being a commentary on the racism of the South in the 1950’s, Go Set a Watchman becomes a coming of age novel, and racism merely a vehicle of Jean Louise new awareness of her world.

I found this ending both disturbing and unrealistic. Lee is/was a gifted author who has a way of bringing people to life in her dialogue, and she was writing at a time when the South was caught up in the throes of a growing Civil Rights Movement. In its time Watchman was a courageous book, and it is little wonder that Harper Collins was afraid to publish it, not wanting to alienate their Southern white constituency. While not mentioned, the time frame of the story means that the Montgomery Bus Boycott very well could have happened. The conflicts in Birmingham and Selma where yet to occur.
While White Citizen Councils of this time did consist mainly of upper class whites who looked down on the Klan as “white trash,” both groups were complicit in the ongoing injustice of Jim Crow, and the violence inflicted on the South’s black citizenry. Atticus Finch in his sophisticated racism is one of the “white moderates” Dr. King criticizes in his “Letter from a Birmingham Jail.” Despite their adherence to the law and decency, white moderates like Atticus Finch did little to stop the Klan’s violent activities. Moreover Uncle Jack’s assurance that there were many whites in Maycomb and Alabama who shared Jean Louise’s active abhorrence of racism, those whites who did act against the racism of the South like Virginia and Clifford Durr, Anne and Carl Braden, Myles Horton, Clarence Jordan and Robert Graetz were beaten, jailed, vilified as “Communists” and generally cut off from the wider white community (I tell the stories of these folks in my book, White Allies in the Struggle for Racial Justice). Harper Lee may have thought the South was changing gradually on its own, but the recent controversy over the Confederate flag, the shootings in the Charleston Emmanuel AME church, the numerous black church burnings that followed, and efforts by Alabama legislature to impede Blacks from being able to register to vote, reveal that without the Civil Rights Movement, the NAACP, Federal government intervention and much more, nothing would have changed. I fear that in the hands of white readers naïve to the real history of the South during this period, Go Set a Watchmanwill reinforce the ignorance and prejudices against seeing the struggles for black people in the America for what they really were and still are.
Harper Lee died a few years ago and so is not here to explain or defend what she wrote. In essence she needed to write a sequel to Watchman so that we could learn how it turned out for Jean Louise. Her Uncle Jack was right in saying she was not alone in her strong anti-racist views; there were white Southerners who fought to bring racial justice and equity alongside of their black counterparts, but there numbers were relatively few and their experiences difficult. Did Jean Louise join their ranks or did she quietly cop to the pressure to racist status quo of her era? We will never know. Instead we are left with what for me is an unsatisfactory, troubling and misleading conclusion.