Learning to Walk in the Dark 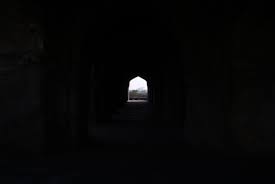 “Hello darkness, my old friend
I’ve come to talk with you again
Because a vision softly creeping
Left its seeds while I was sleeping
And the vision that was planted in my brain
Still remains within the sound of silence”
(Simon and Garfunkel, “Sounds of Silence”)
Over the last year or so, I have been learning to do what Barbara Brown Taylor calls “learning to walk in the dark (1).” In June 2015 I went on a seven-day spiritual retreat, which was both challenging and transformative. The challenging part had to with my inability to go thru the day without talking or interacting with people and spending an inordinate amount of time with myself. The transformative part began much later and is still in process.
Later in the summer, I began to feel myself slip into what I later came to understand was what St. John of the Cross called “the dark night of the soul.” The clear categories that were informing and guiding my life seemed less able to order my thoughts and help me understand the world around me. My sense of God always defined by Jesus began to take on more a sense of mystery, so much so that I wasn’t sure where God was or what I should consider God. I felt alternately and often simultaneously confused, depressed, anxious and overwhelmed. I wasn’t even sure who I was anymore or what I should be doing in this phase of my life. Outwardly, I carried myself pretty much as I always had, but inwardly I knew something was going on and I was not either willing or controlling its direction.
I turned to a spiritual guide I had found so helpful in times past, Thomas Moore, author of Care of the Soul and so many other good works. In his book Dark Nights of the Soul (2) Moore began to give me language to understand my experience. He described what I was going through as a liminal experience, an experience of transition, much like a cocoon-like experience. He also made clear that there was not much I could or should do, but go with it. So I did.
Then the university where I work began going through a re-evaluation that led to a significant downsizing, and our Urban Studies department of five was reduced to three, and we were informed that the faculty line of one of our members who was retiring would not be replaced, and so in September we will be two. This disruption, which occurred at the end of 2015 threw me into a deep hole and the feeling of darkness intensified. My workload significantly increased and I felt like I was of little help or comfort to my colleagues and my students. At times it was enough just to get through a week. Living through the aftermath of that downsizing has been a continuing challenge where I am asked to live with decisions for which I had no input, decrease my resources, and increase my responsibilities, and over which I have had little to no control.  While I have been overwhelmed, in a paradoxical way I have found a deeper sense of community with others going through the same experience. Misery and struggle has a way of bringing folks together, and it did for me
Then in the spring a friend gave me a copy of Barbara Brown Taylor’s book Learning to Walk in the Dark (1). Taylor helped me re-frame my experience from one of anxiety to one of curiosity. She helped me see that in these dark night experiences, there is much that I can learn about God, myself, and the world and people around me. She invited me to see the loss of control as a gift, much like the thrill of riding a roller coaster and lifting one’s hands when you go down the steep incline: frightening but exhilirating. She invited me to be open and receptive to what God, the universe, Life, Destiny or whatever one wanted to call it might bring into my life.
Psychiatrist and spiritual guide Gerald May (3) added further to my understanding by helping me see  that much like a seed in the ground or a caterpillar in a cocoon, or a baby being conceived, the most creative and fruitful things in life often occur in the dark. He helped me translate the writings of John of the Cross and Teresa of Avila (the two medieval mystics who first described this experience in concrete terms), and to see that the dark night is not just a temporary episode in one’s spiritual and emotional journey, but is an ongoing process of growth and discovery.
Just as I began to feel more at home with this experience, my 89-year-old father died in a way that for me was unexpected. At one level we all expect and hope that our parents will live forever, and that was part of it for me. The other was that after what for a few years seemed like a gradual decline, he quickly deteriorated and was gone. His death has left a void in my world that I did not see coming, and for which I was not prepared As a result I have entered a darkness of grief that I am still coming to terms with. 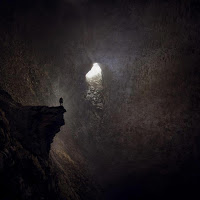 So here I am. I am learning to walk in the dark with less anxiety, more curiosity and greater receptivity. There are still times when I wake in the middle of the night with sharp pangs of anxiety, sadness, and feelings of being overwhelmed. I sometimes have dreams so vivid and unnerving that I don’t want to go back to sleep. Yet when I sit with the initial impact of these night time visitations, I try to turn my mind toward curiosity and what these messages in the dark might be saying to me. I am trying to see this whole experience as an adventure of sorts, where I am not in control and where I don’t know what will come next. I am learning to trust that whatever I encounter in the dark, it will not overcome me, but will draw me a place I never thought I could go.
So, I end with poem by Rainer Marie Rilke, which seems to capture my experience in the way only a poet can.

When I lean over the chasm of myself
it seems
my God is dark
and like a web: a hundred roots
silently drinking.
This is the ferment I grow out of.
(“Like a Web”, Book of HoursI, 3)