KENYA JOURNAL – NOT ON THE MAP

After 11 days working in Kibera and living in Huruma, we moved to a five-star hotel on the edge of the Nairobi Game Park. We stayed there for the last 3 days of our trip and rested and reflected on our work in Kibera. In a matter of 30 minutes we went from a community where people live on less than $2/day to a hotel where it cost more than that just to get a glass of juice, much less a whole meal. The contrast was striking and not a little jarring. Yet what struck me the most was the fact that these two communities exist virtually side by side, and yet know little of each other’s experience.

Communities like Kibera are not only populated by the deeply poor, but also refugees and migrants who have come to the city seeking hope and some income. In such places they can build temporary shacks and begin to scratch out a living. Kibera is reputed to be Africa’s largest slum, comprised of somewhere between 700,000 and one million people. By contrast the hotel we stayed in, Ole Sereni, attracts the wealthy Kenyans and wealthy tourists from around the world; I noticed Israelis, South Africans, Middle Easterners and wealthy Africans. These tourists by and large come to Nairobi, for business or to see the game park and go downtown, but never get close to the likes of Huruma, Mathare and Kibera.

This point was brought home to me in a profound way when I went into the hotel’s gift shop. I was interested to see a map of greater Nairobi to get a sense of where we had been and how we had traversed the city. However, the only maps of the city I could find focused on the downtown area with its businesses, banks and shops and did not even identify where the likes of Mathare, Kibera, Huruma or other impoverished communities were located. If you look at the map at the top of this page, you see the kind of map I found in the store; no Mathare, no Huruma, no Kibera. On the map below you can see Mathare to the northeast and Kibera to the southwest of downtown Nairobi. Huruma is located adjacent to Mathare.

Looking at the map above, it was if the poor communities and the people in them did not even exist. How in the world can one simply “overlook” the existence of millions of people? There can be only one answer: such people don’t “count” in the minds of the political, economic and social elite.

Paulo Freire begins his classic work, Pedagogy of the Oppressed, equating oppression with dehumanization, and dehumanization he explains is treating people as if they are objects rather than sentient human beings. Whether one talks about racism, poverty, sexism or oppression in its many forms, the only way one can justify such conditions is to regard such people of low or no value. We see this not only here in Kenya, but also in the US when legislators can deny poor black and brown students adequate funding for their schools, or regard citizens of color as not worthy of the same basic civil rights as white folks. While in the US poor communities like Chester, PA, Camden, NJ or North Philadelphia might be identified on a map, when it comes to basic services and adequate provision for basic needs, they might as well not exist. Here in Nairobi they just omit them from the map.

In the Gospel of Matthew, chapter 25 Jesus tells the Parable of the Sheep and Goats. The key to that passage can be found in the words “When you did it to the least of these my brothers and sisters, you did it unto me.” That is, the degree to which you align yourself and commit yourself to the causes and concerns of the poor is the degree to which you have aligned and committed yourself to Christ. On a social, political and economic level this means that the justice and efficacy of a society is evaluated on the basis of how it treats its most vulnerable citizens. The starting point is to make sure, no matter what our station in life, that those vulnerable citizens are on the map of our worldview and actions. 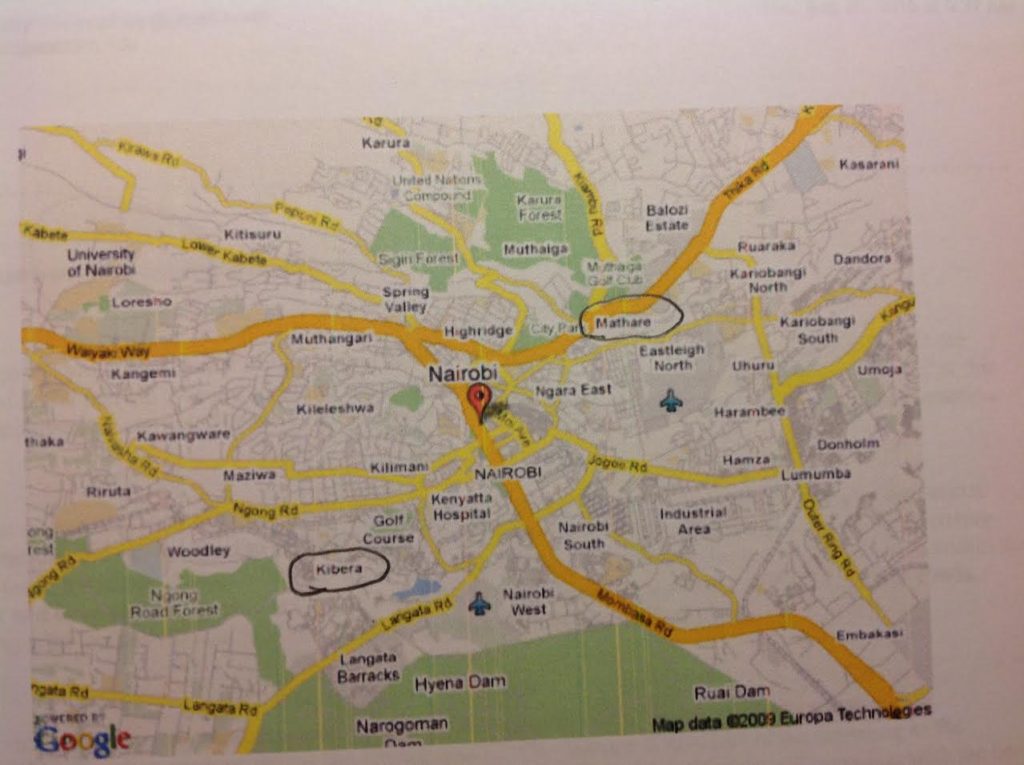