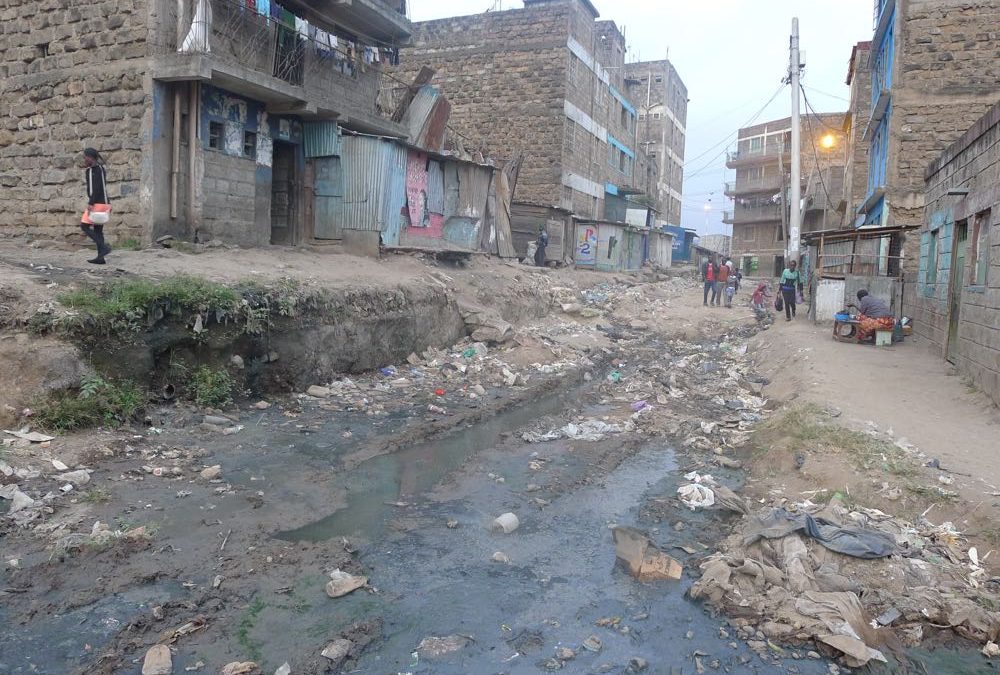 [This reflection was written after one particular day walking through Huruma, and I decided to keep it in the present tense to capture the immediacy of the experience] 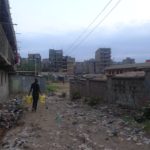 Man walking in the morning

Because the road to the Flatted Fifth, the guest house in the Huruma where we are staying, has been torn up and there is a growing “lake” of stagnant water gathering there, we decided to have our pickup and drop off points about a tenth of a mile further away than before. We are let off at a place called “Indiana junction” in the market area and then we walk along a relatively smooth path thru shops and homes, stepping carefully to avoid sewage in the road, or dead animals like mice and birds. However, that’s not the most difficult part of the walk. After a few days the smells and trash, while repulsive, is something I have gotten used to. 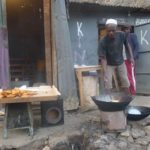 Baker who made our morning chapati

What is challenging is walking thru all the people shouting “mzungu” (white guy/ foreigner), and looking curiously, but also friendly. The children shout “mzungu” and “how are you.” Many stick out their hands wanting to give you a high-five, a shake, or a fist bump. Older kids look more suspicious as do many adults. But even some of them shout as well. The thing is you know you are spectacle, and for some a person who might be able to give money. For that reason we walk in a group with our Kenyan guides back and forth. The hardest encounter occurred the other day when a two-year old boy followed me a around saying “sponsor, sponsor”, wanting to be a sponsored child, while his father stood by talking to me. On our ride home today, we also saw street children standing along the road, dirty and bedraggled, trying to wipe dust off the windshield for some money or just standing, staring vacantly with long and sad, blank faces. Rodgers one of the workers I met, estimated that there are one million homeless children in Kenya, most located in Nairobi. 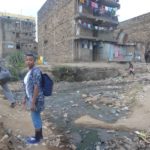 Sanovia on the path

The depth of poverty in Kibera, Mathare and Huruma, the three areas where we have been spending our time, is mind-boggling. Of the three, Huruma is the most developed because its buildings are made of concrete rather than mud, wood or sheet metal, and therefore more permanent. There is poverty in the US, but existence in these Nairobi slums is even below the deep poverty experience in Philadelphia, Camden and throughout the US. Not that this somehow negates or relativizes U.S. poverty, but Huruma just reveals a survival level existence that is hard to imagine until one sees, smells and touches it in the hands of the little children. 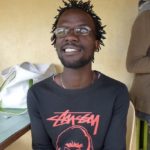 Godfrey who lives in Huruma and raised chickens

At the same time, there is a liveliness in the slum that is amazing from my Western perspective. People are industrious, active, and friendly in spite of their difficult conditions. Yesterday, Godfrey, one of our attendants and guides, took me on a walk thru the neighborhood and introduced me to two of his friends, who are raising goats, chickens, ducks, pigs and pigeons. They are harvesting bamboo for a number of uses all within a few yards of the Mathare River. The river itself is filthy will any kind of sewage and human waste one could imagine. These friends are also constructing a building of cement blocks while will be two floors and have 10-12 apartments when completed. The work is slow, but their vision is clear and their spirits are positive. Godfrey himself has a project, which until a year ago was raising chickens, but he lost 40+ chickens to bird flu and so lost everything. Yet he is slowly saving money to start up again. 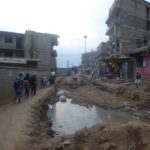 What strikes as we walk through Huruma, is that while at one level this is a place on the edge of survival, it is also a place of hope, industriousness, and vision. For these folks this is their home, but also is a place of possibility, and a place that is on the rise. When I think of looking for hope in unexpected places, I can’t think of any better place to start than in the slums I have visited on this trip. This is not to romanticize or gloss over the poverty here, but also to recognize that in very real ways God dwells among the poor, and that I have seen and met God in ways that are hard to describe or imagine.

So I walk through Huruma, knowing I am spectacle, a mzungu, but also know that I have been blessed to be accepted for this brief time and to have received far more than I ever could have given. 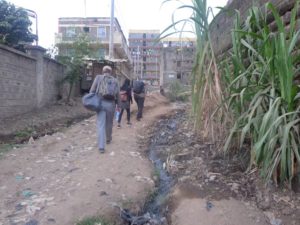