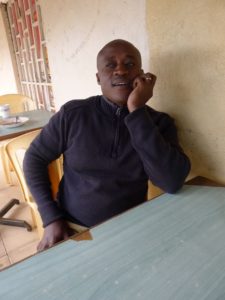 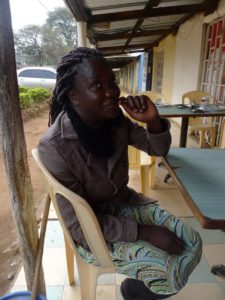 Here are pictures of Sarah Ochieng and Mark Olila Odongo. These two folks are nothing short of amazing in my book; they were the folks who drove us around Nairobi in what was the most chaotic driving situation I have ever encountered. Let me explain

Every morning for ten days our team arose by 6 am and by 7 am we were on the road from Huruma on the Northeast side of downtown Nairobi where were staying to Kibera on the Southwest side of downtown where we were working in the Little Rock School. While only about 10 miles the trip took anywhere from 60-90 minutes both ways depending on the time of day and the amount of traffic. However, the time factor was only one small aspect of the experience.

Imagine a New York City traffic jam at rush hour without any lights or stop lights to regulate the traffic flow. Then add motorcycles, buses, hand carts, bicycles and pedestrians all occupying the same road while you are trying to negotiate the traffic. Add to that scene, dust, exhaust, fumes honking horns and people shouting, and you might get a small glimpse of the experience of driving in Nairobi. Cars gently ease their way in, around and through roundabouts, weave around pedestrians crossing the street, and motorcycles cutting back and forth through the gaps in traffic. Sarah, and Mark our drivers patiently made their way. Occasionally, there was an opening of a quarter-mile or so and they would speed up, but then it was back to this dance and crawl called Nairobi traffic. Several days I sat in the front of Sarah’s Toyota as she worked her way through traffic, sometimes passing inches from a car, truck or human being, but never hitting them. I never felt like we or folks on the street were in danger, she was so adept, so patient, and so exacting despite the crowded streets. 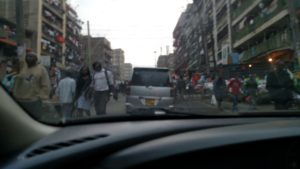 At the beginning and end of our trip when we were leaving and then entering the slums, the main roads which would be considered quite rough by US standards became rutted dirt roads with huge holes around whi ch the cars, buses and motorcycles maneuvered. Traffic was even more crowded in the slums because there was less road for the same number of people. I thought of the SUV and Jeep commercials where the vehicles climb up the side of mountain; if they want to really put those vehicles to the test, they ought to run them thru Mathare, Kibera and Huruma. At the end of the day our driver would turn down a narrow “alley” (read “dirt path”) passing people and kiosks set up with all sorts of goods with just a foot or two to spare on either side. This alley was also not smooth but filled with ruts and stagnant water not to mention bikes, motorcycles, children and adults making their way.

In order to get a license in Kenya, most people go to driving school, where they learn the basic rules of the road. However,when they actually get out on to the city streets, all those rules are what my friend Danny Hankey used to call these rules “suggestions,” ( Danny ended up having a serious accident that nearly killed him). However in Nairobi, the rules generally don’t apply because one does whatever he or she ca 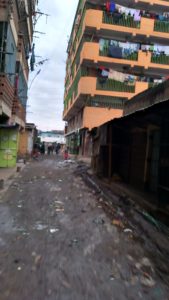 n to maneuver through the maze of cars and other vehicles in whatever way works without hurting anyone or anything.

In addition to the mechanics of driving, there were several days that I chose not to open my window even though the breeze would have felt good. Any coolness I might have received from the breeze was more than offset by the dust and smog. The first few days my eyes burned and my throat hurt. I only had one day when my asthma seemed to be triggered, but then I was taking all sort of medicine as a preventive measure. The windshield of the car was caked with dust and soot, and I surmised that was what my lungs were contending with as well. The one mediating factor is that it was not hot and humid as it often is in Philadelphia this time of year; if it had the smog and dirt could have been even more unhealthy.

They key to safe driving, it seems to me, is being able to anticipate the actions of the other drivers on the road to avoid running into or over one another. There is a sort of rhythm and pattern the way people drive, and as long as one knows that rhythm he/she can be safe. After two weeks riding the roads of Nairobi and the especially the ten days back and forth between Huruma and Kibera, I had no sense of the Nairobi pattern and rhythm, but I believe they are there because Sarah and Mark certainly knew them.

Nairobi is a mega-city with all the advantages and challenges that it’s mega-size brings. There are sections of the city we passed through where the vegetation and houses were beautiful, but because we were spending most of our time in the slums, we experienced the rougher side of the road. However, Sarah and Mark were masterful, and made what could have been a frustrating daily trip to and fro, an adventure and spectacle of truly amazing proportions. 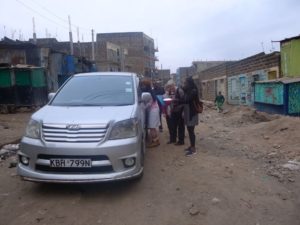