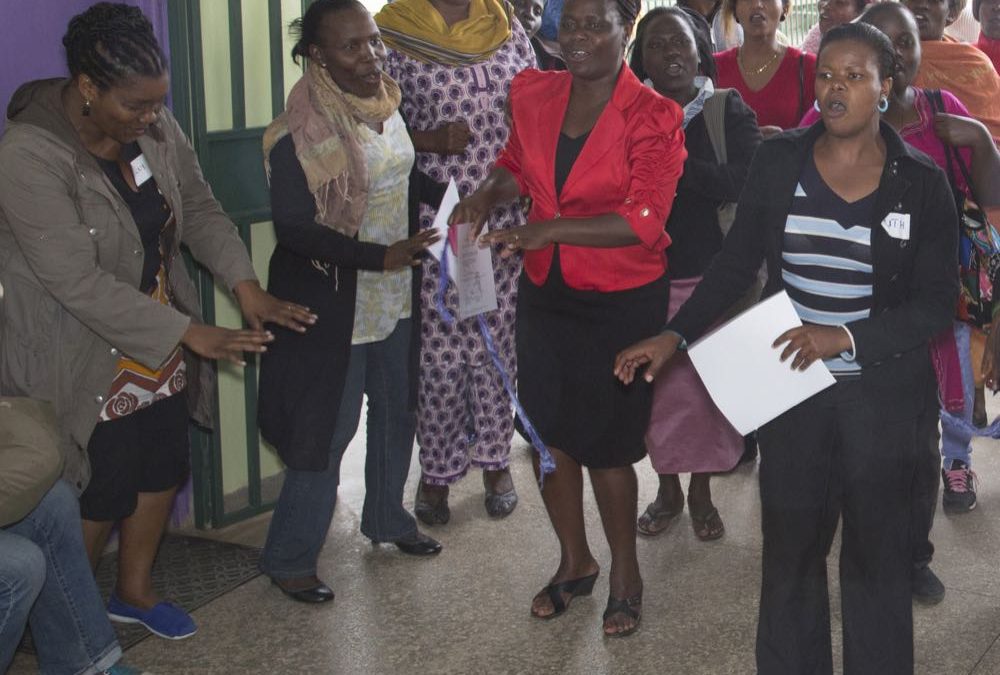 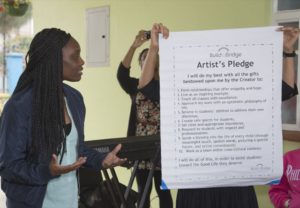 The general purpose of our trip was to introduce an approach called “arts-integrated teaching” to teachers and artists in the Kibera (Ki bee ra) slum southwest of downtown Nairobi. Our original plan had to be altered when our original target audience did not show. However, we were able to train the teachers of Little Rock School, an amazing oasis in a difficult slum. Little Rock runs an inclusive program, meaning it has kids with disabilities – wheelchair, deaf, mental retardation, everything but total blindness – along with kids without disabilities from Preschool thru Kindergarten. They also run an after school program for kids grades 1-8, and a support program for high school kids. These are highly committed teachers doing amazing work with limited resources. We taught 40 or so these teachers the arts-integrated approach, and then some of them in turn lead the program with kids the second week. 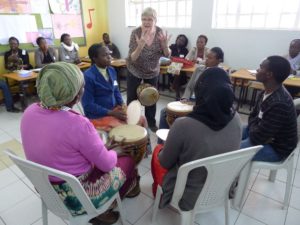 Gene Ann & Music and the Brain

The model for arts-integrated teaching was developed by Dr. Nathan Corbitt and Dr. Vivian Nix-Early, the co-founders of BuildaBridge International, one of the co-sponsors of our trip (the other was Eastern University). Essentially arts-integrated teaching uses various art forms to teach academic subjects and life skills. Through music, movement, drama, visual art, poetry and much more, children and adults are able to grasp topics that otherwise might be taught by rote or didactically. I discovered in the midst of this trip that I had been using this approach for years, but didn’t know it. 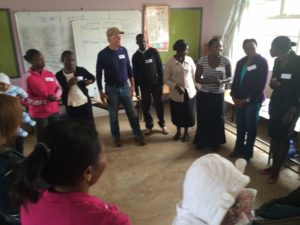 During the first week I taught a course on Emotional Intelligence for Teachers using drama techniques. While my daughters were always involved in theater, I hadn’t been in a play since middle school. However, years ago I began adapting and including techniques I had experienced while attending workshops on Augusto Boal’s Theater of the Oppressed work. Boal was a Brazilian counterpart to Paulo Freire who used theater to raise social and political consciousness much the way Freire did with dialogue and problem-posing. I would use techniques like human sculpturing and role plays because they were fun and brought fresh meaning to some of the concepts I was trying to convey. It didn’t dawn on me on this trip that I have been using an arts-integrated approach and didn’t even know it. I was just committed to the idea of “whole body learning” believing the more of our senses and muscles we use for learning, the more effective the learning will be. 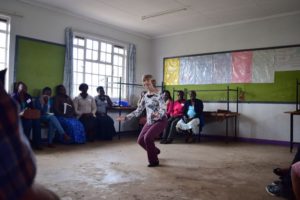 Others in our group used the arts in different ways. Judy, a dance instructor form Whitworth University in Spokane, showed how movement could be used to connect the physically disabled with the able-bodied. Gene Ann, a music therapist from Elizabethtown (PA) College, discussed the impact of music on the brain. Sanovia and Stacey showed how one could teach children about the solar system using poetry and music. Everything were using and modeling an arts-integrated teaching approach.

The second week, moved from the teachers to the kids, and some of the teachers from week 1 led the classes with the kids using the arts-integrated approach. I worked with Judy, the dance instructor, in supporting two Kenyan teachers who did a marvelous job teaching the solar system thru the use of dance. If it is hard to imagine, I understand, because even I had my doubts when I realized we were assigned to 5-6 year olds. Initially it was clear that they knew nothing about the solar system. When asked about “solar” they knew of solar energy and solar heat (which is a great thing), but nothing about the planets or the solar system. However, by placing kids in relative positions, giving them different movements, having them move around the kids who represented the sun, they grasped the key concepts after only three days. 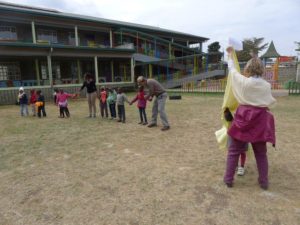 Lining our kids up into the solar system

Generally speaking the children were very respectful, but still they were young, and their energy was seemingly boundless. Movement/dance is a good medium for them because they are moving all the time anyway; all we had to do was harness that energy to represent planets orbiting the sun! Not having spent much time with this age group I am impressed by two things. First, I am so impressed with how quickly the kids seemed to be picking up the information. Second, I am amazed at teachers who work with this age group all the time. The kids were delightful, but after less than two hours I was wiped out; and preschool and elementary teachers do this throughout the year! I have always had respect for teachers, but even more so now. I will take grad students any day! 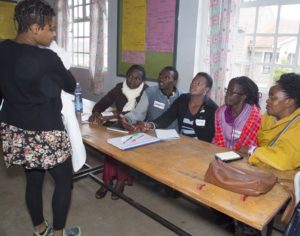 The education system in Kenya is based on the British system: primary school 1-8 grade, then high school 9-12. Exams are the basis of one’s promotion from primary to high school and high school to college. We talked with our drivers and attendants who are in their 20’s and 30’s and though they had graduated, and in a few cases even had some college, they hated the system because the whole thing is geared toward the exams. Interestingly a group of women educational researchers came out with a report while we were here saying the Kenyan system depended too much on exams and not enough on values and critical thinking. Sounds like a report we could use in the US (though I must say the Kenyan system seems far worse). Seeing what Little Rock School is doing, and how our Kenyan teachers picked up the arts-integrated approach was encouraging, but there is tough road to climb to bring about the change that is needed. I have seen the value of this approach for real learning, and can only hope we have planted some small seeds.