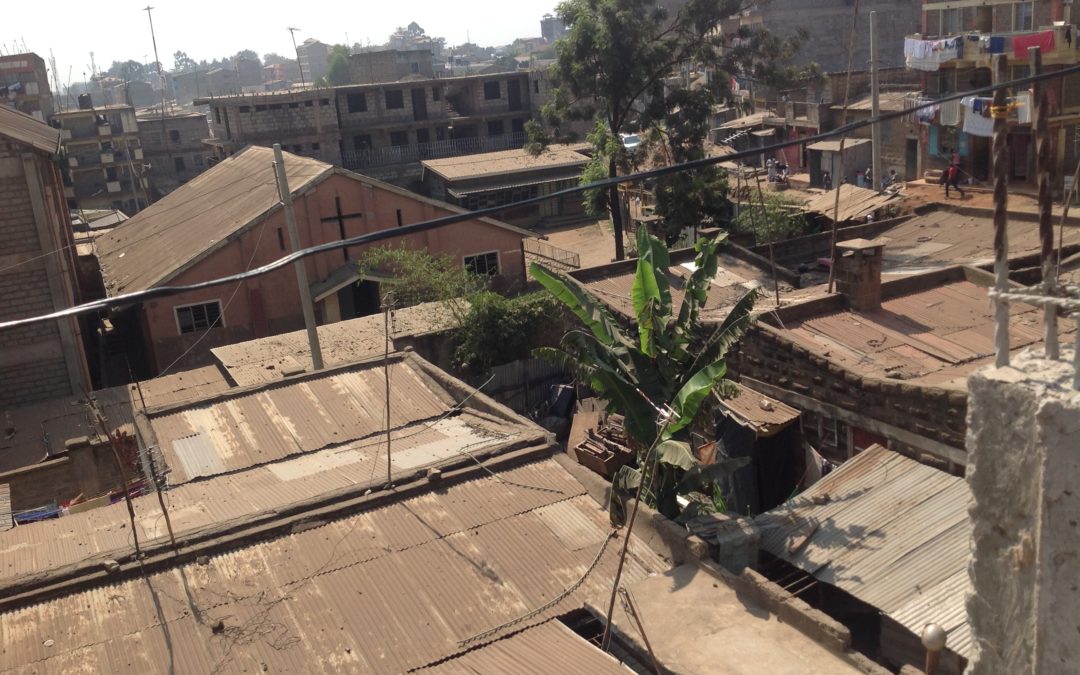 NOTE: From July 31 to August 15,  I traveled with seven other folks to Kenya as part of a project sponsored by Eastern University Urban Studies Program and  BuildaBridge International in cooperation with the Center for Transforming Mission based in Nairobi, Kenya. While on this trip I kept a journal of observations and reflections. Over the next several days I will be posting those reflections of this trip. 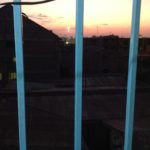 After 27 hours of travel from Philly to New York (by car),from JFK Airport to Dubai, then to Nairobi, we landed about 8 in evening. However it was another two hours, before we were picked up by Moses and Mark from  Inspiration Centre Mathare. The city was dark, and so all we could see were shadows on either side. As we neared our destination, the road surface seemed to become rougher and bumpier. Then we turned off the pavement and onto a dirt road which took us into Huruma, our home for the next 10 days. The narrow, rutted, bumpy dirt road was lined on either side by little shack-like kiosks, but hardly anyone was out, as it was nearly 11 o’clock in the evening. After a couple of turns, we turned left onto a narrow path and abruptly stopped because in front of us were large rocks pulled from earth where the path had been. We were at a our new home, but where were we? 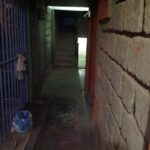 Our hallway in the Flatted Fifth

The van and truck stopped, we pulled out our bags, and Godfrey who would be our guide, attendant and friend, led the way with his flash light. I activated the flashlight on my phone and followed along with the others. The path was dirt and dust, with large stones embedded i nthe dirt, small rivulets of water, trash everywhere, and a powerful stench. Because of almost year round allergies I often can’t smell what others smell; the fact that I COULD smell it, let me know that the stench was powerful and strong. After hiking about 100 yards through the relatively quiet path between buildings, we came to a step with a metal door. Godfrey led us through, and indicated we were home: The Flatted Fifth, a guest house and apartment building in the heart of Huruma owned and operated by Inspiration Centre, a church and community ministry led by Moses and Jaime Okonji. In addition to rooms for guests like our group, there were rooms for families and a section set apart for six young women seeking to rebuild their lives after escaping  forced prostitution when they were only children. 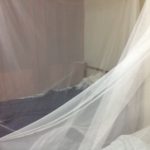 My Bed in the Flatted Fifth

We were led to our rooms, then given some Chai, a favorite beverage of many Kenyans. My room was small with two single beds covered with mosquito nets, and a small bathroom/shower. We entered through a metal door with a small hole about waist-high that clanged and squeaked loudly when it opened and closed. For the next 10 days Nathan Corbitt and I would share this “cell” (as he called it).

I was so exhausted I just plopped my bag and knapsack down, and went to bed, sleeping soundly for the next 8 hours or so. When I awoke the sun was just coming up and I saw the neighborhood in the early light for the first time. The narrow hall way outside my room was lined with bars I looked through to see out. Godfrey invited me up to the roof, which actually was an additional floor of the building in the process of being constructed. As I look around I saw the roofs of Huruma. I could hear people talking in their homes and  people moving about on the dirt paths below that passed for walking lanes amidst trash and streams of water, the same paths we had walked over the night before in the dark. Huruma had awakened and as the days went by, this pattern would be repeated each morning.

We had come as a diverse group of folks to offer training to teachers, artists, and community workers on arts-integrated, trauma informed teaching methods. Our group included Nathan Corbitt and Vivian Nix-Early, the founders of BuildaBridge International who sponsored this trip; two Urban Studies students Sanovia and Stacey; Judy, a dance/movement instructor from Whitworth University in Spokane, Washington; Gene Ann, a music therapist and professor at Elizabethtown (PA) College; Kelly, a middle school art teacher from New York City; and me. Along with our Kenyan guides and hosts Godfrey, Mark, Millie, Ann, Moses and Jaime, we would build  community called the Flatted Fifth, our home.

After the first day, Nathan asked me how I felt, and I said “overwhelmed.” While I had lived and worked in low-income communities, Huruma, Kibera, and Mathare, where we would live and work, revealed a level of deep poverty I had never seen. While I had read about these communities, heard from those who had been there, and seen numerous pictures, one has to come and live there to fully appreciate and understand the nature of life in these communities. To me these communities were both horrific and amazing. Horrific because of the living conditions, but amazing because in the midst of it people are raising families, working, carrying on commerce, and making a living out of little. Certainly Huruma is not all of Kenya, for there are many Kenyas. But this is the Kenya I came to know, and to me, their example was to teach me in ways I could not and still cannot fully fathom. 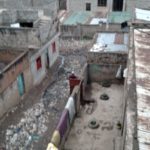