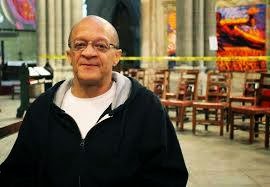 This past Thursday, May 14 I learned of the passing of a good friend, Kemah Washington. Kemah and I were brought together on a cold January afternoon in 2009, when we joined 10 others in protesting the process of straw purchasing being conducted in and through Colismo’s gun shop. Fred Kaufman, Kemah and I sat down in front of the door leading into the store, when they would not allow us to enter to ask Mr. Colisimo to sign the Responsible Gun Dealer’s Code of Conduct. In and through that protest, the interfaith, gun violence prevention organization Heeding God’s Call was born.

Kemah, Fred and I were put in the same cell, and for much of that time Kemah talked about his late father, Fr. Paul Washington, former rector of Church of the Advocate in North Philly. Fr. Washington was an organizer, an activist, and a man of God who lived his faith out in a pursuit of justice. As one drives down Ridge Ave in North Philly across from Fairmount Park, there is a building size mural of Fr. Washington overlooking a playground – a tribute to Fr. Washington love for the people of North Philly. Kemah told us story after story of the how his father had worked for the improvement of his community, and what an amazing activist and person he was.

Because of his father’s experience and his own efforts to bring about change, Kemah knew what often happened to Black men in a jail cell – they ended staying much longer than need be. I could see that the 12 hours he spent there really wore on him. He confided to me that while he was glad he took part in the action against Colisimos, he didn’t want to spend any more time in jail than he had to. I was glad when he was released 12 hours after we were arrested. I stayed another 13 hours, but I am sure it would have run him down; I know it did me.

While not as famous as his father, Kemah was well known in North Philly for his efforts to carry on his father’s mission, sponsoring all sorts of community events, including an incredible jazz festival of local artists and poets. I attended one of those festivals; it was nothing short of amazing. After our arrest and trial, Kemah continued to stand outside Colisimos twice a week calling attention to complicity in the straw purchasing process. I sometimes joined him thru the hot summer days out there, and we would share stories of life. Every time I saw him he simply referred to me as his “cellmate.”

Kemah and I came from different worlds. I grew up in a comfortable Midwestern suburb while he was raised in the stressed community in North Philly. Yet the act of civil disobedience brought us together, and in the midst of our shared experience we realized we had much in common: the love of families, concern for our kids, frustrations with our jobs and a desire to see a safer, less violent city.

In the last few years my main contact with Kemah was through email and Facebook. He was always sending out announcements about various cultural and political events in North Philly from concerts and poetry readings to gatherings to call for the release of death row inmate Abu Mumia Jamal. I had recently heard he had gotten sick and I wanted to reach out to him. I did not realize it was this serious, and now I regret not reaching out earlier. However, mostly I am grateful for having known and shared a special moment –albeit in a grungy, smelly jail cell – with this humble man of God who cared so deeply for people and who touched so many lives – including mine.