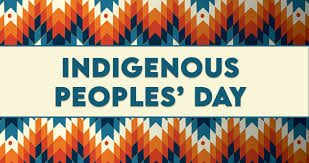 Today (October 11) is Indigenous People’s Day. Formerly called Columbus Day, this day has gained increasing recognition as we have become aware of the atrocities against indigenous people by Columbus and later the American colonists. Today seven states recognize Indigenous People’s Day as an official state holiday, and another eight recognize it by proclamation. So why is it important for us to remember this day?

A recent Presidential Executive order banning all diversity trainings in Federal government departments states that when the nation’s founders wrote “ We hold these truths to be self-evident that all men are created equal,” they were affirming their belief in “the inherent equality of every individual.” And yet in that same document, The Declaration of Independence, the indigenous people were referred to as “merciless Indian savages.” They were not mentioned at all in the U.S. Constitution and Blacks were regarded as 3/5 a person for census purposes. Every person was NOT given equal status. This is part of our history many don’t want to hear, but it explains the ongoing struggle of BIPOC (Black, Indigenous & People of Color) to make those words about equality true for them.

The fact is that all of us who are not Native Americans are living on stolen land. That theft and subsequent genocide against indigenous people was justified by a series of Papal bulls known collectively as the Doctrine of Discovery that gave explorers and colonists the Christian obligation to “invade, search out, capture, vanquish and subdue” all groups and persons who were not Christians, to possess their land, and reduce them to “perpetual slavery.” This was the authority Columbus brought to the Americas. Later, Thomas Jefferson declared the Doctrine of Discovery to be integral to American Law and the Western expansion into lands occupied by various Native American tribes. It was this sentiment that moved President Andrew Jackson to sign the 1830 Indian Removal Act, which forced tribes living in the American Southeast to move west on the “Trail of Tears” so white settlers could occupy their lands. As recent as 2005 the Doctrine of Discovery was cited in the U.S. Supreme Court. So this is not ancient history; we are talking about our current reality.

In 2016 the native peoples of North Dakota protested the building of the Dakota Access Pipeline through their lands and particularly that portion of the Missouri River in their lands, claiming it is central to their religious 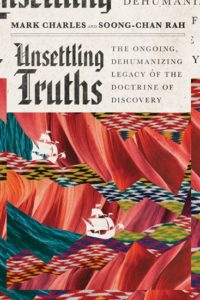 and cultural heritage and should not be violated. Even now various tribal groups are in the nation’s courts seeking to gain some title to land that had been taken from their ancestors. This is not ancient history.

In his excellent book Unsettling Truths, Native American scholar Mark Charles offers a metaphor for our consideration. He writes:

“It feels like our indigenous people are an old grandmother who lives in a very large house. It is a beautiful place with plenty of rooms and comfortable furniture. But years ago some people came into her house and locked her upstairs in the bedroom. Today her home is full of people. They are sitting on her furniture. They are eating her food. They are having a party in her house. They have since come upstairs and unlocked the door to her bedroom, but now it is much later and she is tired, old, weak and sick; so she can’t or doesn’t want to come out.

But what is most hurtful and what causes her the most pain is that virtually no one from this party ever comes upstairs to find the grandmother in the bedroom. No one sits down next to her on the bed, takes her hand and simply says, “Thank you. Thank you for letting us be in your house.”

Saying thank you is more than just words but requires us to come to grips with the callous actions of our ancestors and work with our indigenous brothers and sisters to find ways to admit our cruelty and make amends. On this day, the very least we can do is give these ideas some thought and say “thank you” for those whose land we inhabit. We can commit ourselves to learn more about Native American history that has been suppressed and ignored in our history books. We can expand our understanding of our American story and the land we live on as something more than our own, as a big house in which we are guests.