In Response to the Police Shooting of Walter Wallace Jr. 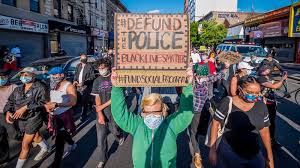 As I write this there is the second night of protests in response to the police killing of 27-year-old Walter Wallace Jr. in West Philadelphia. If ever there was an argument for defunding the police and redistributing those funds to mental health services, this is it. According to White’s mother her son was in the midst of a mental health crisis. She tried to stand between him and the police. His father watching the event unfold, asked why didn’t they use a taser? Why didn’t they shoot to wound and not to kill? I ask the same question.

I am not a member of that community, but I recognize the source of the anger and rage this event evokes. I understand why marchers responded with violence against the police. I don’t advocate violence but I understand it. If Philadelphia had a system of neighborhood safety that used violence less and mental health crisis workers more, Walter Wallace Jr. would be alive and getting the help he desperately needed. He was more a danger to himself and his immediate family than he was to the police; yet they in their get-tough, law-and-order mindset they shot another young Black man. So sad, so wrong, so unnecessary.

I live in a suburban area where there are a number of “We Support Our Police” and “Blue Matter Signs.” A few months ago when I put up a “Black Lives Matter” sign on my lawn, one neighbor hung a thin blue line flag (a sign of police solidarity) over his deck facing the back of my house. These folks don’t get it. Police aren’t shooting their loved ones or bringing chaos and trauma into their neighborhood. In West Philadelphia, like many low-income communities of color, the police are seen as a threat of potential violence. People in that community want the police to protect them, not kill them. This is what is so disconcerting and traumatizing. But you don’t see “Blue Lives Matter” signs there because they have not acted as if the Black lives in that neighborhood matter.

I have no words for the folks of that neighborhood, except to say those officers do not represent my sentiments or my values. I am so sad. So angry. So amazed at how again and again police re-create the same anguish and death in Black communities. When will they learn? When will they change? If they don’t change, we must force the change for the good of all. Defund the police and redistribute those funds for the purpose of neighborhood safety and not neighborhood tragedy.